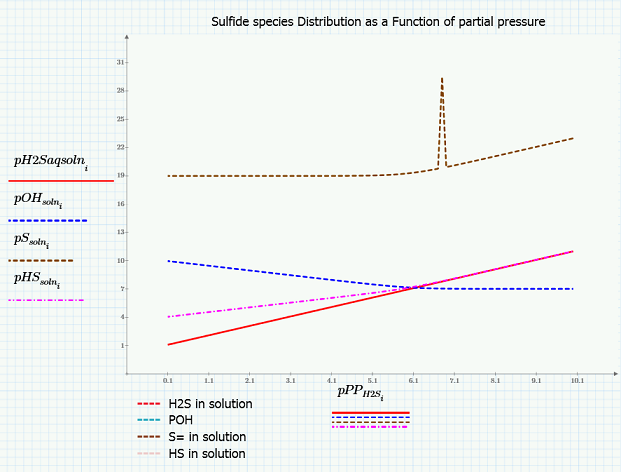 This worksheet using Mathcad sets up a problem where a 500 ftᶾ pump station well contains 500 gallons of anoxic wastewater. The bacteria in this wastewater produce H₂S which both produces a bad smell and can be dangerous for workers. This worksheet helps you to find what fraction of the total moles of sulfide would exist as H₂S and how much of it would escape into the overlying wet well atmosphere. To begin, this worksheet provides an equation according to Henry's Law, which describes the partitioning of H₂S between the liquid and the overlying gas phase. This produces 6 unknowns, which requires 6 equations for solving.

The worksheet then provides you with some initial guesses and also sets up constraints so that all concentrations must be greater than zero. Next, the worksheet defines a function, which is actually a solve block, to find the equations for each value of the partial pressure of H₂S. This is then graphed to show the Sulfide species distribution as a function of partial pressure. Next you are shown how to compute the fraction of the total sulfide that exists in the gas phase as a function of the partial pressure of H₂S and how to compute the fraction of total sulfide that is in the gas phase at this pH. This is then graphed.

This worksheet helps you to solve a set of 6 simultaneous equations 100 times and then plots each species as a function of the overlying partial pressure of H₂S. Henry's Law also is used to determine how the H₂S partitions itself between the aqueous and gaseous phases.

All notation, formulas, calculations, solutions, graphs, and summaries have been provided to help you in your own calculations.

Download and explore this worksheet yourself! You can download a free lifetime copy of PTC Mathcad Express and get 30 days of full functionality.