Is there a how-to-do "layering/layers" book utilizing Creo?

Is there a how-to-do "layering/layers" book utilizing Creo?

I am curious to know if there is a book, power point presentation, etc...

This book would describe every facet of utilizing layering/layers within the Creo world.

If the book has problems to show what is needed to correct the problem like exercises to fix. This would be good.

I look forward to your replies

Thank you, I have that presentation but I am looking for more

In that post, I also linked to a very extensive thread at MCAD Central‌ on layers that included Glenn Beer's presentation that was my inspiration.  Lots of info there, but, being a forum, not necessarily well organized.

I'm not aware of any book on layers.

Layers are trivial. What problem are you trying to solve?

Here at work... looking to develop a standard for layering.

I have a ton of work to perform and having more work on my plate, I thought I might find something online.

What do you plan to do with layers?

My standard is to assign layers for functional reasons as an indicator to other model users for the function of the related items. That means around 5 layers, tops.

For example. all default csys, datums, whatever, goes on DEFAULT_GEOM layer as part of the template model.

Anything that is used as an intermediate goes on CONSTRUCTION and is necessarily applied manually.

I don't waste time with automatic rules that are so popular - placing items on layers named for things they are. Some put all surfaces on the 'SURFACES' layer - but what difference does that make. Anyone can tell a surface is a surface no matter what layer it's on and Search can find anything at any time.

The only exception was SET DATUMS, but PTC has made that such a mess it's not worth fighting anymore. Apparently someone high up in PTC decided that uncontrollable display of SET DATUMS were important enough to add an unending workload for no reason and that they will never be fixed.

For example, the useless layer setup:

I've seen models where the first 40 entries were various spellings of DATUM this and DATUM that and mixed up combinations of numeric prefixes. Any user has to scroll pretty far to see anything that is important.

For me the purpose of standard PLANE, SURFACE, AXIS, etc. layers is to gather all "layerable" things on default layers so I can turn them all off.  I can then create layers for functional areas (MOTOR_MOUNT for example) and add all items of any type to them and then use isolate to turn only those on.  I could use a single DEFAULT_GEOM layer for all the standard stuff like you suggest, but having dedicated layers for specific kinds of items simply makes the layer rules simpler.  It does give me some flexibility with just the default layers too.

I have only 10 default layers, which is pretty manageable: 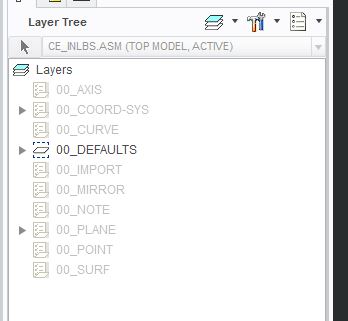 Not sure if this is what you might be looking for, but there are some good methods of Rules Based Layer Control in this video by Leo Greene.

Seems the attachment didn't work correctly, so here is a link:  It is based in WF3, but most of the methods are still valid.