We are looking here at some  ways to implement it.
We are going to use one of the Nasa dataset publicly available that simulates the Turbofan engine degradation (https://c3.nasa.gov/dashlink/resources/139/) .
The original dataset has got 26 features as below

In the training dataset the sensor measurement ends when the failure occurs.

Since the prediction model is based on historic data, the data collection is a critical point.
In some cases the data would have been already collected form the past and you need to make the best out of it. See the Data preparation chapter below.
In situation where you are collecting data, a few points are good to keep in mind, some may or may not apply depending on the type of data to be collected.

Before going into data preparation and model creation we need to understand what information is important in term of TTF prediction for our business need.

There are several ways to conceive the TTF, for example:

Once this TTF column is defined, we may need to transform it further depending on the path we choose for TTF prediction, as described in the TTF business need chapter.

In the case of the NASA dataset we are choosing a range TTF with values of more100, 50to100, 10to50 and less10 to represent the number of remaining cycles till the predicted failure.
This is the information we need to predict in order to plan a suitable maintenance action.
Our transformed TTF column look as below:

Once the data in csv is ready, we need to create the json file to represent the metadata.
In the case of range TTF this will be defined as an ordinal goal as below (see attachment for the full matadata json file)

Once the data is ready it can be uploaded into ThingWorx Analytics and work on the prediction model can start.
ThingWorx Analytics is designed to make machine learning easy and accessible to non data scientists, so this steps will be easier than when using other solutions.
However some trial and error are needed to refine the model which may also involve reworking the dataset. 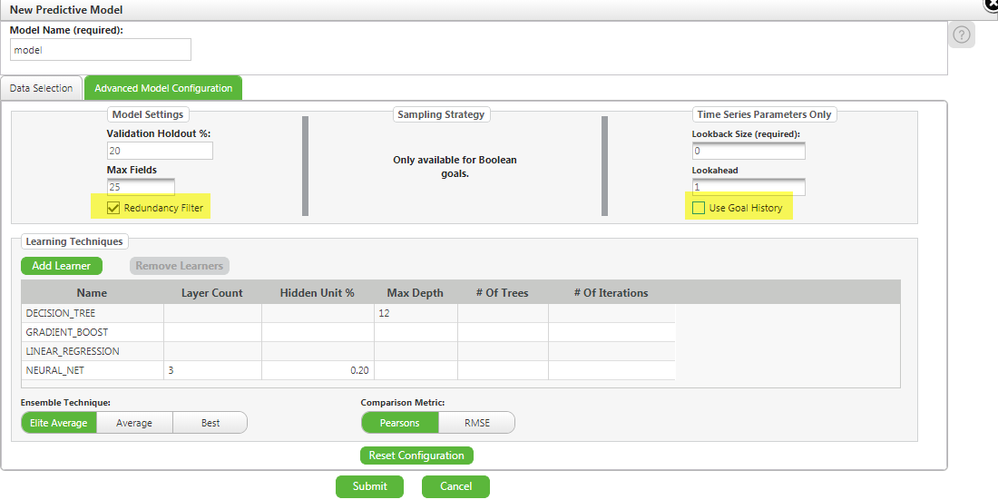 In the case of the NASA dataset, since we are using an ordinal goal, we need to execute it through API.
This can be done through mashup and services (see How to work with ordinal and categorical data in ThingWorx Analytics ? for an example) for a more productive way.
As a test the TrainingThing.CreateJob service can be called from the Composer directly, as shown below: 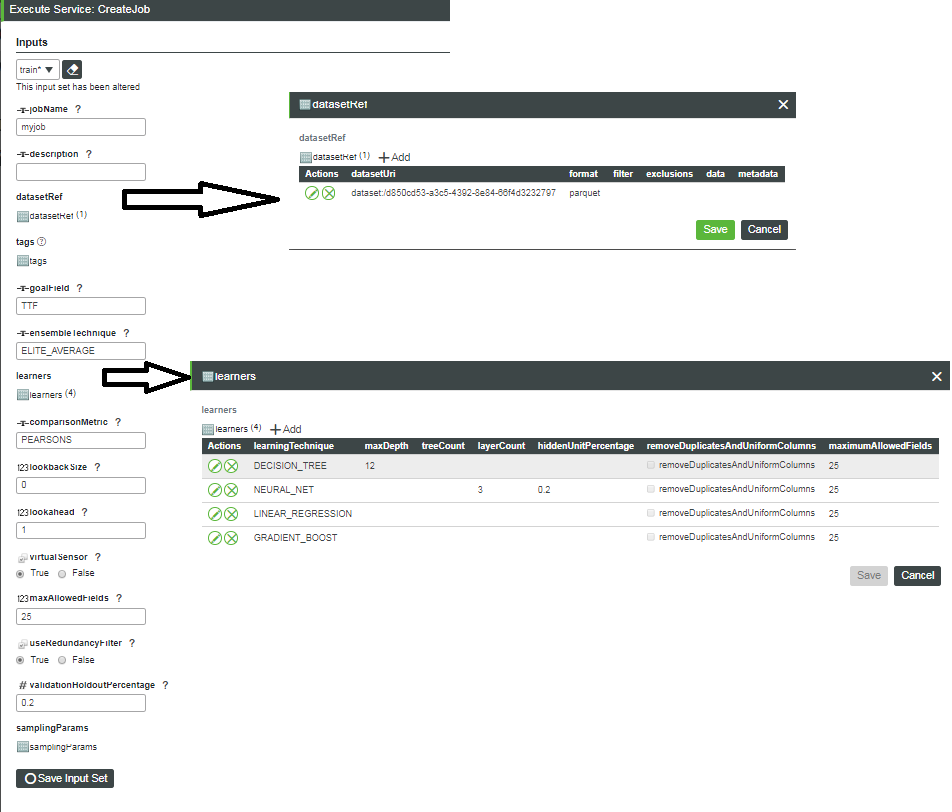 Here is the confusion matrix I get

Another validation is to compute some PVA (Predicted Vs Actual) results for some validation data.
ThingWorx Analytics does validation automatically when using ThingWorx Analytics Builder and present some useful performance metrics and graph. In the case of ordinal goal, we can still get this automatic validation run (hence the above confusion matrix), but no PVA graph or data is available. This can be done manually if some data are kept aside and not passed to the training microservice. Once the model is completed, we can then score (using PredictionThing.RealTimeScore or BatchScore for ordinal goal, or Builder UI for other goal) this validation dataset and compare the prediction result with the actual value.
here is one example:

Depending on the business case this model can be deemed acceptable or may need rework, such as change the range values, change learners’ parameters, modify dataset …

There is certainly a fair amount of experimentation before creating the optimal model but hopefully this post does give some good starting points.

Could you please help me to understand, how to create the graph shown below  (predicted vs actual for ordinal goals). I could not find suitable service to draw it. I see RetrieveResult from PredictionThing gives predicted values in infotable, but could not find any service for actual values in info table to compare with.

The PVA can be retrieved using the RetrievePVAs service of the ValidationThing. However this does not support categorical or ordinal goal, so if you are using a goal of this type there is no direct way.

- then compare the predicted value (result of the scoring job) with the actual value from the original validation set.

- the graph was simply created in Excel with the 2 series as input.

I was trying to run your example within TWA 8.5.4 and expecting this issue:

There is no "code" field in dataset though. If something got changed so much with 8.5.4 that prevents to run this example?

I have just run a test in 8.5.4 but did not get any error, I was able to upload the dataset and build the model.

The only thing that was not working was the goalField, it should be TTFord and not TTF as on the picture, but apart from that the model ran without issue.
Can you clarify when exactly you get the error ?
Assuming this is during model creation, how do you build the model, do you use a mashup /service or do you use the CreateJob of TrainingThing manually ?
Can you download th eTWALogCollector form https://www.ptc.com/en/support/article/CS316782 and upload the resulting gz or zip file created.

I run it using direct service invocation from composer.

I will check things from your mail and get back to thread.

Seems like using screenshot as an example I have mistakenly set removeDuplicateAndUniformColumns=true.

Is there a kind of common ways to display confusionMatrix result in a specialized widget? Bubble chart or what should be used to handle ordinal goals?

PS. I suppose there should be 4 ROC matrixes similar to used for boolean goals? This is what I can get now. Not similar to your output. And maybe you could help me to understand of how to explain summary on last screenshot?

And as I see the core of this example is a data transformation  - the way you get single dataset file from many original data files.

Good to hear it works for you now.
The very last screenshot is about the pva comparison, this is something I did manually in Excel, see my answer to Tushar dated 01-07-2019 04:49 AM above.
If you were more referring to the confusion matrix, the output you get is indeed the expected output from the service. You would need to write a custom service to format all in one matrix, this is what I did at the time but I don't seem to have that service anymore.

This is a very informative blog for me. I am very much benefited after reading this blog. Keep sharing.

Could you please explain me what difference makes the ID? I undestand that if I use only the lines for the ID 1 for example I will have the same results since each ID should have a different model.

I could not understand the relation with the ID and results.

I assume you are talking about the field AssetID with the opType ENTITY_ID.

In the case of TTF prediction, each different ENTITY_ID will represent a different occurrence of the failure - it could be happening on different asset or always on the same asset.
The more occurrence you have the more likely the model created will be accurate .

For example you could simulate a TTF prediction for a light bulb.

You will assign a  different ENTITY_ID for each test run.

So each ENTITY_ID will represent a different test run where the light bulb started from new till failure.

As indicated above the more test run you do the more accurate the prediction model is likely to be because it will have more data to learn the behaviour of the light bulb.