I had a v13.1 installation on my laptop. Worked fine for a couple of years, no problems at all. For a reason I can't seem to pinpoint, it just stopped working. If I double click on a Mathcad file, I get a Windows (XP) "file not found" error. If I click on the start menu shortcut for Mathcad, nothing happens. If I double click on mathcad.exe or mcad.exe in the installation folder, nothing happens.

I tried a repair, but that didn't solve the problem. So, I performed a complete uninstall removed everything mathcad/mathsoft/mcad from the registry, rebooted, and then tried a new installation of v13.0 (antivirus and Windows Defender turned off). Still have the same problem.

By coincidence, I've got a similar problem. I'm getting the Visual C++ library 'runtime error' (eg, http://collab.mathsoft.com/read?111791,99 ). It's taken out M12, M13 and M14. The applications were all running fine, with no subsequent installations or repairs, earlier on in the week (so all the pre-requisites were there).

However, I note that Windows has done 2 updates and I installed the update to Norton 360 a couple of days ago.

I've tried the usual Repair route on all of them and a few of the other suggestions. Before I consider re-installing them (a major PITA), I was wondering if anyone had any ideas what could be common to all 3 versions? (M11 and M7 seem to be OK).

6-Contributor
(To:StuartBruff)
All mine works fine (v11.1, v13.1 and v14.011M) and my Windows is updated. On the other hand I avoid any Norton stuff, so I can't tell if there is something there.

Here are some other suggestions from technical support database:

Resolution1: Ensure that the default printer is available prior to launching Mathcad.

Cause2: Mathcad looks for a license server that is no longer used to issue licenses

Resolution2: Check the registry for details of where Mathcad is looking for the license server. The server details are stored in

Under the FLEXlm key, on the right-hand-side, check that the server (or servers) listed is available and remove any that are no longer in use.

Cause3: It is possible (although unsupported) to set registry entries to look for handbooks and templates too (see Networked Handbooks and Templates (unsupported) for more information).

Resolution3: Ensure that the network locations specified in the registry are accessible prior to launching Mathcad.

Make sure that you are not being blocked by "spyware" and AntiViruses software.

1-Newbie
(To:mzeftel)
Any luck resolving this issue? I had a 13.0 installation that worked fine up until about a week and a half ago. There were some windows and Lenovo updates installed, and since then, I get the following message whenever I try to open any handbook or mathcad document:
"Windows cannot find 'C:\...path to document I'm trying to open'. Make sure you typed the name correctly, and then try again. To search for a file, click the Start button, and then click Search."

If I try to start the executable either directly from the program files directory or from the start menu, it does nothing (or runs & terminates with no message). I have tried uninstalling and reinstalling the program with no joy. I did not uninstall all the handbooks or muck about with the registry. I did try installing the 13.1 upgrade but it would not complete, saying it couldn't find something with the existing installation. I am in the middle of generating some design info and it has shut me down.

1-Newbie
(To:MoeSzyslak)
I just ran into this problem as well. Last used it on this PC two months ago, and it was working fine. Now, nothing, and no error messages (unless I click directly on a M13 file, and then I also get the "file not found" error).

Something changed in Windows and it really messed this up.

1-Newbie
(To:ptc-1448485)
If that is the case there might be one of two things you can do about it (assuming you don't have a full backup system in place that can restore your system to a known point in time):


1) Go to Automatic Updates section in control panel and make sure that updates don't install automatically - only notify.

Then go to your Add/Remove Programs secion in control panel. From there you should be able to find a listing of all Hotfixes and Patches that have been applied to your system. Record them and then remove them one-by-one starting at the most recent. Test mathcad each time (maybe even re-boot every couple of patches you remove). You will find the hotfix/patch that did the damage and will know not to let it install again.

If you do find that one was the problem - let us know.

2) See if you can do a registry restore to the last time you knew it worked. Google that if you need to. If you don't have luck - or the ability to restore to then try this AFTER backing up your registry (messing around in the registry can cause big problems if you are not careful):

Then re-install Matchad - and I would suggest installing to a new location.

That should be as close to a "fresh" install as you can do on an existing system.

1-Newbie
(To:PhilipLeitch)
It might also have to do with the activation server at PTC.

I periodically have trouble where mathcad 13 won't launch. One thing to check in windows xp:

Type services.msc into the run box.

Scroll down to the service C-DillaCdaC11Ba and make sure it is started. If it is not running, start it up. Some malware search programs turn it off apparently, and mathcad 13 does not like that. 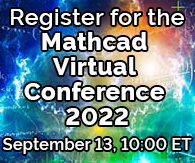