Layer rules are messed up and inconsistent

Layer rules are messed up and inconsistent

This is a cry for help (read: rant) regarding layer rules. I have been trying for days now to get them to work but they seem extremely bugged and inconsistent to me. Some rules don't seem to work at all.

Let me show you an example:

I also have a layer 03_DEF_AXES for default datum axes, including them by name. I have another layer 06_AXES for all other datum axes, excluding the default datum axes by name. This one just ignores the naming rules and puts the A_X, A_Y and A_Z axes from the external inheritance on the 06_AXES layer. Note that these axes are NOT on this layer in the inherited part.

What is going on here?

Layer rules also do not apply at all to items from external data on layers with the same name. In my examples datums from the external inheritance are placed on layers where I have excluded them by rules.

By now this has gotten me quite frustrated an annoyed. As expected, there is no decent explanation/help on layer rules to be found in PTC documentation. So I'm left to trial and error whatever ideas I come up with and try getting help here.

If anyone can explain the issues above please let me know. Help is greatly appreciated!

Not exactly, that's why I'm wondering what is being searched by on your 01 and 04 layers. Here is an example of what I'm referring to and see if they make sense to you. I'll include how I interpret what I'm seeing. 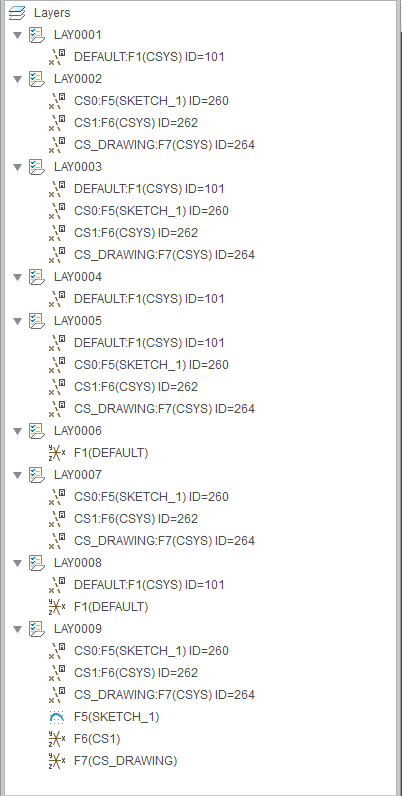 and what ends up on them.

got similar layers structure. You are using "AND" condition for default planes and it´s the core problem (in my opinion). Try to use "OR" instead of this. See following pictures from mine solid_start_part.prt. Plane names are different, but logic should be the same... In general: 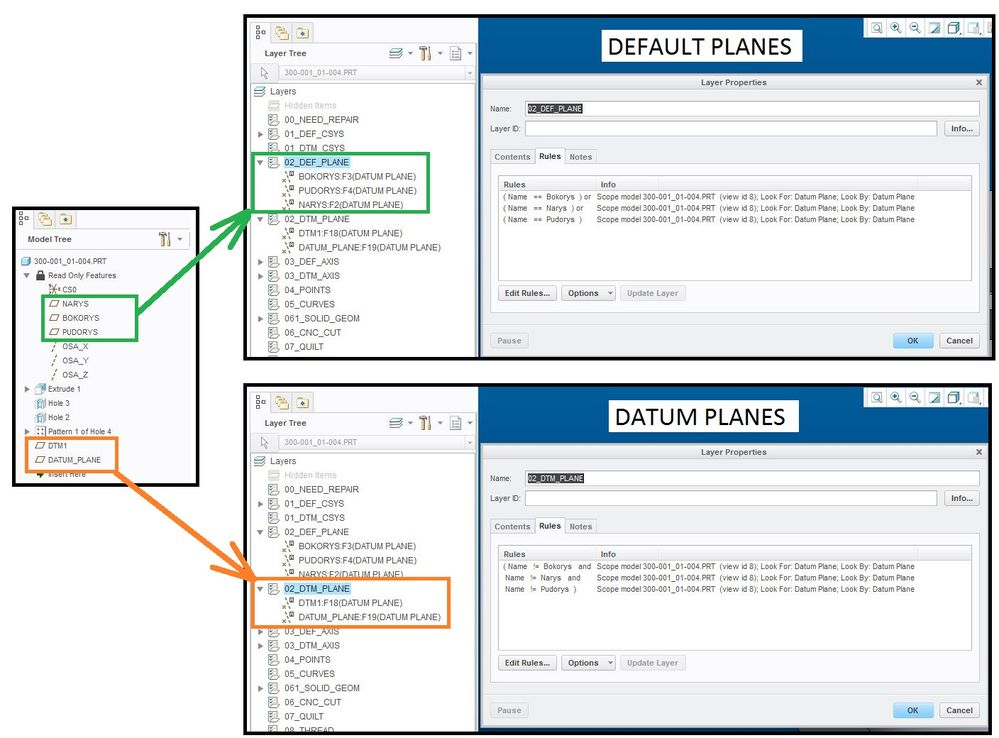 Thank you for your reply. Your rules seem to be setup in the exaxct same way as mine (same logic). See the attached example pictures: 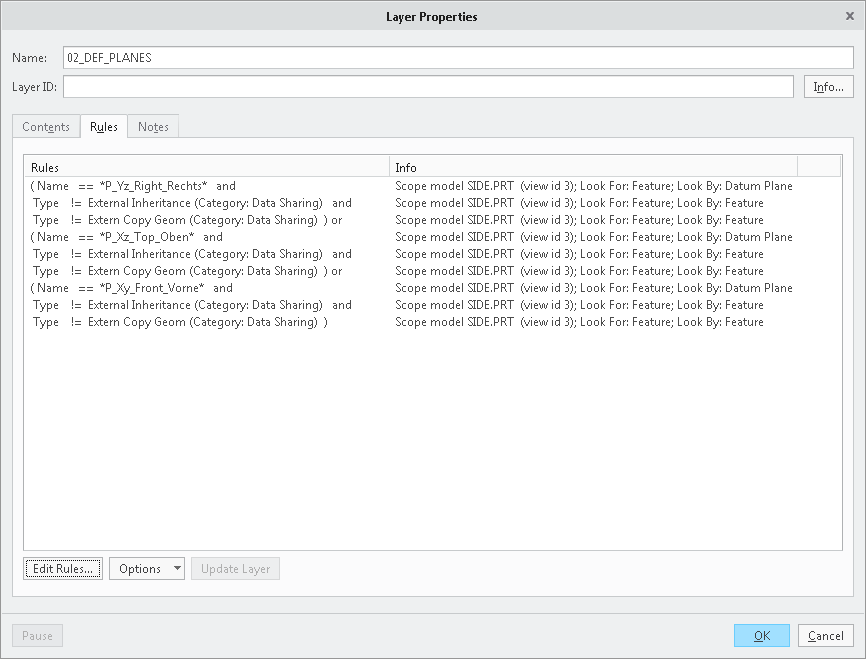 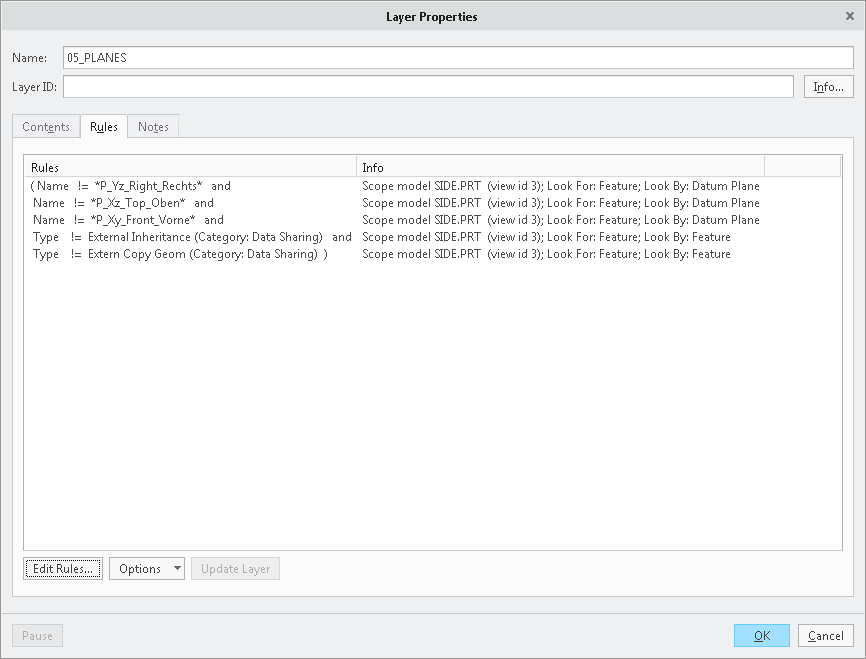 Thank you again for trying to help. Unfortunately the issues I have are not related to the feature names but to the way the rules work (or don't work) in general. The video tutorial filters only by name, which is not what I'm trying to achieve.

I'm still trying to a decent set of rules working for my layer setup, but refuse to give up jet yet 🙂

So what the rule should be? Pick items based on what (name, ID, type...)? Shortly please

Sometimes it helps when you take a view from above...

l think in generall there can be 2 basic ways to sort items in layers:

1) Pick this, this and this based on this rule

2) Pick everything and EXCLUDE this, this and this based on this rule

I agree there is no best way, it depends on the situation which way is better (more robust) to achieve what you want.

The first 3 images show the exact same rules as the last 3 images. Only the order is changed and the and/or statements are changed to match the order. These should give the exact same result but the preview shows the don't. Am I missing something or is it a bug?

I would think the results should be the same, but I'm no logic expert in this area.

"The only thing it will give you is the ability to hide the CS entity and show the rest of the sketch feature."
You're right about that. I was thinking about using e.g. isolate and saved statuses, but you've made me realise that it is not a good way. I'll stick to just putting CS features on the layer.

I f you compare each of the 3 rules side by side you can see that both rule sets are identical. At least in my opinion. The difference is only the order: (A and B) or (C) vs. (C) or (A and B).

It would also be helpful to see what the rule dialogs are for your 01 and 04 layers. What I'm referring to is when you look for a coordinate system and look by coordinate system you get different results than if you look for a feature and look by coordinate system. So it's not just the rules you need to look at but you need to look at what you are looking for and looking by. The results will be different depending on the combinations chosen. There might be a conflict there that is giving you something different than you're expecting.

The rule dialogs are in the screenshots to show exactly what you described. The results don't make sense to me.

Not exactly, that's why I'm wondering what is being searched by on your 01 and 04 layers. Here is an example of what I'm referring to and see if they make sense to you. I'll include how I interpret what I'm seeing.

and what ends up on them.

Thank you for your elaborate answer. I'll look into it as soon I have some time and get back to you!

Thank you very much for your elaborate answer! It really helped me understand the rules better

I din't know that when referencing (items on) other layers Creo also takes into account the rules by which an item has been placed on a referenced layer, not just the fact that the item exists on a layer (ignoring by which rule it got on that layer).

I find this very confusing and it makes understanding layers more difficult, but I think it might just widen the possibilities to precisely define what is placed on a layer.

Why doesn't PTC provide decent documentation to their software? Maybe they don't understand it themselves ;-)?

Thank you very much for helping out! I'll get to work with this new understanding...

Rescpect for you @Kevin if  you found correct solution.

I've noticed that as well.  I made a "curve" layer with rules to exclude 2 curves of a specific name.  It will NOt filter those out no matter what I do.  I have to manually "exclude" them.  PITA, but, it's only those 2.  The "rules", while they usually work great, DO seem glitchy in some instances.....like a lot of features....  😉

Ok, I might have found a fix for some of this glitchy behavior.  First I did a "Remove" of all the rules on the "CURVE" layer.  Then I created and correctly named the features I wanted to exclude ("!= to") by "Feature, Name" BEFORE re-creating the layer rules.  This way, you are able to pick the feature names to exclude from the drop-down, instead of typing them in.  I think it lulls you into thinking that since you typed it in, it recognizes it even if the feature doesn't exist, but somehow it just doesn't, leading to massive frustration and extensive use of the Pro/FANITY module.....  Then, after the layer rules are established and you've checked that they work, you can delete the features.  I did this to all my start parts, and now, whenever I make a curve it goes on my "CURVE" layer, but as soon as I name it "PART_MARKING_CURVE" and then AFTER a regen it goes from the "CURVE" layer to the "PART_MARKING_CURVE" layer.  So, now, it works for all my new part.  Yay me!

In a nutshell, it SEEMS like the feature must exist by the name you want to exclude prior to creating the layer rules.  Glitchy, but I finally got it to work like it should.  Good thing, because it was really p!$$ing me off, because I KNEW it should work as ruled.

Hopefully creo 4 will have fixed some of these glitches instead of just moving the commands around so we can't find them anymore....

9-Granite
(To:Patriot_1776)
That's one hell of a complicated workaround... I wish PTC would test their software a lot better before releasing it. I do appreciate the Pro/FANITY extension, since it comes for free with any other license and always works 😉
1 Kudo
Reply
Notify Moderator

Imagine what would happen if PTC startet renaming their modules and functions, e.g.