TOP DOWN BEST PRACTICES AND HELP ON SPECIFIC ISSUE

TOP DOWN BEST PRACTICES AND HELP ON SPECIFIC ISSUE

I am trying to adopt top down design for my work, but I am facing some issues with the coding (naming) of the parts and assemblies and with the management of the dependencies between the skeletons and parts. In the following I present a simplified (few parts and assemblies) version of a problem that we experienced while trying to adopt top down design for the first time. 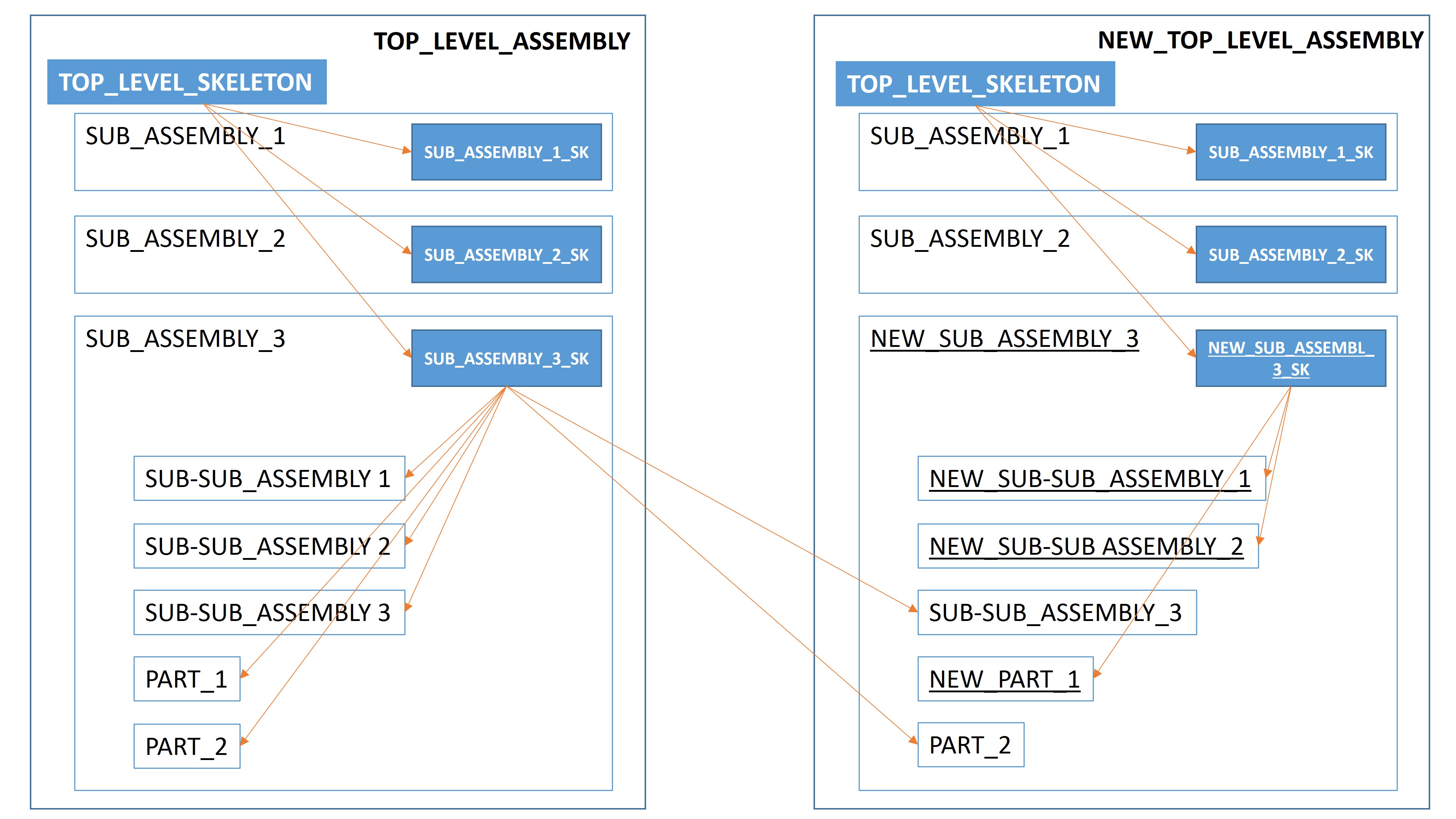 During the design of our system, at a certain point, we wanted to improve the SUB_ASSEMBLY_3 and this improvement was radical (enough) to require a complete new sub_assembly. But at the same time there were few parts and sub-sub_assemblies that could have been re-used from the old sub_assembly (this means that we used the same files, not a copy of the old files).

In the following, the modified or new assemblies and parts will be named with the "NEW_" prefix (so are different files from the old ones).

Here is what we did:

As you can see from the picture, the problem that we are now facing is that some elements (parts and assemblies) of the NEW_TOP_LEVEL_ASSEMBLY depend from the old TOP_LEVEL_ASSEMBLY. Obviously we did a mistake, but the lack of time and the complexity of the sub-sub_assemblies and parts guided our decision to re-use the old elements.

- how would you have managed the improvement of the SUB_ASSEMBLY_3? Is it correct to create a new top-level_assembly? Please consider that we should always have a complete assembly of our system ready for production, and that we can not produce something that has not been tested at least once.

- can you suggest me a good guide/book to learn top-down design? So far I only found some internet videos and articles.

- how do you define how many nested skeleton there should be? Theoretically we could have a skeleton in each sub-...-sub assembly.

- which information are usually stored in the skeletons?

- considering the issue with the naming convention (keep the same name for parts and assembly re-used) do you have some suggestion to improve the coding of the files? Can you suggest me a book or guide? I would like to understand how large assemblies are managed, like for example in car industry.

I heard that probably a PLM like windchill could solve some of my issues, but for the moment in my company we don't want to buy it because we are a small group. However, I am interested in knowing how a PLM could solve my problems.