I'm running Arbortext 6 with a custom directory which contains an Init.js in the ../custom/init directory. This JScript uses Acl.execute to execute ACL commands during the Arbortext Editor initialization. Now with the previous version it worked just fine, but since I updated to Arbortext 6, the Acl object doesn't seem to be resolved in the JScript anymore. I receive script errors now and thus y custom Arbortext won't load properly.

Does anyone have an idea what the problem could be or where I might look? I spent quite some time already tracking down the issue and am pretty certain that the Acl object not being resolved is the problem.

Thanks for your help!

This is the error message I get when starting Arbortext Editor with my custom Init.js script. 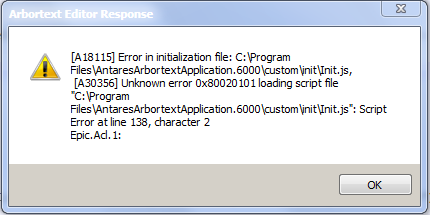 The line that causes this error is the first Acl access in the script:

It's the same error with any other function call on the Acl object.