I just started again working with Creo 2.0 a couple months ago. I used Pro_E back when it was DOS based. I have used Solidworks and Inventor also. I am very disapointed that Creo has not changed that much since I used Pro_E . Seems like they keep adding things and not fixing the problems that need to be addressed. I was really blown away with the fact that Creo still does not count all the holes in a detail. Very sad.

I was really looking forward to using it again it was the best program out there when i used it long ago. it seems it is very far behind the others now.

Welcome to the forum, Scott.

I am a long time user as well and have also used many platforms. I know where you are coming from.

I never got past the basics of Pro|E back in the day because that is all I needed. It was still ANSI Y14.5 and the implementation was sufficient at the time other than the -always displayed- datum tags. This problem exists to this day! So when I say I feel your pain, I really do.

Being semi-retired has given me a lot of time to explore the rest of what Creo has to offer. Most of the functions have been there in one form or another, but working with it today makes it new to me. The sheetmetal module, although frustrating as it is, is useful. Mechanism is fun, along with Animation makes it useful. And now with Creo -finally- improving real time rendering... I am seriously looking forward to that when M010 comes out. I never before used surface feature either. A lot of new-to-me avenues there as well.

Hang in there and get your pace back to where it use to be. You might just find it to do what you need and then some. Also be sure to post your queries here so you can get answers or feel free to share your old tip and tricks, also known as "Pro|WorkArounds^tm" (trademark belonging to all PTC users).

One thing I can say about Creo over most other platforms... My old PTC Designer files still open in Creo. Now that's a feat!

I'll echo a bit of disappointment. My background is coming from 3ds Max, Creo being my first CAD software (just starting out too).

I have to say my biggest complaint so far is the complete lack of custom shortcuts. In Max, I've got shortcuts for almost all the tools I use, I rarely have to use GUI buttons. Also the rigamoro to set up a default working dir, and load to custom settings is quite silly.

I'd have to say that the inability to work in a true 3D space is a bit annoying, though I get the impression it is just the way CAD programs work. However, some things such as methods of placing datum planes/axis sometimes seem necessarily complicated and restricted. For example, If I want to make a Datum plane in between two edges oriented parallel/normal to specific world axis, I should be able to do that.

It's not all bad though. Once I started getting used to the completely different approach/thought process to modeling, I have to say, making complicated objects is a lot easier when you don't have to worry about mesh topology, poly count, ngons, ect.

Best thing of all? As a Mechanical Engineering student I don't have to pay for the educational version. Autodesk charges $100 for a 1 year educational licence... In reality it's not bad, but free is better, and every bit counts.

Peridot
(in response to Arod529)

If you really want to be wild with orientations, and you can manage them, ...using coordinate systems will help set up groups of features. You still need planer and axial references, but they can all be tied to a more independent CSYS from the default. If you know how to specify and manage the CSYS features, you have great control over feature group relations. 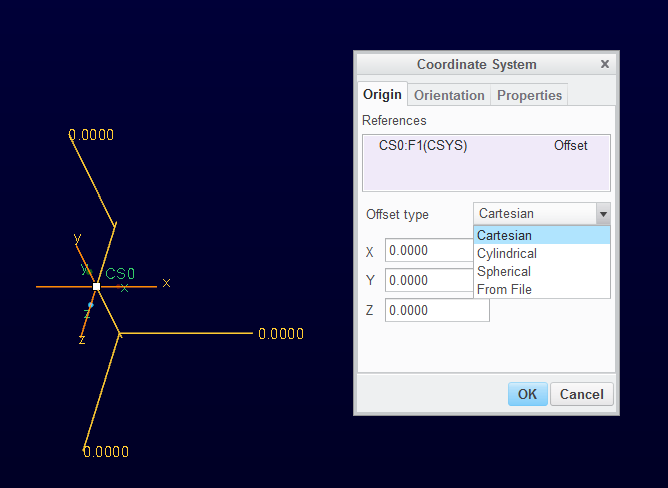 Arod, please clarify "true 3D space"? It is true that Creo has a predefined "origin", but that is more for it's own reference. I always start with empty parts and the first feature I place is the CSYS... the default coordinate system. The second click is planes to get the 3 default planes quickly. Now I have a 3D reference for everything else. If I want 0,0,0 to be a reference to somewhere else, I just create a second CSYS in relation to the 1st and never bother the original again (avoid references to it).

Newbie
(in response to TomD.inPDX)

Hm, let me try and clarify what I mean.

Yes, the world coordinates of a .part or .asm file are 3D Cartesian.

Ok, so lets do a case study. You create a new file, and have your CSYS and 3 feature planes. We currently have a 3D coordinate system for our part. Lets say the for the first step in creating a part we start a sketch on the FRONT plane. You are now restricted to drawing in the xy coordinates. You are working in 2 dimensions. Now lets extrude whatever shape was drawn, lets just say it was a circle. We may have a cylinder, but this time were working in 1 dimension, z. We may have a 3D object, defined as a whole by xyz, but at no point did we ever work in 3D. Lets say that now, for whatever reason, we want the rotate the cylinder by any amount. You cant. Using a various number of datum features, you can create a plane facing the intended direction, and then copy/paste the sketch and extrude to the new plane. Then you have to delete the original cylinder. All this, working in 2D or 1D.

Have you done any free form modeling? That is the same type of modeling I did in 3ds Max, only with much better tools than Creo for such. You have freedom of movement in all 3 dimensions. You work in 3D space.

I feel that working in 2d is very limiting. Perhaps there is a technical manufacturing reason? Want to rotate a sketch drawn on the xy plane 45* about the y axis? Why not? If the datum is really that important that it needs to be present, capable programmers could design Creo to generate the appropriate features. It is a matter of convenience and efficiency.

Peridot
(in response to Arod529)

Okay, that I understand. I have had no real experience in free-space modeling but Creo is not quite as limited as you paint it. Although 95% of my real modeling work can be done in a Cartesian environment, there are occasions where things like wiring and other limited occurrences I need to string something along a 3D path. I hope you are not surprised to learn that sweeps, blends , datum curves, intersects, boundary blends and a number of other features have full 3D capabilities in definition. And of course, you have the freeform feature and the warp feature for some less than analytical approach to modeling. Special features such as spinal and toroidal bends can also "curve" this Cartesian space you refer to.

Again, if I need to operate in a polar or spherical world, I can by defining a new coordinate system. I can act on all it's values and it becomes the master of a group of features. So if my requirement is polar, I can easily manage it using that method.

Don't overlook the advanced offset features either. Very much a surface feature that simply needs a planar reference to "sketch" on.

Now can I interact with Creo parametric in a way that I can think on my feet... develop a concept on the fly? Feel that the tool is interactive throughout my concept development phase without stifling me in the process? For that I have to say no way. I still rely on the paper pad and a pencil! But there are tools for that if you know how to use them. I don't happen to prefer them.

Newbie
(in response to Arod529)

That's the entire purpose of the both the warp or transform function. If you have an extruded surface it can can be manipulated in any axis, based on any coord sys/axis/dtm you care to create. Translate rotates or moves the exact geometry in any direction you specify, and warp does the same with the added function of being able to distort, taper, twist, bend on multiple axis any way you want. Proceed with caution as the warp functions tend to degrade with major changes as those specify an envelope of alteration. But in my case it is an extremely powerful tool to blend parametrics with free form capabilities. Have not had time to study the freestyle functions of Creo, but they should make the situation even better with the ability to manipulate surface control points. This functionality comes with the advanced surfacing module, and let me know if I can help in any way.

Newbie
(in response to Arod529)

Forgot to mention that a key element is to create the extrude or surface geometry and forget about the sketch. Warp or transform the resulting geometry to you liking... much more stable as long as you keep in mind the bend feature will need to be corrected for the envelope. The sweet part is that you don't break the parametric id chain so most child features will pick it up just fine.