I've found the option for show_total_unfold_seam to remove the central fold seam lines from an unfolded section view, but that doesn't seem to take the cake in the attached situation below where I need to cut through multiple bolts on different patterns. True to being creo, I get an athentic view over one I can actually use. I wasn't able to select and delete the line with edge display either.

Can this be remidied by drawing the connection in the section view's cutting sketch in a different way?

While I'm at it, due to the nature of our designs "shown out of position" comes up a lot in old drawings we have on file, and sometimes I've been asked to draw our models to such as a workaround. Is there any way to impliment this without creation of a secondary model or a having a misrepresentation of the primary model? Any favored workarounds or does being pulled from a 3d model make drawings too realistic? My company is used to working in AutoCAD and thus able to fudge views, and transitioning older works to Creo has been a bit of a pain when they want me to match views perfectly on the recreated drawings unless I've been missing some option hidden here.

1) Shown out of position: This is a basic drafting philosophy problem. Should a drawing show the relative positioning to clarify the relation between items or show the actual positioning at the risk of loss of clarity? In extension, is it OK for different views of the same features to show those features in different locations or sizes, or even be present or removed, when all the views are supposedly of the exact same object?

The benefit to 3D computer models was to avoid having various hand-created 2D projections of what was in someone's head get out of synch and represent a part that could not be created. In 2D one could have a three view drawing of a sphere and it be a different size and shape in each view.

If you wish to create illustrative items, I'd recommend creating assemblies that are specific to the drawing, adding parts to those assemblies, and using the flexible assembly feature to alter the models to suit. This avoids confusion between the part model, which remains unchanged, and the drawing-related assembly. Be aware that the drawing related assembly will not report the original values for flexibly altered features or dimensions.

2) Offset section: I would, given the above drawing, not have used an offset section. It is confusing and there is no added information over either two separate sections or just one through the two top holes of each pattern that are radially displaced from the center of the part. As it is the two horizontal lines are what anchors the relative positions of the holes to the path of the cut, so removing them looks to remove critical, though unappreciated, information.

1) That's what I was thinking, but is something that never came up in training. The company wishes for perfect drawings first, but reusable and revisable models that will make sense in a few years as well. Many of our products return for servicing on a five year rotation making for constantly changing drawing systems a bit of a pain even before I was tasked to re-standardize everything from 2D to 3D. Some views are just possitioning/clarity views, but overall the drawing package is directly used for fabrication.

I'll have to look into flexible assemblies, I don't recall ever using one before or knowing much about them actually.

2) Very vague example there, I’m not sure how much I’m allowed to show outside since our designs often fit into bigger projects we don't even get to see internals of. Essentially though, we run into concentric bolt patterns a lot, often on multiple layers around a cylindrical part and typically are placed to not line up via angular rotation around the cylinder. The view itself is dictated by other features that we wish to bisect at the center of the cylinder, and then a slight jaunt off to run through the bolt ring. Rather than awkwardly clipping the bolts partially, previous drawings have always made that little step in the section view or had the bolts simply shown out of place.

I personally like it there because it means it's more accurate, but the fold creases cut through critical internal components to display both common layers of bolt rings when I really just want a partial view on the outsides.

I’ll be looking to take more section views I guess, had to ask after trying to dig through drawing settings myself. I might just end up using off-plane local sections for bolt locations on the other section views, even if it looks odd to be missing an extra chunk here and there.

do you want to get rid of the connecting segment and show only one seam instead of the marked segment, limited by two seams?

In that case use an arc (concentric with the unfold axis) to connect the section planes.

If you want to get rid of all seams, show_total_unfold_seam no should do that, but you will have to use Review > Update Sheets to see the difference.

If you do both, it would look like this : 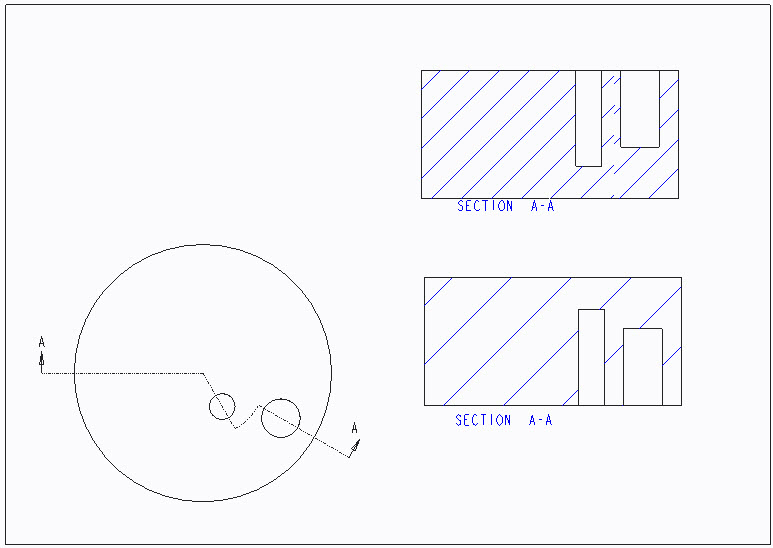 P.S. Don't mind the upper section view, as it is something that should not exist. It's an Unfold View created with a straight segment and then the section was modified to have an arc segment. The lower section view is an Aligned View, as is applicable for the section with the arc. You notice the difference in hatching.