I was trying to make this car jack, but when I tried to run the static analysis it gave me the error bonded surface. I am not sure what went wrong since I use the same part twice only one of them gave me the error. I have attached the pic and model. The red circle is the bonded interface 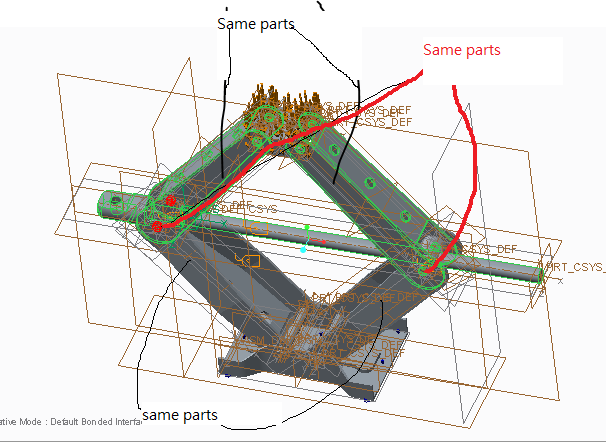 I don't have anything that opens RAR (I avoid them).

Q: What kind of contraint are you using on the hinge point?

I used axis coincidence aline with the center bar and used distance to fix a specific location on the bar.

What if you use a mechanism "pin" constraint?

Tried same thing happens. I read something about setting the tolerance to absolute to avoid this kind of problem do you happen to know how to do that ?

You have to enable absolute accuracy in config.pro and then you can set it in Manage Model

The models complains of outside references. There is also significant alignment problems as shown in the image: 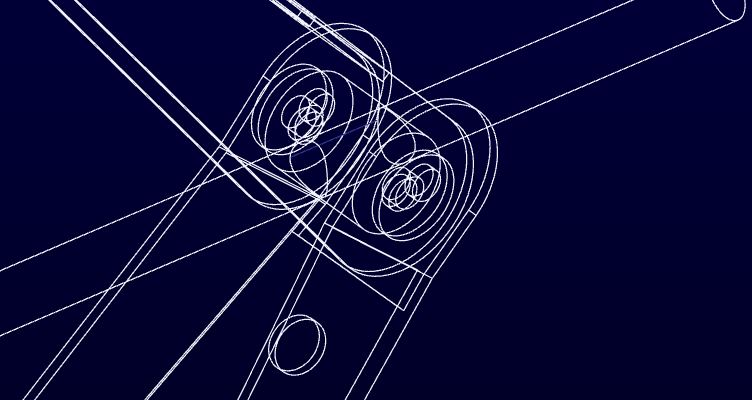 I suspect there are assembly problems and some sort of loop that is confusing the assembly. You might try building this at a single level assembly with all parts fully constrained. If the analysis does not require forces on the leadscrew, you might fix the middle hinges with a temporary part where the hinge pins and the leadscrews are all one part. This will still give you some feedback as the loads on the leadscrew.

I tried the single level assembly at first time and got an error saying not enough constrain while running the analysis. But I FIXED every part using the "fix" constrain. I did it again in the single level and got the same problem saying bonded interfaces.

I rebuilt the jack with mechanism. It is in Creo 2.0. See if it works better. You can drag the top base with Drag Component to set the position you want to do the analysis on. See attached.

All the files are renamed, so nothing should be overwritten.

I'm having a little fun with your model...

You can modify the constraint on the threaded rod to hold a Distance for the analysis. Otherwise it might simply collapse.

Thanks for you help. I am using creo 2.0 M030. I am not sure what went wrong but with your model, the autogem says can't create the elements. Without no specific info.

I tried mesh on selected the parts. It works fine by not meshing the upper and lower arm together. 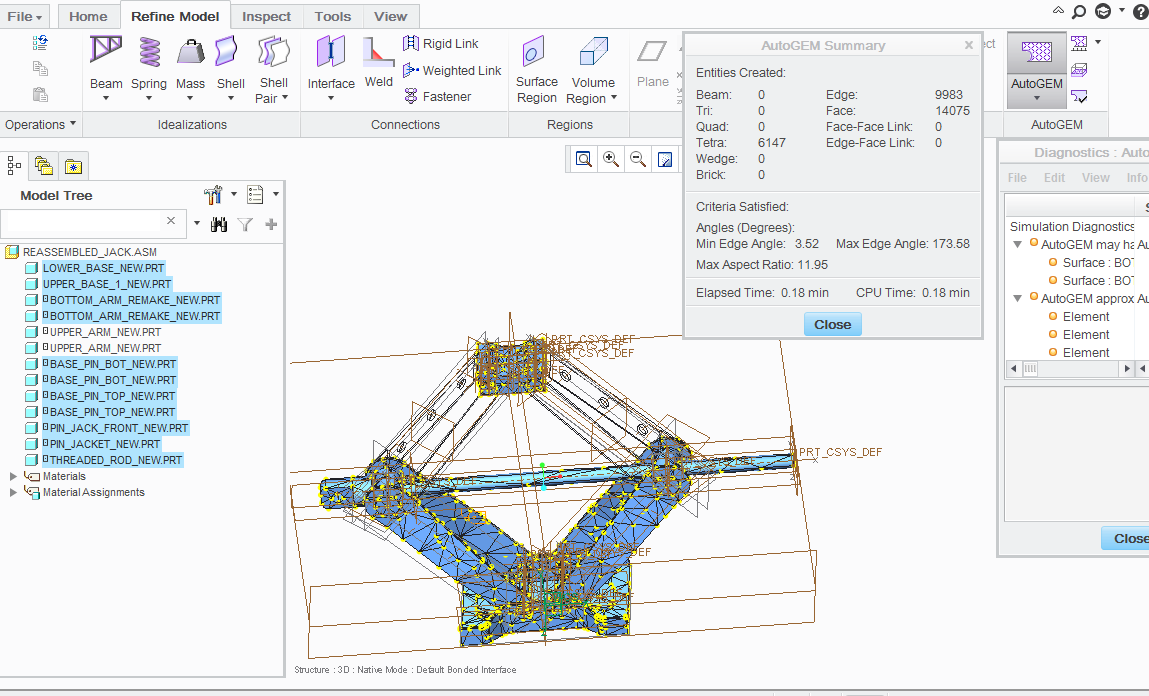 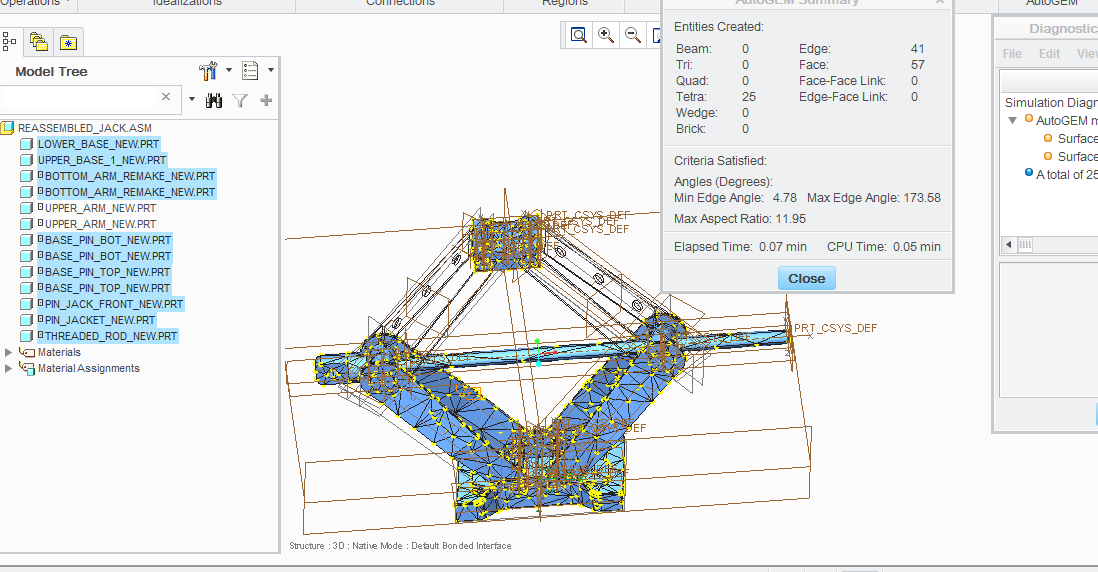 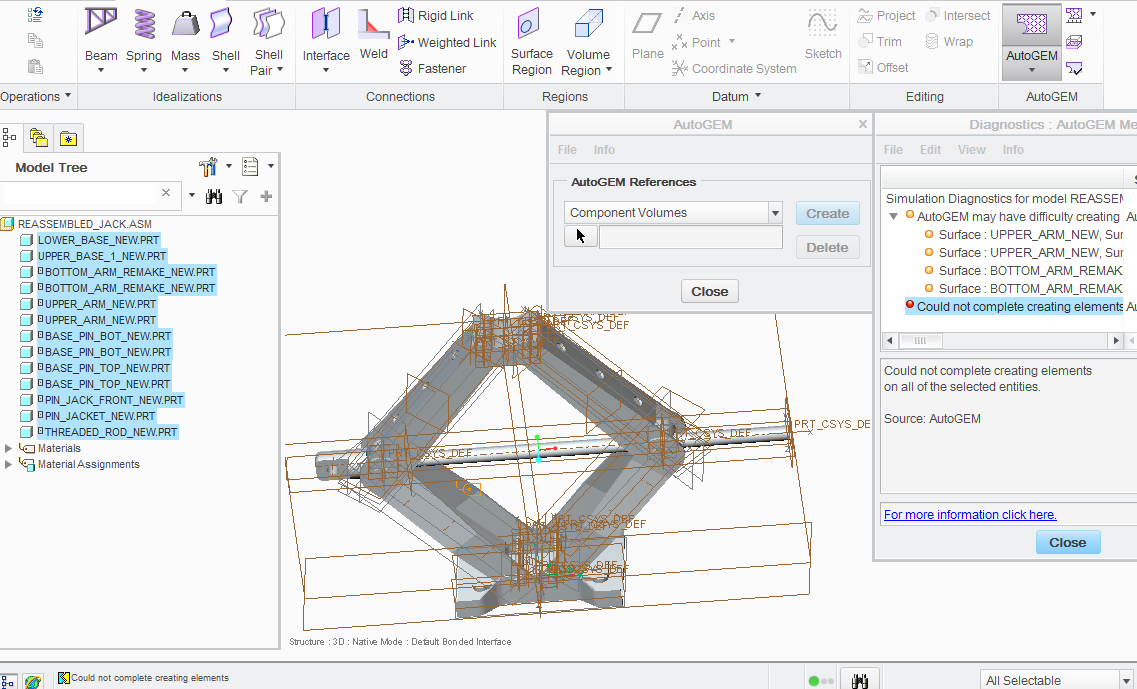 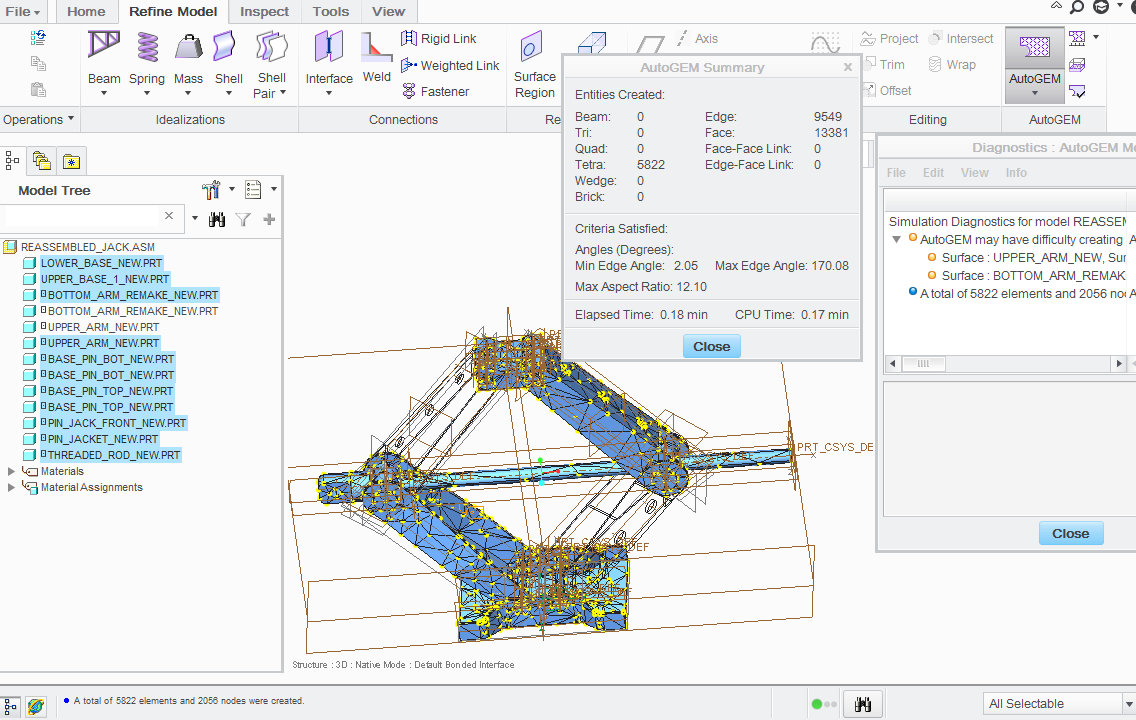 I don't have that module but thanks for sharing.

The upper arms have two pin constraints. I wonder if that is causing the failure.

Tried to delete all the pin constrains and replace it with "fix“ constrains, but nothing useful came up

I don't know what else to tell you. Hopefully someone with more knowledge than I will shime in soon. You could try opening a case with PTC too.

Thanks for the help, I will try to set up a meeting with our company's machine shop guy on Monday and see what happens.