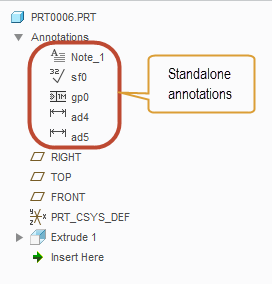 Annotation elements, by contrast, are owned by another feature in the model. Typically this feature is an annotation feature, but it can also be general modeling feature (such as Extrude or Hole). 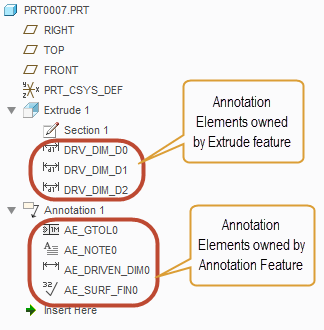 For companies moving to Model-Based Definition, these advanced capabilities make annotation elements within annotation features the preferred choice in Creo 3.0 and earlier.

Enhancements to standalone annotations in Creo 4.0

In Creo 4.0 we have enhanced the standalone annotations for GTOL, Datum Feature Symbol, Datum Target and Dimension to include most of the same advanced capabilities that were previously only available for annotation elements inside annotation features. So, these types of annotations will now support:

The only capability not available to standalone annotations is the ability to support feature operations, which will still only be possible when annotation feature is used.

When to use standalone annotations or annotation features in Creo 4.0

Given that most of the advanced capabilities of annotation elements will be available with standalone annotations (for GTOL, Datum Feature Symbol, Datum Target and Dimension), there is less of a need to use annotation features in Creo 4.0. Here are some criteria that can help you decide which method to use.

Besides the three reasons above there generally aren't any other advantages to using annotation elements over the enhanced standalone annotations. Most importantly, you can capture the full semantic definition while using the enhanced standalone annotations and it is this ability to define fully semantic GD&T that many companies are considering the major benefit to a Model-Based Definition.

If you have any questions, please let me know in the comments below.

Moved this blog from Creo Sneak Peek group to the Model Based Enterprise group.

Also edited slightly to reflect the fact that Creo 4.0 is now shipping

As far as I know, the tools for generating NC toolpaths are based on the geometry of the model and they don't directly reference the dimensions in the model - whether created dimensions displayed as annotations in a combination state or the embedded feature dimensions that are visible while editing the parametric features. Said another way, the toolpath follows the contours of the geometry itself and doesn't rely on the dimension values to know where a surface is located relative to the origin. So, I think the short answer is that generation of NC toolpaths by the software should not be affected by the type of dimension used.

However, the chosen dimension scheme and the tolerances would, of course, influence how the manufacturer chooses to manufacture the part and also how the inspector would choose to inspect the part. What I'm referring to here is the choice of how to fixture the part, what tool to use, what type of toolpath to use, and other aspects of the process such as feeds, speeds, etc... All of this would be determined based on the requirements specified by the dimension scheme and tolerance values.

As to whether there could be a discrepancy (in terms of dimension scheme and tolerance values) between the underlying feature dimensions used to construct the part model and the created dimensions that are displayed as annotations in a combination state, the short answer is yes, there could be a discrepancy there. But, it is important to note that the only dimensions that matter in terms of communicating manufacturing and inspection requirements are the dimensions that are displayed as annotations in the combination state. This topic merits its own separate discussion to get more into the details, but what I've said here is the basic jist of it.

As for driving vs. driven: Yes the fact that you can, in Creo 3.0, add a semantic reference only within a Annotation Feature is limiting and thus the need for using a driven annotation. Your observation is spot on. Note that in Creo 4.0, users will be able add additional semantic references to driving dimensions. This should open up the use of driving dimensions more than driven by the end users developing the MBD, which is what was taught years ago in old drawing courses (use driving, don't create new). Most users want to just use an Standard Annotation and not go the extra step to add to an Annotation Feature to generate an Annotation Element.

A semi-MBD side topic is to consider manufacturing UDFs. These would allow the placement of common features with all of the manufacturing information needed for Creo NC. Depending on what type of models you manufacture, this may help minimize issues you see with deltas in dimensioning. There would be a need for someone to build Mfg UDF's, but if you keep having to build the same NC tool paths over and over, they may be beneficial.

If you have certain types of features that are used often it can be a big time-saver to build a UDF that includes the annotations to document that feature.

Raphael, thank you very much for your explanation. By the way I really love the improvements in Creo 4. 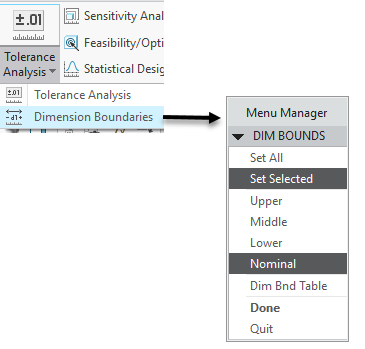 The dimensions that are taken into account (with assigned tolerances and fittings) are sketcher dimensions and other driving dimensions, not dimensioning done by 3D annotating. Thus if the 3D annotating dimension is a driven dimension that will cause a lot of work for the manufacturing people. So my question is how is this managed by PTC Creo in a MBE environment ?

OK, I understand now what you are referring to. The Dimension Boundaries command basically regenerates the model taking into account the plus-minus tolerances for the various driving parametric feature dimensions. So, if you create an extrude that is 10.5mm +/- 0.2mm and you measure the geometry in the model you would get exactly 10.5mm. If you then set the dimension bound for that dimension to "Upper" and regenerated the model and then measure the geometry you would get exactly 10.7mm. In this case, even the NC toolpath still follows the geometry of the model, you just have the ability to regenerate that geometry to something other than the nominal condition in which it was modeled.

As you noted, of course this can only work for the driving feature dimensions and will not take into account any created (driven) dimensions. So, if your models are built so that the manufacturer needs to apply the dimension boundary (upper, middle, lower) to some other condition for toolpath generation, then I guess there is no other choice but to use the driving dimensions and to avoid using driven dimensions. Unfortunately...

The disadvantage on driving dimension is, that they do not collect their references automatically. In case I create a sketch, and a feature out of it, it should be easy for PTC to identify the reference surfaces which are connected to the sketch. OK in CREO4 we can add those references, but this is manual work, and is slowing down the process of a design. In case we use Annotation features, we can add annotation elements into an annotation feature, but once they are inside a feature, it's not possible to get them out again. This is a big issue on Family Table Instances. An Annotation Feature should be as flexible as a group inside Creo. From my point of view another big disadvantage of MBD in CREO is, that we are not able to group a symbol to an annotation element or feature or driving dimension, like it is in 2D drawing mode. Downstream, we cannot analyze a driven dimension together with a symbol, which is mandatory for downstream machine readable interfaces.

Does anyone know if as Standalone annotations were enhanced for Notes, Symbols, & Surface Finish as Raphael predicted for Creo 5 or 6?  We are in the final stages of transferring to Creo 4 right now and am wondering what the future holds in respect to standalone annotations.

We've discovered that we need to develop some training around conversion of old style datums & the associated GTOL's for legacy drawings when they are revised. I'm leaning toward standalone annotations as the easier path to the new datums.

Can someone explain what a Driving Dimension Annotation Element is?  Can I create one in Creo 4?  Is it part of an annotation feature?