Need to discuss the following scenario,

User active as well as “(deleted)”:

On querying for users using wcadmin- the user say for example “psachin” is found active as follows: 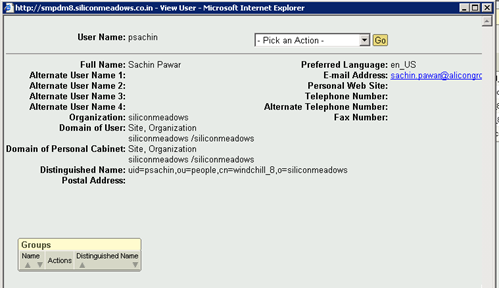 However the same user is displayed as “psachin(deleted)” as follows:

By the way….  this has been there before I started working in this role. Have now implemented the policy as recommended by PTC of not deleting a user and just changing their password and moving them to a group called “deactivated users”

But need to know HOW-

It is really odd that PTC uses the word "Delete" here.  I did a very similar methodical study a while back on this.

The action deletes from Windchill DS, but not from the Oracle (or SQL SVR) database - if the user has ever logged on.

I can't speak to Windchill 8, but in 9.1 there is a "switch" that can be enabled to allow deleted users to show up with (Deleted) after their names.  Once this is turned on they can be searched for using the advanced search page.

If you have a user listed two times (or more) and one of them has "(Deleted)" after their name, then at some point in the past that user was manually deleted from Windchill and then at later was either manually recreated or automatically recreated (possibly from Active Directory integration.)  Unfortunately there is no way to merge the separate profiles.

While an administrator can cancel a check out, there is no way for an administrator to check in work for a user unless they physically log in as that user.  Since this user has already been deleted, you would need to go into the database, unmark the user as deleted, create a new LDAP account, reconnect the (now disconnected user) to this new account, then log in as them.  Only then would you be able to check in anything they have checked out.

It's been a while since I've played around in an 8.0 system, but do you see these users show up if you go to Site  > Utilities > Personal Cabinet Administration? If these users are actually deleted, then deleting their personal cabinets should do an undo checkout on any checked out work.