Create a solid weld fillet between two round pipes

Create a solid weld fillet between two round pipes

I am trying to create a solid weld fillet between two round pipes, to be calculated in Creo Simulate, but I can't figure out how to.

I managed to create the outer surface with a boudary blend (green in the picture): 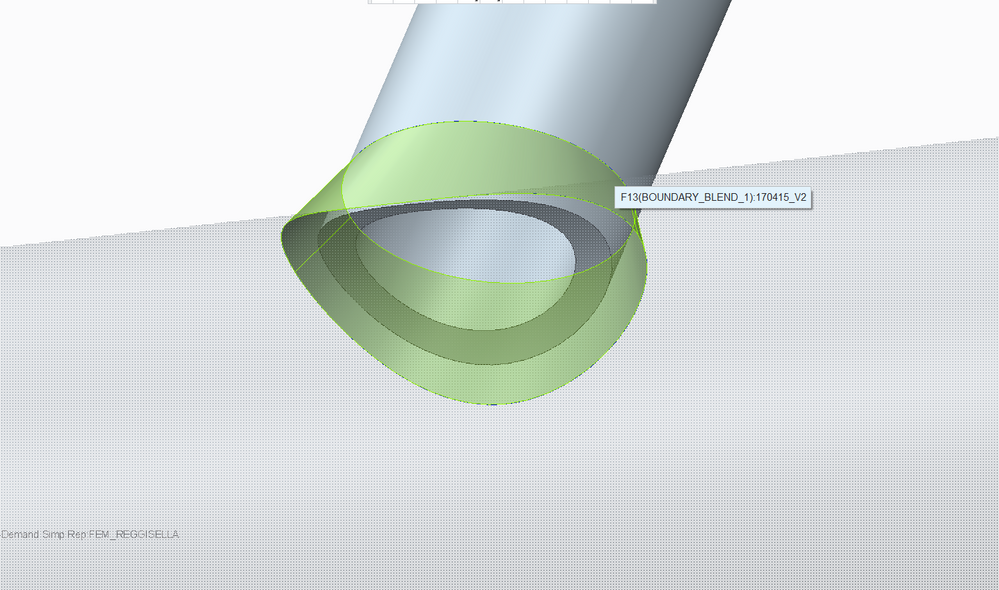 after that, what I need is to solidify the inner space between: green surface-vertical pipe (grey)-horizontal pipe (transparent).

Anyone has ideas/indications on this?

I found a way to it, for those who may be interested.

It's made by creating surfaces for the other borders of the solid fillet space, then merge all the boundary surfaces and finally solidify gets done.

I enclose a video showing the steps.

I found a way to it, for those who may be interested.

It's made by creating surfaces for the other borders of the solid fillet space, then merge all the boundary surfaces and finally solidify gets done.

I enclose a video showing the steps.

If you need a separate model for the weld material, you might try:

(1) Build a single model that intersects the two pipes. This will be a single body.

(2) Add a round to the intersection of the two pipes.

(3) Do two cuts down the axes of the pipes, effectively removing the pipes.

What's left is your weld all by itself. Bear in mind I haven't tried this, it's only my idea as to how I'd approach the problem.

For this kind of simulation you should not use the Welding Menu.

I think Ken was not refering to weld menu. It's quite a limit in my opinion, it has not been conceived to be used in fem simulations (even if there is the option of "weld feature" in fem weld menu), because the software models them as shells. It would be something much interesting to have some kind of 3d solid weld function for calculations, without having to build them manually.

yes in fact I thought the ideal would be to directly make a chamfer/round..but the problem is that it is an assembly (no adding material features, & no way to round an edge of a part with respect to another external one). The limit to merge components in one prt is the different fem materials between components: it would be ok just in single-material assemblies. And with just bonded interfaces between parts.

Anyway could turn useful and fast in some cases.

What we do is:

Thanks for your suggestion, it seems interesting too.

Which sweep profile do you use in that case, to be sure it always cover the weld volume? (if you have an example to attach would be great). 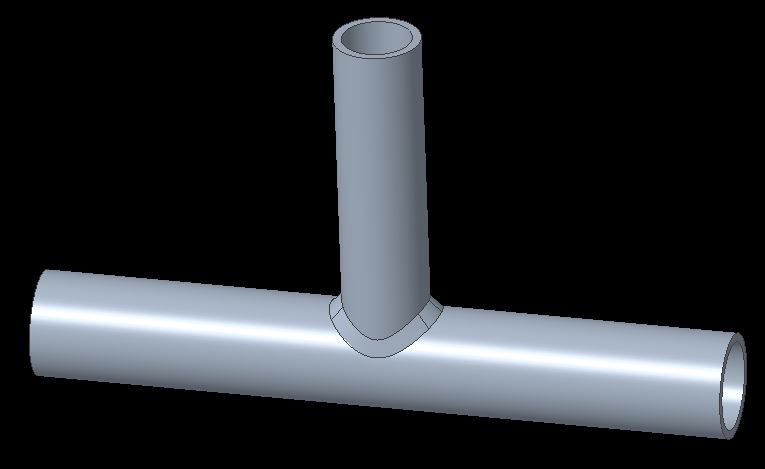 Instead of sweep i used projected curves and Boundary blend option. Its quick.

I have attached the Creo 2 M180 version.

thanks for your file, we are upgrading to 3.0 (hope as soon as possible), how is the 4.0? does it have bugs or things to be fixed?

Anyway, I took a look and fillet seems to be well shaped. Since we have the basic license, the copy geometry option is greyed out in our software. But I can easily do it (as did in my post) with a copy-paste of surfaces:

What are the differences between this copy-paste and your copy geometry?

Also, I found that I don't have to use the trims...just have to merge the two pipes surfaces and then this to the boundary blend and it works fine.

I am also trying to make a UDF out of it, if possible.

We are still on Creo 2 M180. But we will be moving to Creo 4 shortly and Iam working on the evaluation of this version. There are some known bugs that are getting fixed in the coming builds but as a whole 4.0 has much more options and flexible in using.

On the trim question, usually there will be a small gap between 2 weld parts and we follow a .02" gap. So to merge the two surfaces, i need to use the trim option and then merge.

Ok, so you are doing the double upgrading at once. I am curious about the 4th.

Concerning the trims I was refering to my trims in my solution post...with your example I saw that I can avoid making them, and join everything directly with merge->intersect option. Comfy!

I wasn't talking about making a round in the assembly, but creating a new part that only contains the solid geometry for the fillet. The full list of steps for this would be:

(1) Create a new part in the assembly.

(2) "Activate" that part, so any features you create are in it, not the assembly.

(3) Using the tubes you already have in the assembly, make two features that are solid cylinders along those tubes, intersecting each other as in the assembly.

(4) Add the round to the intersection of the two cylinders.

(5) Make two features identical to the original two, but use these to cut away the cylindrical bodies.

The result is the fillet as an isolated model. Assign it the correct material properties, etc. Hopefully this is what you were looking for, originally.

Yes I knew you didn't mention the round in the assembly, i was just reporting that as my initial "ideal" solution.

Anyway many thanks, that can be a possible solution too!

thanks for your message, could be interesting for someone. However, I was more searching for a way to draft the geometry of the weld, than the criteria/formulas for the calculations to perform.

How did you draft the welds?is it an assembly or a part?