While there have been a lot of improvements in the realtime rendering of appearances in Creo 3.0, some of the functionality has been completely broken.

Just talking about the generic appearance:

The general shader should give the most flexibility and control over how the appearance looks.  you should be able to achieve any, even non-realistic looks, with the general shader to give full artistic freedom (my concern is that a coder is somewhere thinking, "hey lets make these parameters work as they would in a physical lighting model" - this only makes sense once the shading model has achieved nearly perfect representation of real materials.  However one might argue that even still there is reason for using unrealistic shading models to represent the surfaces.

My biggest problem with the changes is that I do not care if the surface rendering is realistic.  I only care if I can read the surfaces, and diagnose surface imperfections.  The realtime rendering in Creo 2.0 was excellent for this purpose, and I was able to achieve a high level of surface legibility with the realtime rendering.  However since Creo 3.0 I have not been able to get the same quality due to the change in how highlight and reflection and ambient parameters have been chagned.

Hopefully this is just a bug - but if it is not, I REALLY hope someone from PTC - and my peers - care enough to make some noise and get this fixed.

I have noticed there are other appearance classes that have the same problem - that is sliders that have no effect on the appearance.  Perhaps it is just a bug.

here are a few images to show what I'm talking about. 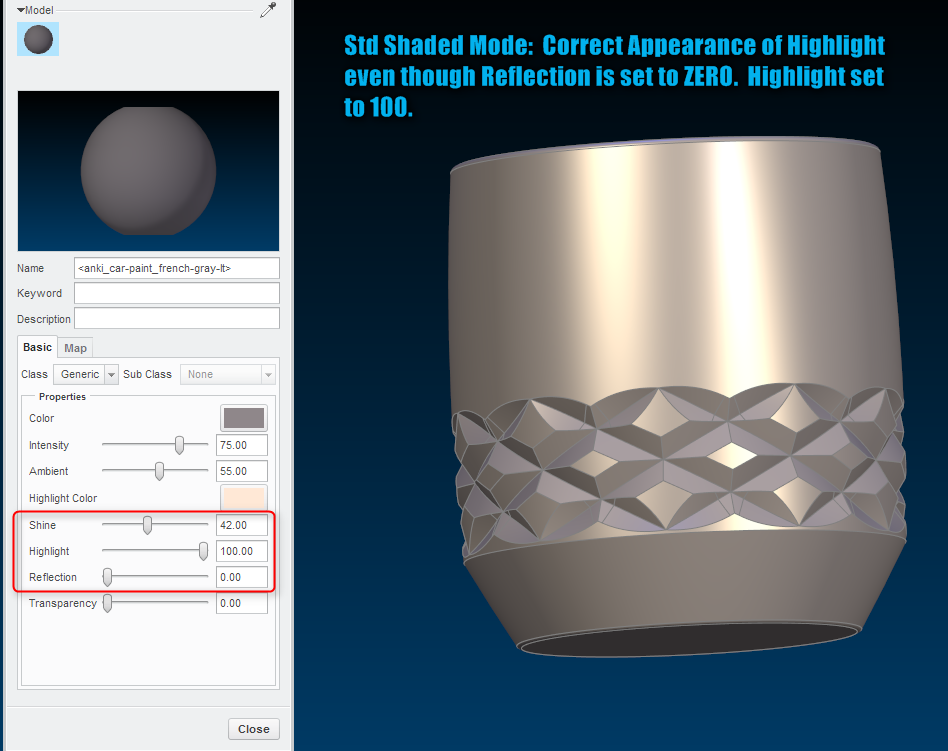 realtime render mode: the way this is set up the appearance should be IDENTICAL to standard shaded mode, because the non-photoreal lights would still create highlights, and reflection is set to zero so there shouldn't be a reflection anyway. 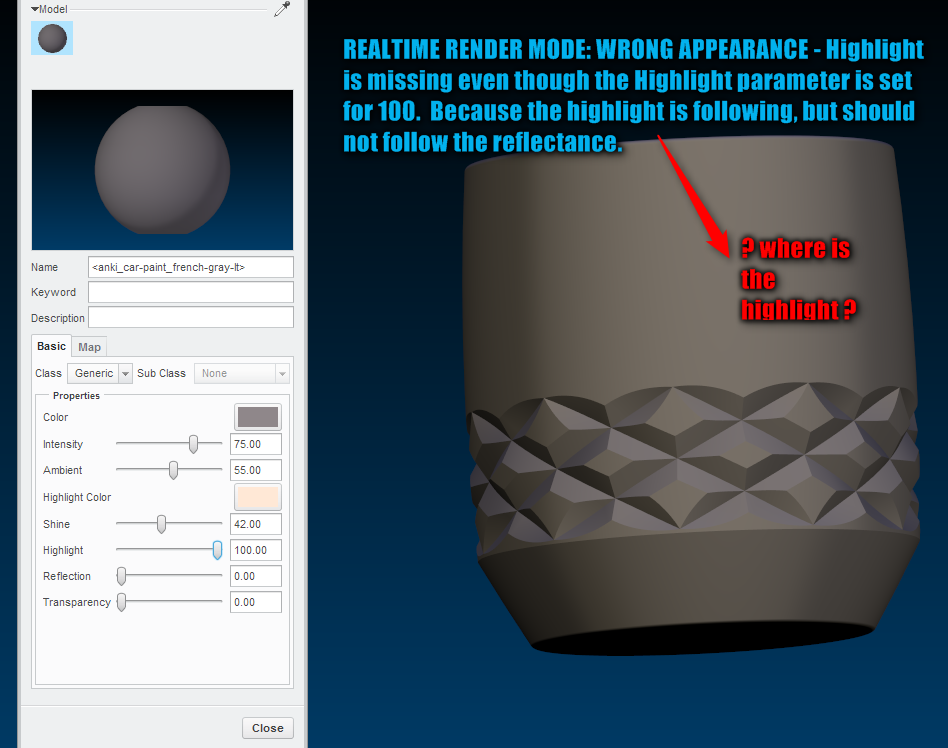 This is set up and would be correct if highlight was set to 100 and reflection to 100, but highlight is set to zero yet the highlight still shows up.  90% of my good surface reading shaders you a high level highlight, low shine, and very little or no reflection.  really hope this is a bug. 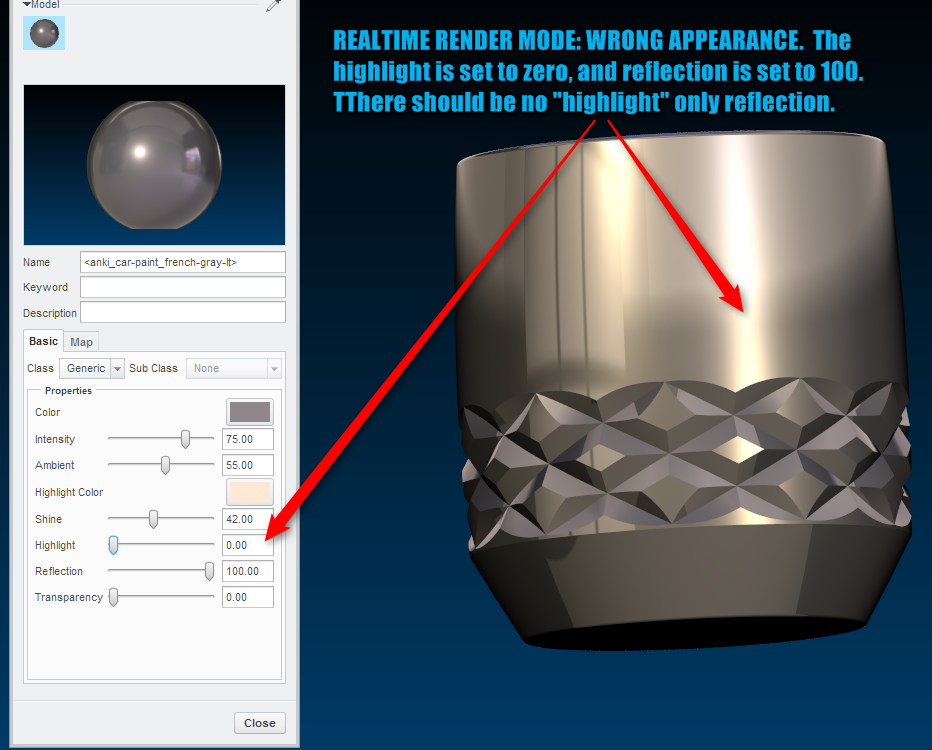 This thread is inactive and closed by the PTC Community Management Team. If you would like to provide a reply and re-open this thread, please notify the moderator and reference the thread. You may also use "Start a topic" button to ask a new question. Please be sure to include what version of the PTC product you are using so another community member knowledgeable about your version may be able to assist.
Labels:
1 Kudo
Reply
Notify Moderator
9 REPLIES 9

In case you are stuck with Creo Parametric 3.0 and can't go back to 2.0 try setting these config options:

James62 Would you mind elaborating on what the function for each of those options is?

Also, how did you come by this information? is there an open case, or do you work for PTC, or did you have a similar complaint?

I use both 2.0 and 3.0, depending on client needs, not to mention all the awesome improvements to surface freeform, and ISDX!

As such, when using 3.0 I need the shaders to behave correctly.

I also can't go around asking my clients to adjust their config.pro settings knowing that there will be a decrease in speed.

I can confirm the sliders for ambient and highlight/reflection return to expected functionality, but as mentioned above, there was a huge performance hit.

I am hoping this is only a stop-gap fix until the ?bug(s)? is(are) fixed.

I've got those confings from these boards. Can't remember exactly from which thread, but it should not be hard to find if the search engine behaves correctly.

These configs solved my problem with appearances.

I've been working with PTC support and it appears that many features of the new enhanced visualization have been changed, and not in a good way.  I keep reading that the shading with reflections mode is aiming to more closely represent the render output.  I'm not sure if it does or not, but all my shaders (appearances) from Creo 2 and older are now ruined by this new - let's just call it what it is - bug.

I'm fine with adding functionality or improving the look of materials. however, making shaders look worse, so they more closely match the not-very-impressive paid-renderer, that's not great.

The shading with reflections mode isn't, for me at least, supposed to be a close approximation of the renderer.  Instead what it is, is an enhanced visualization mode.  a clay modeler would tell you that the only way to truly evaluate a surface is by reflectivity.  But reflection alone is not enough - you need to have the shading and the reflection to read it easily.

The purpose of the appearance is to visualize and understand the shape of the surface.  This is, by far, the most important function of the visualization.  To those that think the purpose is to attempt to show what the object looks like in real life - I say, no that's not useful unless/until such a time as it is nearly flawless and 100% realtime with framerates of 20+fps.  Besides - really, we have to do things to real-life objects to be able to understand and see their form (e.g. if you want to understand objects shape that are glass, or chrome - you'd probably spray them gray or white) - point being it's more important to be able to understand the model than it is to be able to represent it close to realistically.

The reflection enhances the understanding when superimposed over good surface shading as it helps the operator understand the subtle normal changes... but it is not great for visualizing/understanding the basic shape of the surface.

I made the attached video to share the differences between Creo 2 and Creo 3.

while there are a lot of inconsistencies using the shading with reflections - here are a few of the most important problems.

Basic models will look "good enough" using the new Creo 3.0, but if you're like me and need lots more instantaneous feedback about the surface, this new and improved rendering actually blows.  Unless it's just a bug, in which case I totally understand but would appreciate it being fixed sooner than later. !!!

PLEASE don't start a flame about PTC - I have few complaints about Creo 3 and usually it's just a matter of getting used to new things.  But this, to me is broken and is interfering with my workflow a lot.  The config option listed above reverts back to a version of the shading engine that is unbearably slow.  It does function more as expected, just not helpful.

Lastly - I'll apologize for this free flowing rant - I need to get back to work, but I'm hoping that others might look at this and chime in.  The more squeek given to a problem, the more important it becomes. squEEEEEK!

Both use the ARX and both using the same model, scene file, appearance, and lighting

Did you ever ask Tech Support? Was this ever resolved?

‌yes i discussed with tech support.  Spent 20-30 hours back and forth with them.  In the end they completely agreed there was a problem and created SPRs for the issues.   Hahaha well thats it.  Guess we will find out if things are fixed or not when creo 4 or maybe 5 come out.

ridiculous but i guess its to be expected.

I had similar issues and several users complained about this. PTC has informed me today of a config.pro that has solved our issue.

The option is update_old_appearance. The options are never, always or prompt. I just defined as never and my model colours are back to as they were.. I will continue to test before closing the case.

Hopefully this will you.

Nope - this does not help me at all.  Thank you for your reply though.

The appearances are still, completely broken.

I have attached a video that shows the sliders effect in shaded and real-time shaded modes... hopefully it's clear what's wrong with this video.