Am I missing something, or is there something fundamentally wrong with the way Creo handles datum plane visibility? When I want to assemble a part using datum planes, I typically end up with a situation something like that shown below. The graphics window is close to useless, and I have to navigate the model tree to find the right plane. 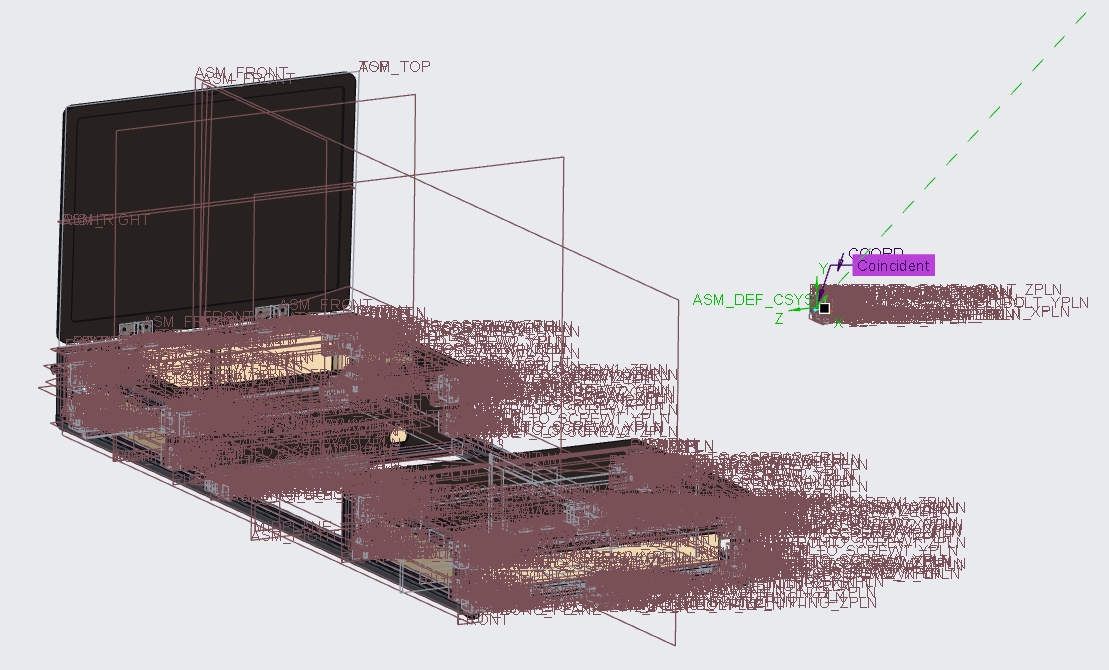 I know I can use layers, but its more of a workaround than a solution, not something that I'd expect from a 20 year+ application. Am I missing something, or is there an easy way to just show the datum planes for the active part, and whichever part or assembly I'm trying to assemble too? Surely the part assembly process should allow me to easily just click on a part and show only the datums for that part?

Your start part should be set up to automatically create layers and add features to layers "by rule".

I've got my start part with layer rules setup, but its still a very laborious process for something that needs to be done every time a part is assembled. Opening the layer tree, and turning the layers on or off in the relevant part takes several steps.

It strikes me as being an hangover from Autocad when layers where fundamental to the work flow. Granted, the can very useful for big assemblies, but the layer methodology in Creo is far more cumbersome than it should be for something as simple as assembling parts. There should really be an option to have datums show on-the-fly in the appropriate parts when assembling.

I don't have much hope that PTC will ever bother to sort it out, so I've tried to set up a workaround using mapkeys but without much success. Is there a way to set a mapkey so it will turn on or off the datums layer in just the selected (not active) part or assembly?

I would not hold out any hope for PTC to improve workflows.

If you select a part, then activate it, then go to the layer tree, it shows the layers for just that part so I would use that to make a mapkey to turn on and off layers of the selected part. Maybe it will make the process faster.

Thanks for the suggestion, I'll see what I can do.

We have all our datum features hidden by default. So even if we toggle the visibility of our datums, nothing will show.

We also have a couple of mapkeys which will either turn a specific group of layers ON, or lets the user select a part which layers will be shown. That will allow a user to quickly constrain a new component.

Another mapkey will turn all layers back OFF.