Does anyone has any experience in modeling the Fence in Creo 3 or 4.0? Like in solid work, there is an option from library to make the fence directly but did not find anything similar to this or could be different, in creo.

Dood, honestly, I can't even understand your question.  WHAT "Fence"???

It's obviously this fence...(first hit on a google search on "creo fence") 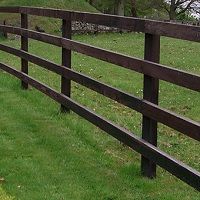 I thought about the fence a bit more...and decided to take a challenge to build a model of a fence.

So I have created the ground and the outline of the fence (an intersect of two surfaces). On the intersect I created two patterns of a point, one pattern for each (alternating) pole. It's the only way I know how I can create a pattern which follows a 3D curve.

Next I created an assembly and placed two poles, each with its own reference pattern.

So far so good, but now I am facing a problem with placing the rail (or plank). I have constrained the rail to the first post of both patterns, and idealy the rail would alternate (so with 8 poles in total I would get 4 rails).

But when I pattern the rail, the rails will honor the constraints to the first pattern, but will all point to the first member of the second pattern.

I have tried grouping the poles and the rail, but then the result gets worse. Maybe I need to constrain the rail differently...

I have attached my assembly, care to take a look?