First I'll show the problem I'm facing:
1). I have a simple part modeled in Creo 3.0 - M 130 - with two features. I have placed a roughness symbol on the second feature as shown below, and I have it on the drawing: 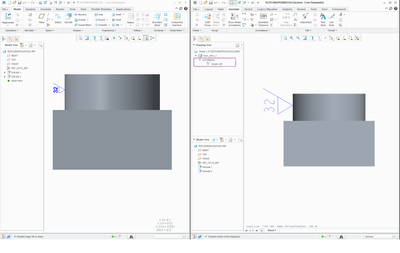 3). Next I resume (unsuppress) second feature and it shows itself on the drawing BUT without roughness symbol. See below. 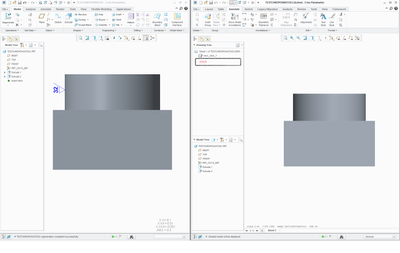 My question is: How can I make it AUTOMATICALY to show the roughness on the resumed (unsuppressed) feature on the drawing? I can not make it manually, since I'm making an automatical drawing tool, that suppouse to make it without user interaction.

I would like to mention also, that with the dimension there is no such issue. They shown without any problem.

Polish PTC support have no answer for this issue. So I'm looking for solution in more experience environment  😉

Thank you for any suggestions!

The basic problem you're having is that the roughness symbol is a child of the surface, correct? If you suppress a feature, Creo will also suppress all features that are children of that feature. If you then resume the original parent feature, the children are not automatically resumed. You have to explicitly resume them. If you are programmatically suppressing and resuming these things, maybe you could group them, suppress the group, then unsuppress the group later when you want it to come up? I don't know if this will work, it's just a guess.

Thank you for your answer.

I'm not sure that your approach is correct. I've only one feature - Extrude 2 - which I suppress. Surfaces of that extrude are not explicitically shown, so there is no way to unsuppress them manually. I've tried to make a group of only one extrude feature and suppress and resume. Nothing has change, the roughness symbol on the drawing dissapears and doesn't want to show up again.