As I dive even deeper into the mysteries of Creo 6.0, I find myself experimenting with the mirrored assembly component.  Traditionally, our tooling designs use family tables to vary features on dieblocks that are mostly symmetric.  When I say "mostly symmetric" I mean that some features, like the parting surface or runner and gate systems are symmetric around a top level assembly plane.  But other features may not be symmetric, like waterline systems or the cavity mark number.

I've been experimenting with the mirrored component as a possible alternate technique, and I've noticed that a mirror component that is saved as it's own file still maintains geometric symmetry, regardless of if the feature history tree is passed along during the save.  I thought that maybe after mirroring the part, I could open the mirror and add new features that would not be reflected in the source part.  As an example, dieblock 1 is created, then saved as a mirror as dieblock 2.  I then created new extrude features after the mirror that mark each block as "1" and "2" respectively.  Sadly, the symmetry between mirror components is bi-directional, updating either dieblock updates both, regardless of when the mirror was applied in the history tree.

What would make life super great for me was if I could make the mirror part behave sort of like a family table.  I could model all the geometry that was going to be symmetric, sort of like how a family table has a generic source, and then after mirroring I could then add the features that were independent of each other, like the cavity marks that I mentioned.  The mirror would keep the stuff I wanted to be symmetric, and I wouldn't have so much work tracking the features that were not symmetric.

My gut says that creo won't allow this, but maybe one of the forum experts can confirm my suspicion

If I understand what you want to implement, I think it is possible by mirroring the parts (not in assembly mode). Try the following:

Open the part of interest

Select the Geometry only and Geometry Dependent options

You will then have a mirrored part with a mirror merge as the first feature. You can then add features as required that are unique to the mirrored version. This mirrored part will update if the mirror reference is changed so that the symmetric geometry is controlled by the reference part.

So the key is to not be in assembly mode when engaging the mirror.  Why does creo see a difference in context if a part is mirrored in the assembly versus the part mode?

If I understand the mirror feature correctly, the geometry only selection means I'm recreating model surfaces only, no features that I can edit, since those will be controlled by the source part.  What is the geometry dependent option saying?

This is a design intent map detailing how to structure the parts to provide the functionality you want. This exploits a single master model part to define the mirrored (common) features and enables the addition of features unique to the left and right versions that do not affect the master model geometry. 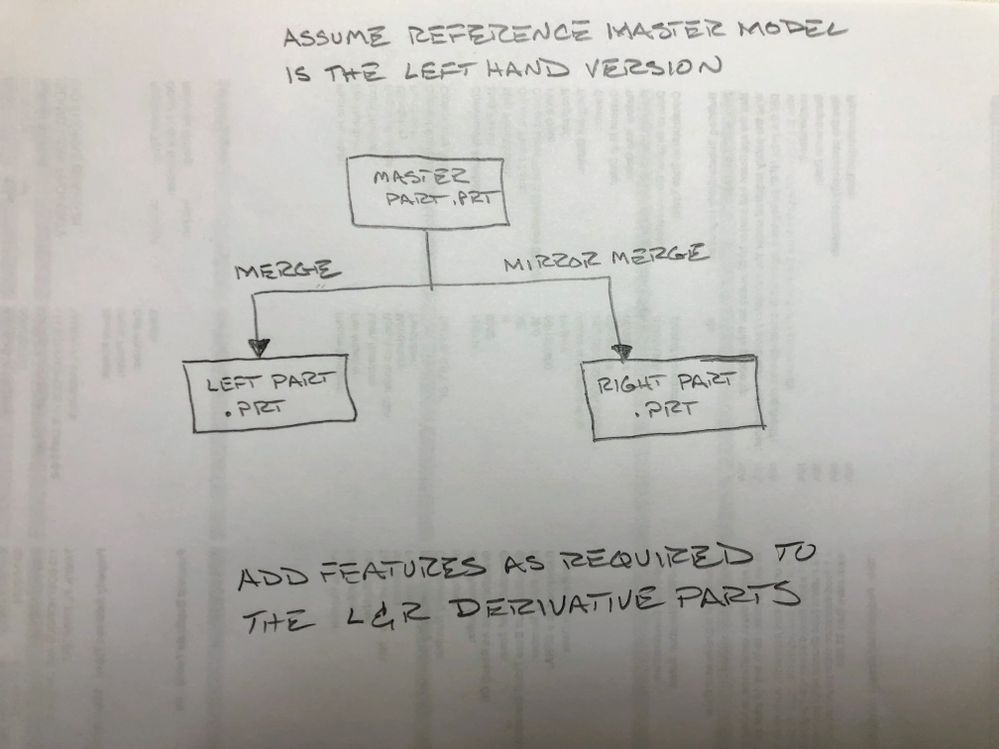 Okay, that makes intuitive sense to me.

The master part controls the common geometry. What if I don't select the geometry only option?  Would I get a mirrored component that had features that I could control independently between the source and mirror?

The merge branch I totally understand, that's being driven directly by the master model.  I did some quick searching and I was able to find references to a "mirror merge", but I'm not sure how to perform this in creo 6.0.  I suspect that mirror merge is the same as file>save as>mirror part. But when I do that I lose control over selection of the mirror plane.

The design intent map laid out looks very similar to how a family table is laid out.  Most of the designers at my company would use the generic instance as the master model, collect the varied features into groups and then suppress them in order to create a pseudo-mirrored component.  (This works for them because the features being mirrored are typically things like waterlines.)  Is it worth the additional work to map the parts out as you've shown, or would it be more effective to work within the family table?

That support document link is super helpful, I'll have to run some experiments with design intent map that you laid out so I can figure out how well it would work for what I'm trying to do.

My current tool isn't a great example of what I'm trying to accomplish, so I don't have example files to share that would make my intent clearer. But I think I have enough information that I can continue experimenting on my own.

I also agree on the family table thing.  If I have to control a bunch of features all together, it seems like the design gets out of control pretty quickly.  So far I've had the best results when I restrict family tables to dimension variation only. To answer your question, we do use family tables and we also use windchill.  I'm still struggling to understand the nuances of windchill, so I couldn't be sure if a potential issue isn't just me not knowing something instead of the family table doing something weird.