Center of Gravity in Drawings

Center of Gravity in Drawings

Considering that the position of the CoG can be calculated using the mass properties function, is there a way that the CoG can be shown in a 2D drawing and be dynamically updated as changes are made to the part/assembly?

I know I could display the CoG csys and then manually lay a symbol over the top but I'd like this to be automatic.

This thread is inactive and closed by the PTC Community Management Team. If you would like to provide a reply and re-open this thread, please notify the moderator and reference the thread. You may also use "Start a topic" button to ask a new question. Please be sure to include what version of the PTC product you are using so another community member knowledgeable about your version may be able to assist.
Labels:
0 Kudos
Reply
Notify Moderator
18 REPLIES 18

Ensure that the Feature Option is selected at the bottom.

The following pictures should explain. 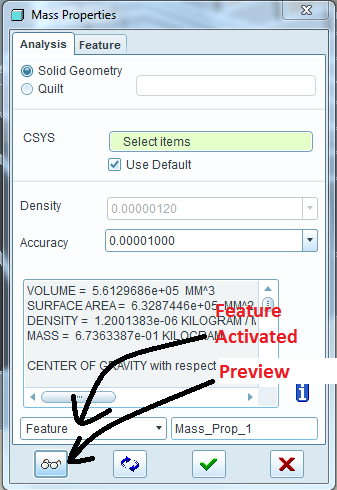 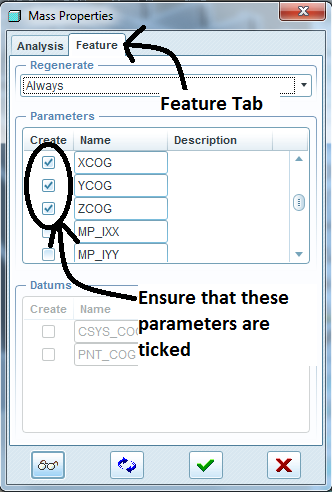 Having done this, you may choose to have a POINT at this COG which would update dynamically at every REGEN.

How do you turn on the CSYS_COG or PNT_COG as they are greyed out?

I can create the feature as you state above but the resultant feature has no tangible properties to which I can attach a drawing symbol. In fact I can't find where the feature sits within the model as it does not create any visible reference when it is highlighted in the model tree.

Thanks for clearing that up.

BMX is not listed in my licence file as an optional module. I'll be going through a licence file review with PTC soon when I go from WF3 + IntraLINK3.4 to Creo/Parametric + PDMLink.

I have created a csys with some random x,y,z offset value

Then i tried to control these offset values with relation

I have also attached the sample part for your reference

I hope this will help you

Great bit of out-of-the-box thinking there and another few points I have learnt from this:

1) When creating the mass-properties feature ensure that you select the CSYS that you are to later going to reference your COG indicating CSYS from, as leaving default box ticked does not mean that the COG is calculated from the default CSYS in the orientation you may expect!

2) The COG indicating CSYS can be positioned in the model tree before any features and before the mass_properties to which it is referenced.

3) Although the COG indicating CSYS can be placed anywhere in the model tree, the mass_properties feature will base its results only on preceding features. I have not yet determined what effect assembly driven cuts have on parts as these always appear after the last part feature.

4) In order to position the COG symbol on a drawing you need to use a datum point instead of a csys. However when placing the symbol on the datum point it is not snapping to the COG point centrally, but is offset slightly to the left, which to say the least is a bit annoying after going to all this trouble to determine where the COG is!

However, one can do it this way by creating PART relations as given in the picture...

XCOG is defined at the "Part Level"

xCOG:FID_MASS_PROP_1 is at the Feature Mass_prop_1 level. The feature parameter is called in to define the position of a point which is offset to the FRONT, RIGHT and TOP planes.

Thankyou, much easier to use the name rather than the dimension number.

Now I have just got to find out why the COG in my complex assembly is being calculated in the wrong direction. 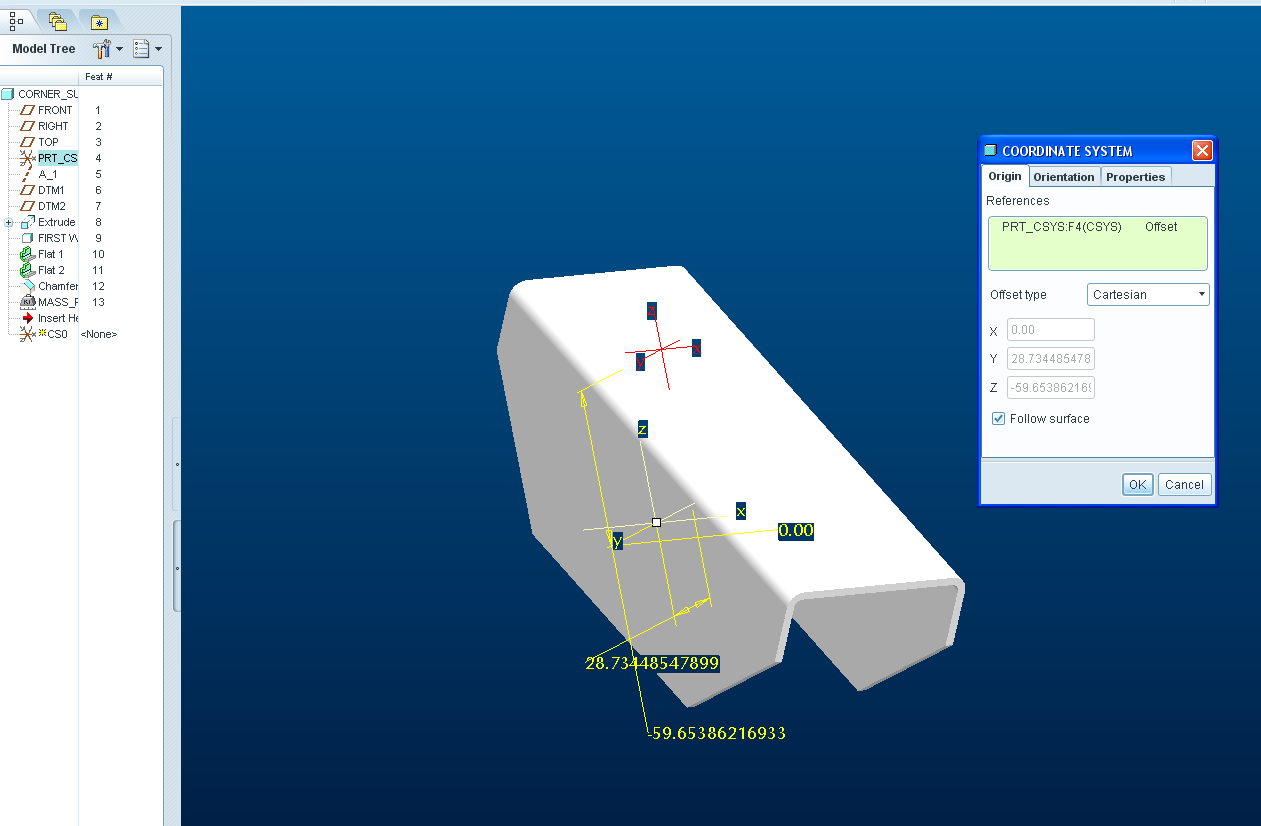 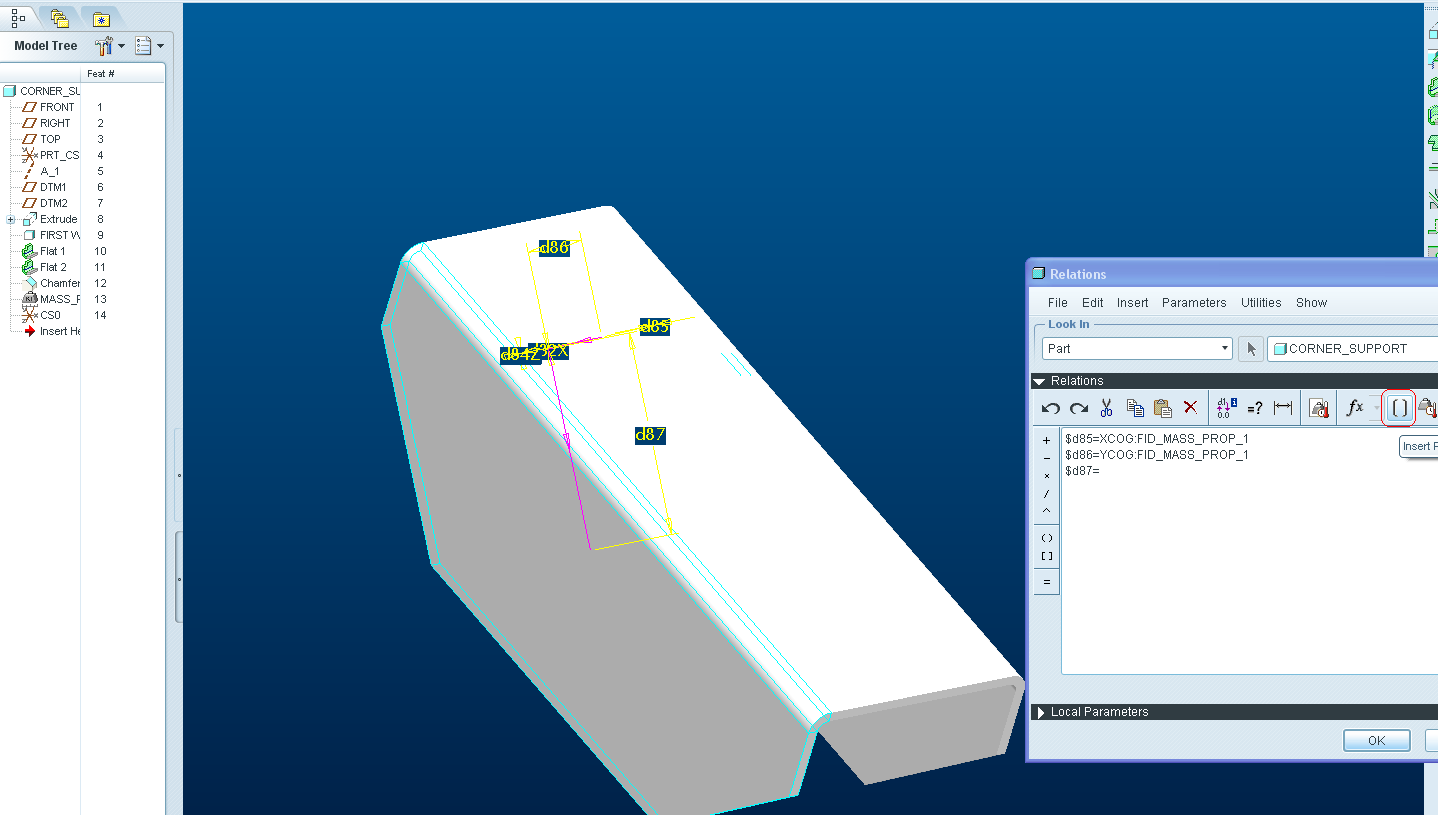 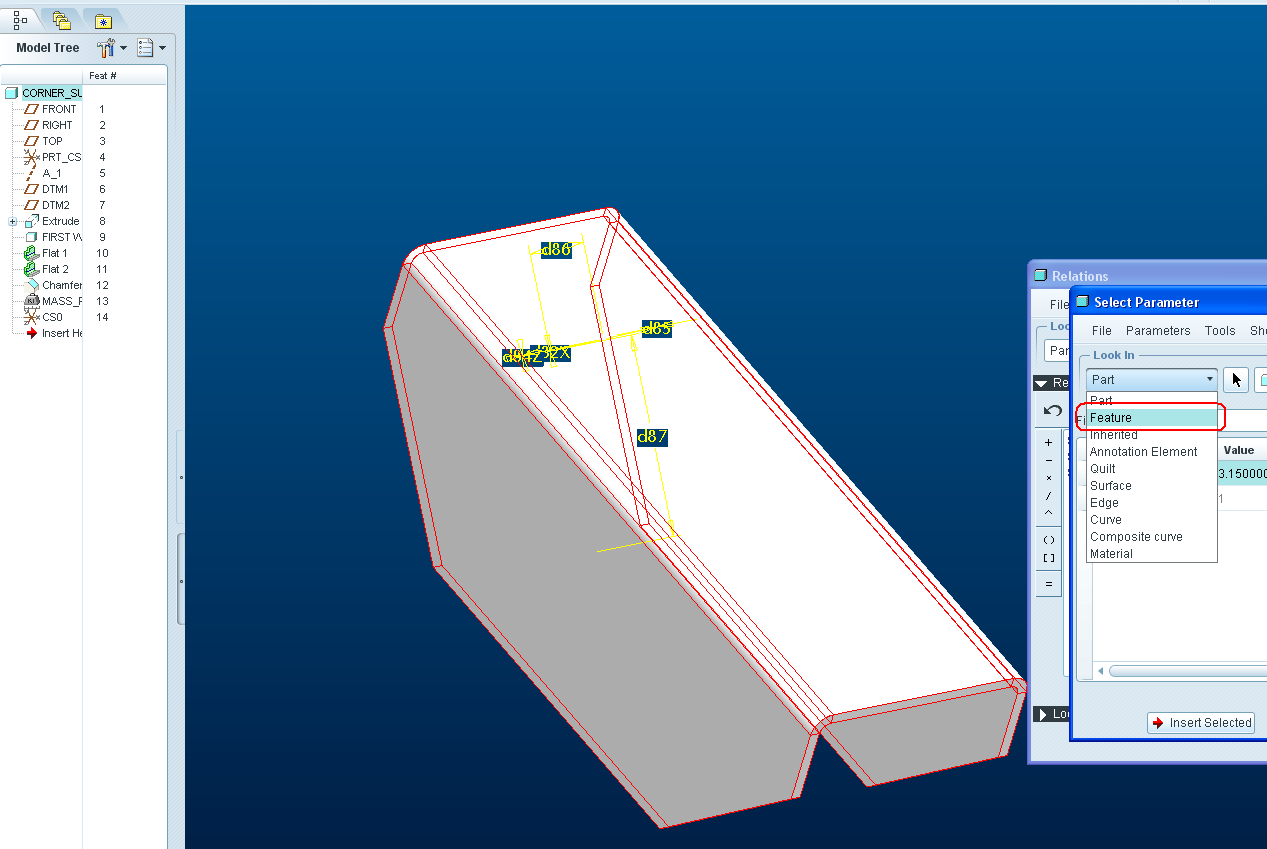 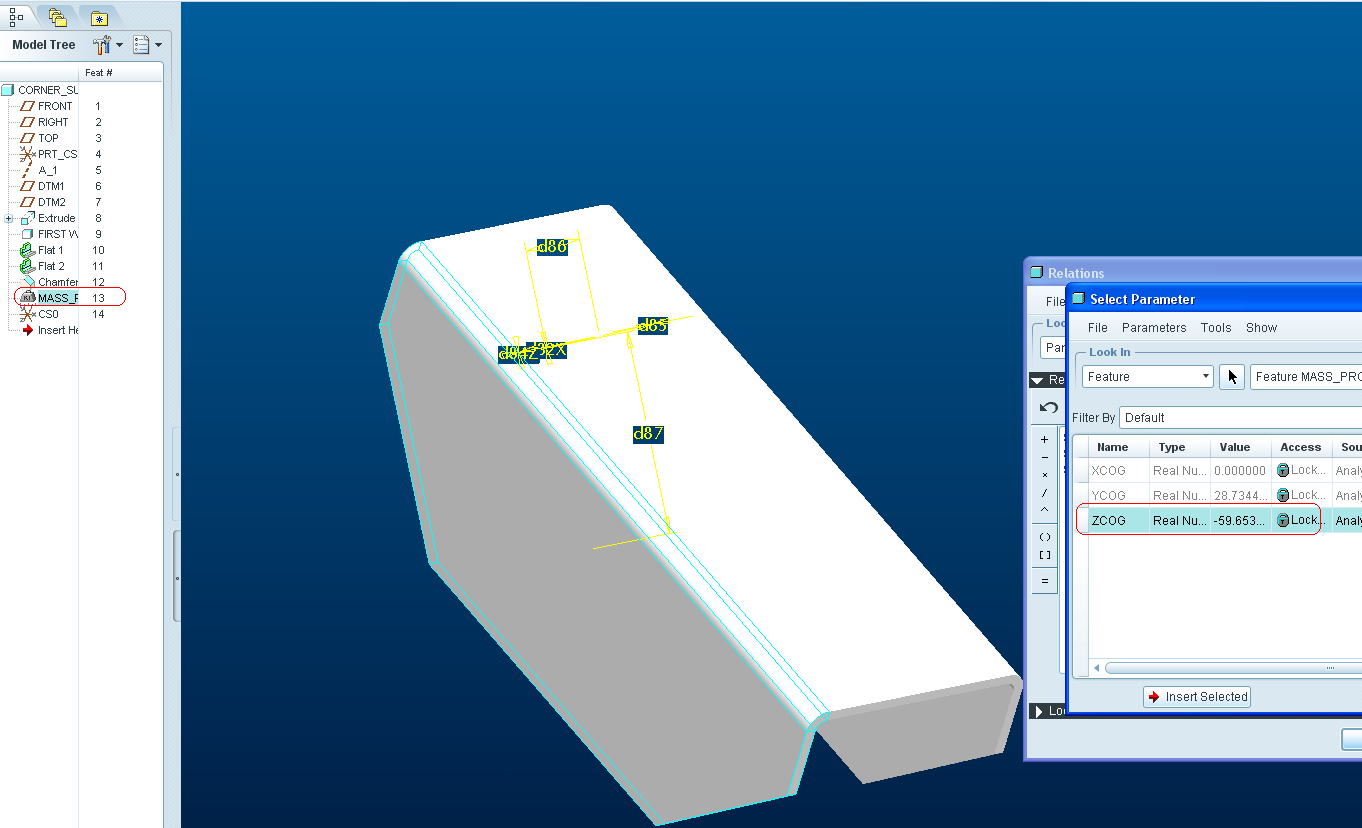 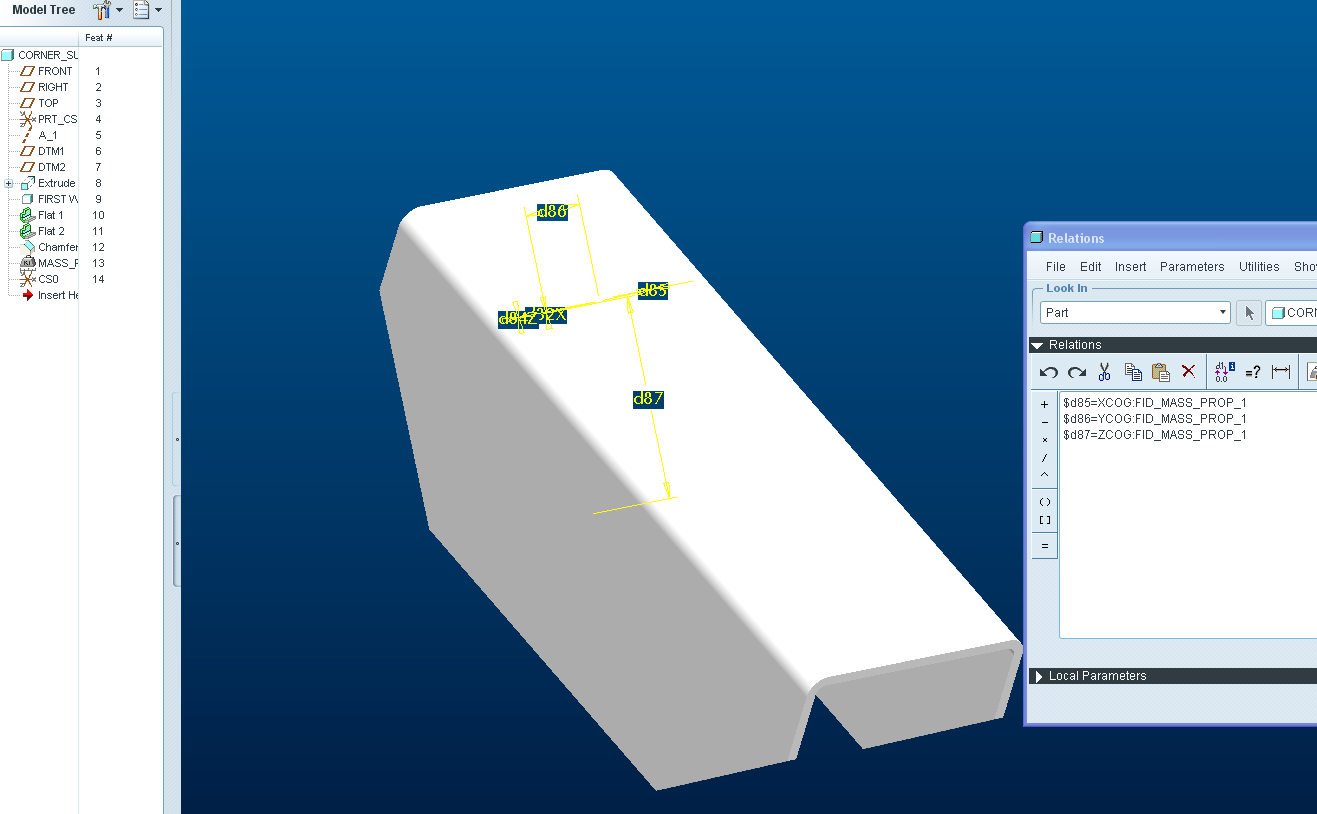 I have uploaded the images again

Hi, you should put "$" symbol before the name of the dimension, just in case you have a negative value:

may i know syntax for retriving the weight or CG indivudual values to drawing and the family table( is it possible in family table?)

You have asked for 2 things

a)You can use system parameter pro_mp_mass to make your user parameter and use it in drawing, or family table

You can use the feature parameters xcog,ycog ang zcog to make your user parameterand use it in drawing, or family table

Yes this is possible in wf3

I have attached a part made in wf3 for your reference

Thank you for your valuable time and guidance!

I am extremely sorry I am bothering you.it may be a simple question! i coudnt figure out 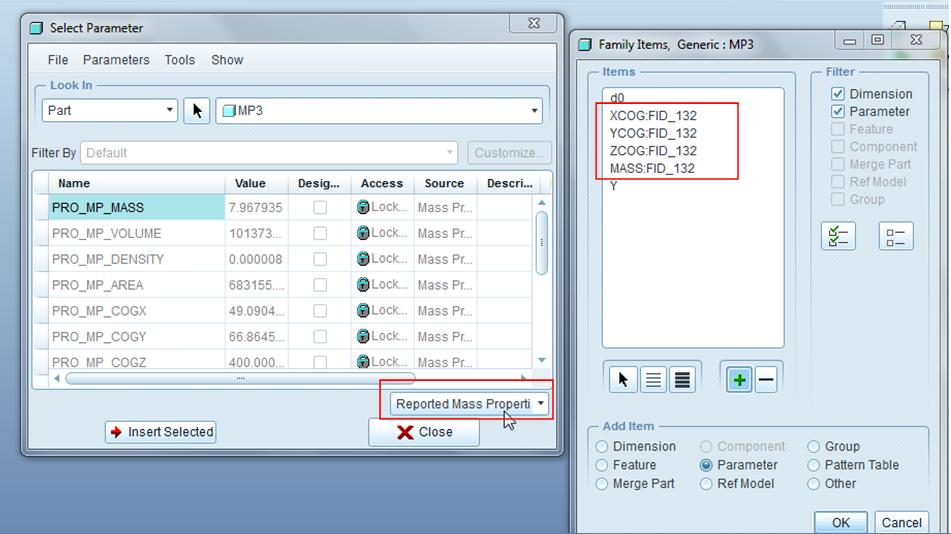 This is for your reference(how to use feature parameters)

You can use the method best suited for you

Thank you for responding so promptly. I can tell you that I honestly was not expecting a response as quickly, as is the case with most of the forum, but you are obviously different. The response you gave me was so detailed and thoughtful.

Thanks again for spending time for me!