Help files not much help: Creo/Pro

Help files not much help: Creo/Pro

I am running into serious issues with help files being way to far out of date.

I am reading things that are clearly wildfire terminology and simply cannot find the Creo ribbon equivalent no matter what I try.

Is there an active group within PTC that shows a level of urgency on fixing the Help files?

On the bright side, I found this... a color map for the classic interface when looking for pen table information. This one never even got updated to WF!

This is, after all, a critical UI component of the platform. How could this ever pass quality protocols. 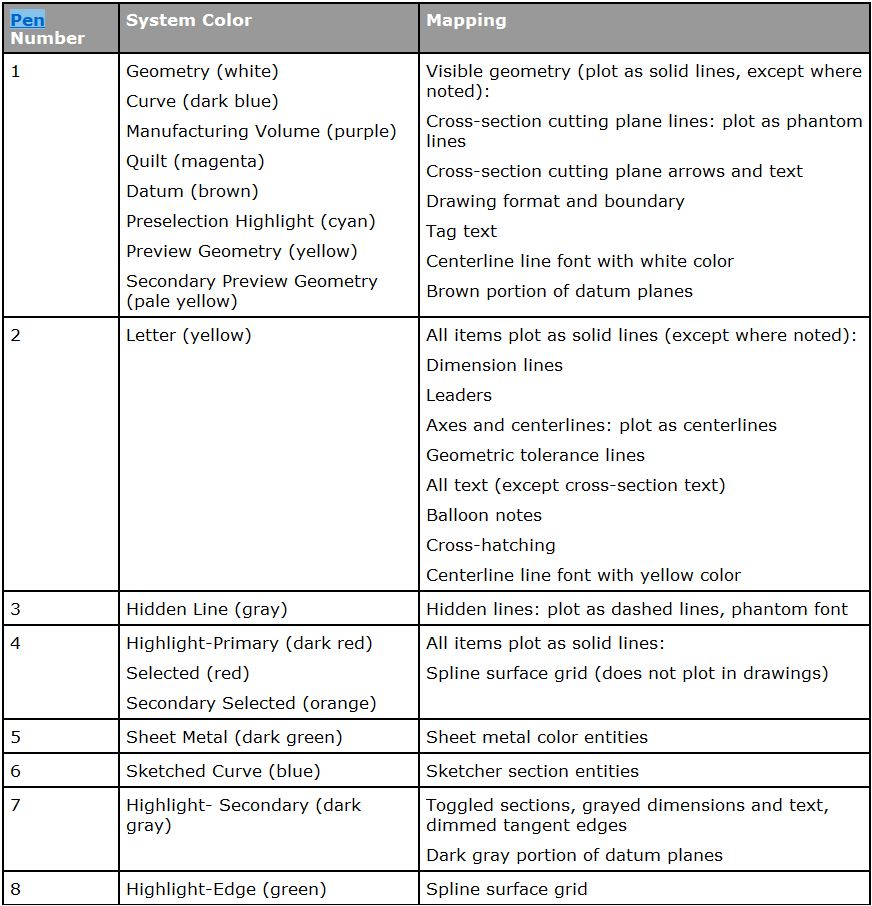 But more importantly... did you ever get the pen table information? I've posted a mini document I made before to help people with this. It's better than the help files, that's for sure. Give a yell if you need it.

I did, Brian. I opted for using line width on text for now. I saved all the pen table stuff in a development folder for later use.

I agree 100%. The help is way to cumbersome or out of date. I don't know how someone could not be embarrased.

My biggest suggestion for the people who control the "Help Documentation" is to add examples in the documentation. I can't believe I will praise microsoft, but whenever I have an issue with an excel function there is very good explainations and examples on how to use the function in Excel Help. Creo/Windchill not so much.

I can only imagine if you are trying to search for a particular command/word and it hasn't been updated that fustration would be pretty high.

I will say that I got a response from the Technical Writer VP and it was very helpful and they seem very willing to do whatever it takes.

For laughs, look up "spinal bend" (which doesn't even seem to be in creo anymore). Anyways, in the "Example: Creating and Modifying a Spinal Bend" it gives you is pages scanned in from the old v19 BOOKS!

Maybe I've been posting too much and I'm going a little batty... but this Help Documentation thing really strikes a nerve with me.

I have some of the old paper books... and they were quite good. Not only did you get a description of the various commands, but you got copious amounts of examples. In fact, there were pictures, and mini step-by-step tutorials throughout the books.

When PTC discontinued delivering the books, I was disappointed. I realize they were costly to produce... but they were a ready source of information. You could keep them open on your desk as you worked. Unless you have dual monitors, working in Creo or Pro/E with a webpage open is really tough. Obviously I was forced to adapt.

I have never much cared for the HTML help files included with Wildfire or Creo. But now, they've gotten really really bad. It seems like ALL of the examples have been stripped out. Were I a cynical person, I'd say this was done on purpose in hopes that users would require more training... but I'm not cynical so I won't go that far. I'll just say it's awfully counterproductive to remove pictures and other helpful graphics from documentation that's intended to provide assistance to confused users.

Sometimes I'll search for an arcane command or some little-known feature that I know I have used successfully before. Now I get a few lines of text that attempt to describe an operation that could be far more easily described with a few pictures. I find the whole "help" experience very frustrating.

I am encouraged by the advances PTC is making in the area of contextual help. If you have the ability to install the PTC Learning Connector and you have access to the E-Learning libraries, you've got a wonderful resource at your fingertips. Contextual help will dump you right into a PTC University tutorial giving you step-by-step instructions on the specific action you're attempting. This is great... but most customers don't have the E-Learning libraries. Ones that do have them don't always seem to have the Learning Connector installed.

I realize PTC has been working on this area and I'm sure they'll get it ironed out. What's annoying to me is that it had to get so bad before someone noticed and tried to take action to correct it. As I've said numerous times recently, I'm encouraged by the effort PTC seems to be making of late to correct long-standing problems across the board. The worrisome part is that there were long-standing problems in the first place.

For awhile it seemed like Pro/ENGINEER and the other PTC products were like a rented beach house no one was maintaining. For a couple of years it's nice and still functions well. People still pay to vacation there. But over time the wind and the sea start peeling the paint, the roof starts leaking, the windows begin to rattle, etc. Eventually the property becomes harder and harder to book... people just naturally migrate to better maintained, more modern beach houses. Suddenly, the neglected beach house owner shows up, panics because he's losing money on his investment, and pours every spare dime into trying to correct the problems as fast as he can.

While it's nice to have the attention now... just what in the heck was going on during those "Wildfire" years when many of these small problems started to fester and cause damage? Who was maintaining the beach house for the first decade of the new millennium?

I don't know that those questions have answers. Who knows maybe those questions aren't even fair. My assessment of what happened during those years certainly won't ring true for everyone. But just as the RUGs started to fade and wither during those years, I felt PTC's core products did, too. For a time the whole company felt like a rudderless ship.

I think we're beyond that now... at least I hope so.

Brian, I think I understand all to well what happened but among polite company, it would not be honorable to state what I have seen all to many times in industry.

Brian, I have the E-Learning Library but it is very limited. Should this be accessing different tutorials with context sensitive help? I just get dumpled into the manuals if I use F1.

You need to install the PTC Learning Connector for a live link into the learning libraries. See if you can find it on the PTC.com website. It's fairly easy to install. Once installed, it asks you to log in (basically logging into your ptc.com account). When you need context sensitive help, it drops you right into the appropriate PTC University course and specifically puts you into the section that can help you with your current problem.

If you get stuck or can't find it, let me know. I'm not sure where we downloaded it but I know once it's installed, it works well!

Thanks; the Learning Connector is installed by default in Creo 2.0 when you install help. Not too useful if you only have a basic module. Mostly it has the upgrade modules and talks all over the place about "enhancements" (they like that word a lot!). It does connect you to the knowledge base though, which is useful.

I looked up "snap to grid" and it still talks about Tools/Environment. Lost that in the new ribbon interface. Now it is config.pro option snap_grid or setting it upder the options/sketcher-snap to grid. You won't find that anywhere though. I know, I looked 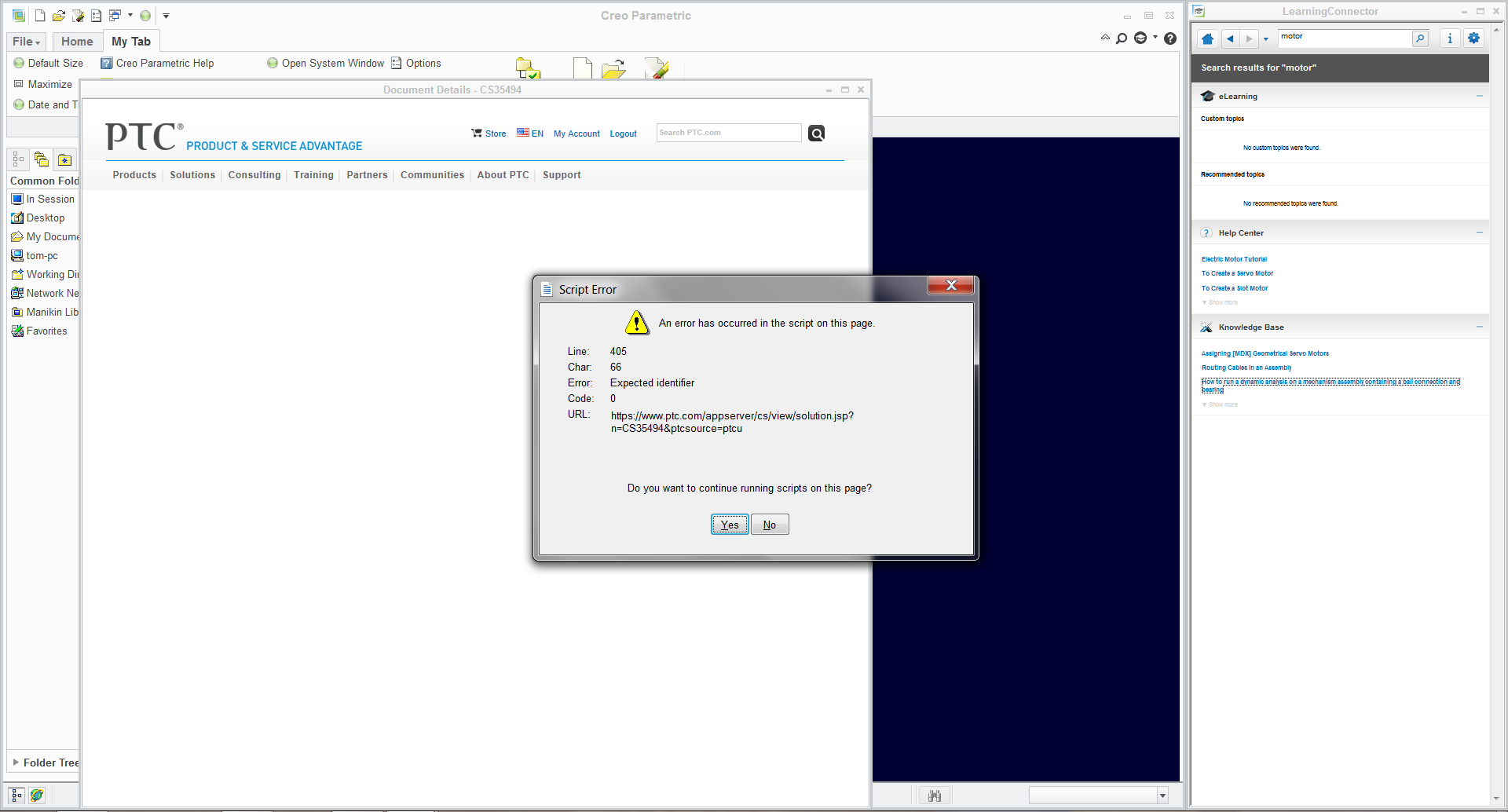 The snap_grid option has been around for a long time. That's not new.

lol... what is new, is that the snap_grid option actually works in Creo 2.0. In Wildfire 5 itdoesn't matter what you set it to. It turns on no matter what. You have to re-toggle it to get it to turn off. Who knows why... but it works again in Creo 1 and 2.

The less "helpful" the help is, the more training and PTC University is sold. I think it's a matter of economics.