At the last event "PTC LiveWorx Europe 2015" in November of 2015 it was presented a roadmap for the development of Mathcad Prime 4.0 and some future steps (themes) for Prime direction. PDF "PTC Mathcad Roadmap_2015" can be found in attachment. You can see what updates are planned for version 4.0 (now the release of version 4.0 is scheduled for the 4th quarter of 2016 year) and is scheduled for subsequent releases after 4.0.

Update_Jule 2016: In June of 2016 year within an annual meeting conference "PTC LiveWorx 2016" the new program of development for Mathcad Prime was submitted. For future release of Mathcad Prime 4.0 the same new planned features were shown in the program about which I wrote earlier here (except for expanded options of creation of 2D plots - this feature is transferred it for 5.0 version😞 Mathcad Prime 4.0: some new updates

PDF "PTC Mathcad Roadmap_2016" can be found in attachment.

Update_February 2017: Added the presentation about Mathcad Prime 4.0 from the PTC Forum Europe which was in November 2016.

JeffH1
Amethyst
(in response to VladimirN.)

This absolutely stinks.  They have move the plotting enhancements back a whole year to Prime 5.0.

For me, plotting is the deal breaker.  I can't insist that my students format plots well while having them use software that can't do it.  Unless I misunderstand its features, I can't format plots for publication using Prime either.  It looks to me like Prime is just going to be a module in Creo.  So, I guess I use V15 until Prime 5.0 comes out?

‌Couldn't agree more. I've more or less stopped using Mathcad (other than for legacy worksheets). I write new stuff in Mathematica. Its far far superior to Mathcad. But does take a little longer to get up to speed with. PTC has effectively killed what used to be a good product.

When is Mathcad Prime usable and has the same functionality then mathcad 15 with same usability and speed.

Is this maybe possible in future or do i need to change to Mathematica?

‌I'd suggest you give Mathematica a try.  I did. And haven't looked back. It's like Mathcad an steroids. The only thing is, it takes a little longer to learn to drive.  But once you get into it, you can do a zillion more things than you can with Mathcad. And it's constantly evolving. And there's heaps of help and examples available. And it's about the same cost as Mathcad.  And Wolfram offer a full blown home version at very low cost for non commercial use. Good luck!

With Mathematica (or any of the other major math/eng. apps for that matter), is it possible to mix text, symbolic calculation, and graphing so that all this data can be easily presented and published in an article or book chapter format?  This is the main reason I use Mathcad.  If I could find this functionality elsewhere I would flush Mathcad in less than 15 picoseconds.  Thanks!

In that way you can forget Matlab or any other programs.....

But im open to suggestions

Nice features back into Mathcad and other good enhancements.

Keep it up and good luck !

But what about intercommunication of several Mcd files (without Creo or third-party tools) ?

Mathconnex was a great tool and seemed to me a quite value-added component.

I have all of the "M" languages (MathCad, MatLab, Maple, and Mathematica) installed on my work PC.  When I want to write some "mathematics", particularly for students or to work on a particular physical problem (how to make a ceiling-mounted 2-axis Galvo system move a laser beam on a cylindrical screen at a certain elevation with respect to a viewer without drawing "smiley" faces, for example), I turn to MathCad.  This was especially true a decade (or more) ago in the days before MathCad Prime (which, for pure MathCad, seems to be a step backwards).  I have largely abandoned MatLab (except, again, when colleagues need my input), and have not (yet) warmed up to Maple (I find the UI awkward).  I appreciate the power of Mathematica, but find its insistence on doing it "My Way or the HighWay" annoying (so I write my own functions to force it to follow more normal mathematical conventions).

After several phone calls and some hand-holding from Tech Support, I was able to install MathCad Prime 3.1 on my Windows 7 system, and to get it activated.  None of these steps were easy or intuitive -- I sent a followup message to PTC describing the User-Unfriendly Interface that makes installation so problematic.  I am about to do a second install, but I realize that I've seen no "Official" mention of the Microsoft Operating System known as Windows 10!  Indeed, the (outdated) on-line documentation that I could find for MathCad Prime talks about Windows 7, Windows 8, and Windows 8.1, but not Windows 10.  Forgive me if I'm wrong, but hasn't this OS been out for a while?  Didn't we just get the "Anniversary" Update?

So, here's a question -- has anyone successfully installed MathCad Prime 3.1 on a Windows 10 (x64) system?  Did it work?  Are all the features active?  [I noted a mention of Windows 10 in the Community with regard to MathCad 14, one of the last "full" versions, and there seemed to be a few problems ...].

I've been running Prime 3.1 under Win 10 Pro 64 bit for about a year. So far no problems. But, since MCAD went backwards I've also invested in Maple and Mathematica (MMA). Both of which are way better than MCAD. Maple is a great MCAD replacement.  And can do so much more. MMA isn't ideal if what you want is a simple to use computerised calc pad. But, if you've got the time and the will to learn how to use it, it can do some ridiculously impressive things. Personally, I've found the Maple UI much better than Prime 3.1. Might be worth you persevering a bit? I now only use MCAD for legacy worksheets. Sadly, I think PTC has probably killed MCAD.

I use Mathcad and Maple.

About Mathcad see please this forum.

I think PTC is trying to save Mathcad after MathSoft threw (sold) it.

Very impressive!  To be honest, one of the things I loved most about MathCad (I still have the distribution disks for MathCad 2000i, and had been using it for maybe a decade before that) was the ability to easily compose "math-looking" formulas just by typing, with no need for mouse-clicking to group numerator/denominator, do subscript/superscript, exponentiate, etc.  I also found writing MathCad functions fairly intuitive, and loved the symbolic stuff.

I'd tried Mathematica, but found myself at odd with Wolfram's decision to "invent a new syntax" for programming notation and for mathematics (one of my earliest issues was dealing with 3D rotations and the appearance of yet another Wolfram coordinate system).  I ran into Maple at a trade show, and knew that it shared some kinship with MathCad (PTC had taken over by this point, and MathCad wasn't "progressing" as it had been), so I gave it a try.  Again, I was really looking for something I could both use (to get an answer) and document/publish (i.e. have Math look like Math, Text look like Text, and have them easily and naturally co-exist).  I confess I probably didn't spend enough time with Maple -- as I still have it, maybe I'll spend some more time with it, if only to appreciate your examples.

Mathcad and Maple have no solution 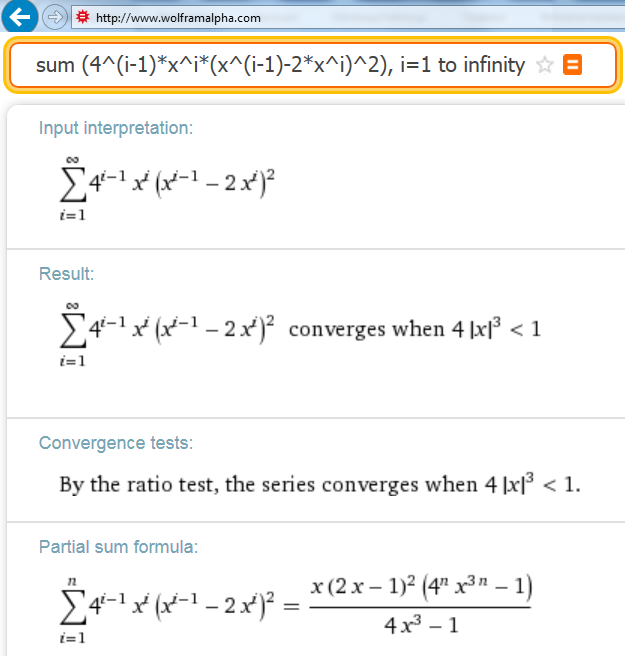 After this Mathcad has solution

Not sure what you've done with Wolfram Alpha.  But, as far as I can see, Mathematica proper (V11) provides the same solution as Mathcad. And in one easy step - see below.  In my experience Mathematica is probably the best of the bunch for stuff like this.  But isn't so good at some of the simpler things.  Like laying out straightforward, traditionally formatted calculations and units handling.  Mathcad and Maple are better at that.  In my opinion 😉 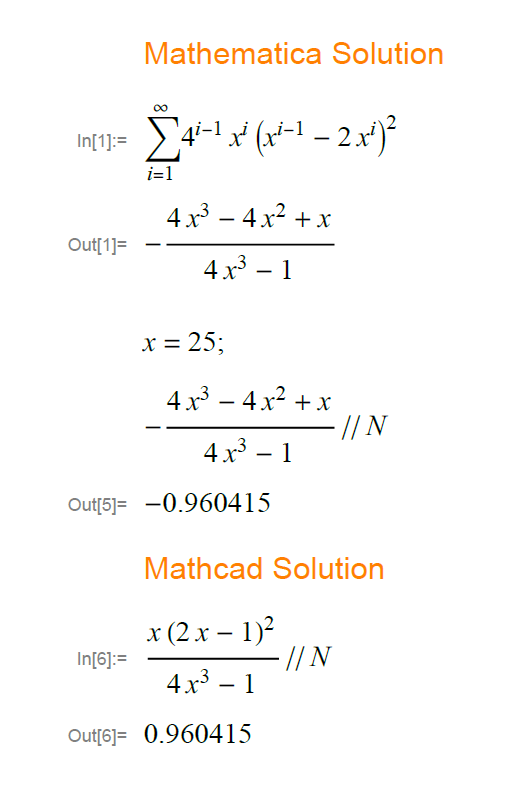 Sorry, I have not Mathematica. It's own want to have not me but my money.

Why do people make more worse versions with lesser function in a newer Program and higher price?

Is there a reason i want understand. Is it possible to say in which Prime version (120? lol) same features as in Mathcad 15 are?

And when i can update to Prime?

We need less programming code in company only very few stuff. Only have really long and complicated formulas. Some stuff needs to be iteratively solved.

In my latest iteration code which is really long i had problems with mcad (very slow writing until impossible rowbrake not possible in code). I dont know why it gets so slow. I need better writing features. Not want to copy every Mcad page into word to make my 400 pages report with 99 percent copied mcad pages.

Still not knowing if there is a solution.

Why is it so complicated to add more word stuff?

Is Maple better in that way? Seems to be no alternative solution to the white board freely formula droping  place system in Mcad?

If you want Mathematica for personal use only, Wolfram will sell you a license for about £200 (that's UK Sterling). This gives you the full system with nothing stripped out.  That's a fraction of its full cost (circa £2,000).  And substantially less than Mathcad which sells for about £1,000 (and doesn't offer a personal use license, although the stripped down and somewhat crippled express flavour is freely available).  I think MapleSoft also offer a personal use license for around £200.

Or, if you want something that's free, you could take a look at Anaconda.  I've not used it.  But, based on a brief peek, it looks like it could be a viable alternative to the three Ms.

It's almost the end of 2016, according to the roadmap Mathcad Prime 4.0 will be released soon.

Is there any news about this version?

According to the latest issue of "PTC Support Advisor" release of Mathcad Prime 4.0 is scheduled for February 2017.

According to a calendar - only month is specified February there (updated as of February 10, 2017😞

According to the latest issue of "PTC Support Advisor" release of Mathcad Prime 4.0 is scheduled for the end of February 2017.

Looking at the list of features they are going to put in Prime 4.0 it is obvious that PTC have lost all the mathematical expertise from their development team.  How can they claim this is a major release when there are no additional mathematical functions and no plotting improvements?  They haven't even got the level of functionality in areas like scripting that Mathcad 15 has some 8 years after they purchased Mathsoft. This update should really called be Prime 3.2.

It is a shame that Mathcad has been relegated to just a jotting pad for engineers who just want their calculation of a simple bending moment to look good in a report when Mathcad's original promise when owned by Mathsoft was to be a class leading tool for solving serious mathematical problems in the quickest and simplest way possible.  If PTC had any vision they would hire someone to head up Mathcad development who is a mathematician first and a programmer second.  Someone who really knows what the competition like Mathematica can do and has the vision to take Mathcad forward and develop it to compete in it's own special way like the original developers did .

I agree with you entirely Andrew.  But this line of thinking has been ignored by PTC for quite a long time now.  On top of it, they still have the gall to charge a maintenance fee for v15 while that version is not being advanced either other than the same simpleton fluff features that I'm willing to bet few users actually care about.

According to this post Re: Using Prime 3.0, the determinant function does not handle a matrix with complex numbers. Don't ... is March 6th next week.