This is PTC description for this config option.

Set the config.pro option load_ui_customization_run_dir to yes, in order to load creo_parametric_customization.ui from (and save changes to) the run directory

What is Run directory?    In all my years of admin that term is unfamiliair.  They have preached loadpoint directory, start-in folder, and working directory.

It's the start in directory.

It's the start in directory.

Thanks Dave.   Its amazing how a small word like that can trip a person up. I just wanted to be sure.

When this option is set it's my experience that the *.ui file gets saved to the working directory at the time of the change.  So, it's possible then to have *.ui files all over your directories if you are not working in Windchill.

Doug, While it certainly is true that it will save your modified .ui to the current working directory, it's not going to read them from there.

On startup it reads the file from the start in directory. That's what this config option does.

It's not going to see all those .ui files in the other directories. This obviously confuses people. especially Admin's. I finally wrote a specific startup script for modifying the ribbon. I've added the following lines to my startup script:

This way I only have one ribbon file that gets loaded. which is shown in the system information window. No path in front of the file, means it was read from the startup directory.

This allows me to edit my system ribbon file cleanly, then when I exit Creo it's saved back to the start in directory. I can then use Cut and Paste to put it where it belongs so all the users can see it.

On startup Creo only reads .ui files from these three locations: 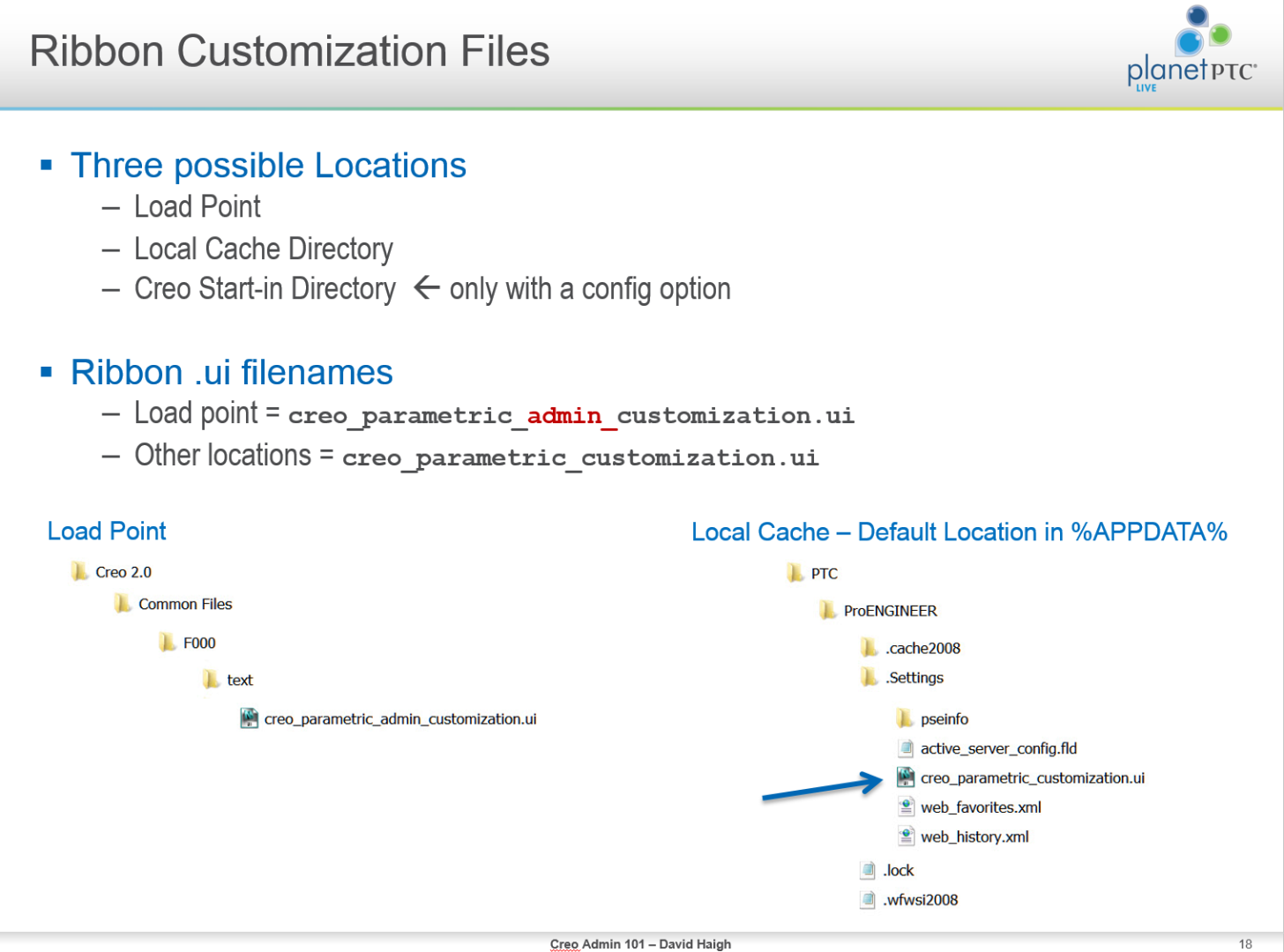 My point was that the config option controls both where it is loaded from and where it gets saved.  It's a nuance that is often overlooked when using this config option and I simply wanted to point it out.

Because Creo saves the UI file without user prompting and without an opportunity to choose where, this can result in many UI files everywhere.  As you said, only the one in the Start In will get loaded.  It also means that when a user makes a change to the UI and the file gets saved, it's fairly likely that file will be saved where it won't automatically be loaded at next startup.

For our use, having it loaded and saved to the working directory is problematic because we change working directories often.  So we set the user's cache to a network location and load it from there.

Olmo
Visitor
(in response to dgschaefer)

I Know this is an old tread but you might still read this.

The way you describe opening the customization file from a network location is exactly how i would like to set up my system. We have a bit of shattered program management here wish makes organizing your own preferences necessary.

could you tell me how i can make creo open the customization file from this network location at startup?

Is there a way to make it look for other files like the config file and part templates in that same folder?

The customization file (creo_parametric_customization.ui) loads by default from the Creo cache.  That's buried deep in the Windows user folders by default.  You can move it by setting the environment variable PTC_WF_ROOT. I do so with this line in my launch batch file:

I do have a note in my batch file that setting it to a network location caused performance issues.  What I do is set it to a local folder and back it up to a server location. At launch, I check to see which version, server or local, is more recent and copy the more recent file to the other location.  I think folder syncing would be better, but that option wasn't available to me at the time.

Olmo
Visitor
(in response to dgschaefer)

I think i do understand now.

I found some previously made batch files on our server so I will try to start from those and implement the "PTC_WF_ROOT" command.

Thanks allot for your reply.