ADVANCED QUESTION: How to show a layer only on ONE VIEW but MAINTAING the drawing dependency

ADVANCED QUESTION: How to show a layer only on ONE VIEW but MAINTAING the drawing dependency

I have an unwrapped curve of an oblique cut of a cylinder that I want to make it visible only in one view. The easy answer would be "make that view independent of the drawing layer status". But my situation is more complicated as the configuration of my assembly changes and it depends on the Drawing Program. So by making it independent I will make visible ALL the layers that otherwise should not be visible.

Any idea how to resolve this "unresolvable" situation.

All ideas are welcomed, not only ones realted to layers display: creating a new view overimposed of the existing one with just the curve on it or anything that could do the job.

If you need some pic to see exactly what I mean, please ask.

I tend to give those curves a layer of their own.  Then I can turn it on only in the view where I want to see it.

Overlaying views can be done if you have an alternate origin.  I use datum points for view origins since they have only one location.  I rarely know if I actually grabbed an end of a curve.

Thank you for your reply. As I said, your solution won't work as my view should be drawing dependent as i have some 300 view states for this assembly. The solution I tried is turning on the curve layer just before generating the pdf for the unwrapped view. But once I click the view and becomes independent, ALL the layers becomes unblank. And there are A LOT. So, not a solution. Maybe only if the initial status of some layer is "blank" so when I make the view independent I won't see all the notes that shoudl be invisible.

How about overlaping the views? Could you detail a bit the concept, please. How an alternate origin?

Personally I am not a fan of Creo layers, and certainly with automated "intelligent" layers (rules).

So when I do use them, they are very specific.  In general, these features are blanked in my model and I turn it on specifically for a specific view.  There is a similar shell game to be played with explode states.

View properties has an option to specify the view origin, and you can place a view at a specific location on the sheet.  Therefore, you just need a common feature to align.  Problem is, this "specified origin" does not specifically allow vertex selection.  Hense, I may use a hidden datum point if I get tired of trying to grab the end of a curve/edge by selecting just past it.  I do this to align hidden line views with shaded views w/o edges (there is a reason I have to do this the hard way).

do you want to retain layer status dependency all the time automatically or is the problem the resetting of layer status when you create the independent view?

You can copy the layer status from the drawing after you create the independent view: 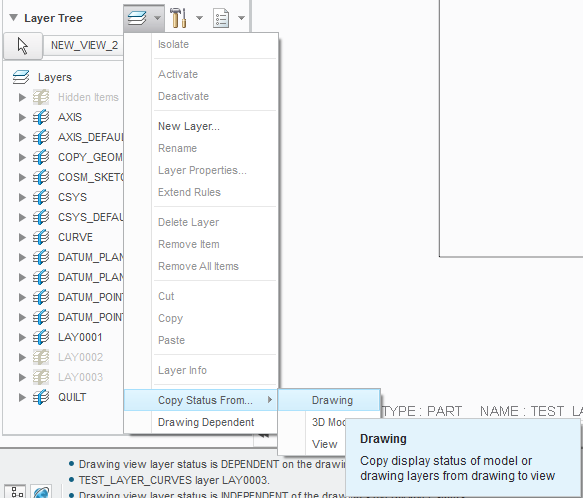 I have to admit I don't quite understand your predicament - because I don't understand this drawing program complication...  Someone else in this thread already suggested the quick way of "making the layer state of an independent view to be the same as the current drawing layer state".  But I can see how that is a static path which means you have to manage layers in multiple places if something changes in the model's layer structure later on.

The overlay idea seems to be what you are after; I wonder if you tried these steps already:

1) create a datum point at the start of your unwrapped curve.

2) create a layer that has only this unwrapped curve on it.

1) In the drawing's layer state, blank the model layer that has the unwrapped curve on it.

2) create the general parent view - this one will presumably have the layer status "dependent" on the drawing.

3) Make another general view - this one will be the overlay - and make it match the orientation of its underlying parent.

3) align the new view to the parent - use the point-point alignment (it's easiest if the point and its datum tag is visible in both views).  You will have to apply the alignment 2 times - once for horizontal and once for the vertical directions.

3) change the drawing layer state for the overlay view to be independent.  blank all layers for this view except the one that has the curve on it.

Done!  Remember to save layer status!

1) View alignment is "temporary" - since you can't have both horizontal and vertical alignments active - so you can easily move one view off of the other but it's also very easy to re-align them since that datum point will already be in the selection box.  Of course, the same goes for the orientation - the overlay will not "follow" the parent's orientation.

3) on my system, the drawing setup options ignore_model_layer_status and draw_layer_overrides_model are set to yes.

4) I'm not sure what having a new view in the drawing will do to your drawing program...

As i said from the beggining is that the easy way doesn't work because the complexity of this preatty easy assembly. More precise, from this:

dependent on the drawing layer 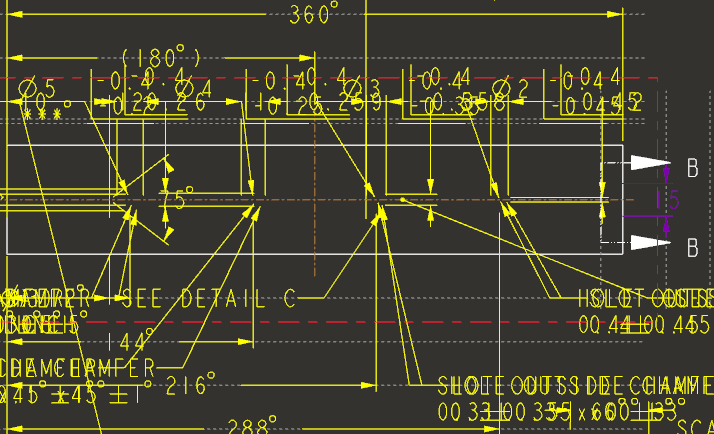 Independent from the drawing layer

The question is: in the step 3-third parantesys- of the drawing procedure: blanking the layers: is it possible to blank the layers ONLY IN THAT VIEW? Otherwise...

I hope I will have time to try this procedure next week, I will let you know if I will

I have three views: two depending on the drawing layers and one, independent of the others two representing the unwrapped cylinder, where my curve should appear. Unfortuantely if I copy the layer from of the two views, my unwrapped view becomes drawing dependent. And if i copy a 3D layer structure it will blanks me other layers that I want them shown. I cannot manualy change those layers because there are more than 100 layers and it will be difficult to undrstand which one is mine.

Manipulating layers in Creo drawings is a very confusing process.

So to clarify, "drawing independent" view has a layer state that can be controlled separately from the drawing's layer state.

"Drawing dependent" views do not have a layer state - their display is governed by the drawing's layer state.

In general, the views that you create are "drawing dependent", unless you go through a procedure to make them "drawing independent".

Please refer to this figure that I copied from an earlier post in this thread: 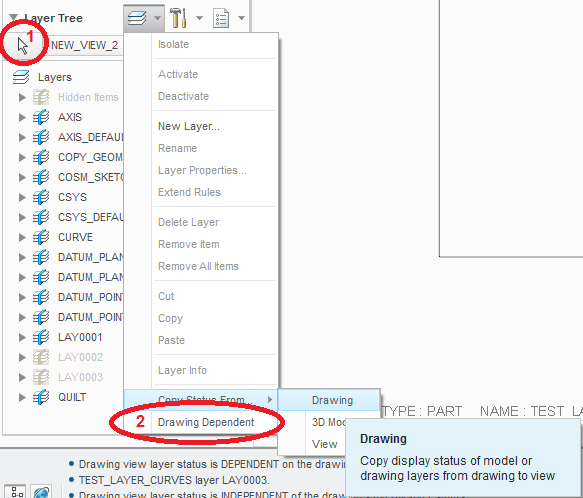 1) using the "arrow" button and selecting a view from the graphics area or from the drawing tree will cause it to become "drawing independent".

Actually, after clicking on this arrow, you can quickly see which views on the current sheet are "drawing independent" based on the color of their view outline ("drawing dependent" views will have a different color)

Another thing is that whenever you turn the view to be "drawing independent", Creo will often unblank all layers in that view (what you illustrated in your last post).

But most importantly, you are indeed free to blank/isolate layers and the state will be preserved just for that view (just remember to save the layer status).

Also shown in the figure is the way for this view to "copy" the layer state of the drawing, model or another view.

Is not possible to have a view dependent and idependent at the same time? 😄

As you can see in my images attached above, when i made the view independent it unblanks a lot of layers which should be blank, Sooooo...

Probably the solution of overlapping to views would be the solution. I will try it if I will have time.

Thank you all for your contribution, It remains "unsolved", for the moment.

???? So... blank the layers that should be blanked in that view.

I suppose I don't really understand where is the problem - and why you think its solution requires the view to be both dependent and independent.  But I suspect that you don't need to use two overlapping views.

Yes, I'm preatty sure you don't understand where is the problem.

Did you see my screen shots earlier? If I have a symbol that is attached to that view and I blank a layer used in a note attached to that symbol it will be blanked also? What if I DON'T want it blanked? There are almost 100 layers.

I suppose i have to manage it differently

Thanks for the help