Cannot Create a Full Round in Extrusion up to Surface

Cannot Create a Full Round in Extrusion up to Surface 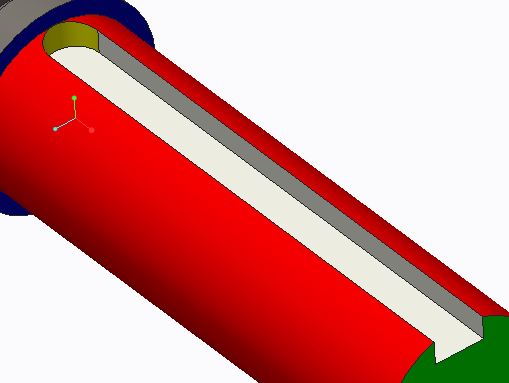 Then I attempted to create a full round, across the white side surfaces tangent to the blue surface.  This failed.  What seems to be the issue is the top transition, but I can't figure out why.  When I change the extrude to a blind value extrusion, and make it end just short of the blue surface, I have no issue, but as soon as the value causes the end of the extrusion to coincide with the blue surface, the transition issue arises.

Has anyone experienced this before?  Were you able to fix the transition issue?

Because the second round you tried to create is NOT a full round from the sounds of it.

The only thing I can think is that in the failed round, the end of the extrusion is much taller than the sides of the extrusion, which is pretty much not the case in the second round.

The alternative is to make the cut from the top down and include the full arc in the section, avoiding what is probably special handling in the full-round function.

‌The error message I get say references for the round transition get redefined. Another solution is to define the extrude the same way you have done but make the feature a surface with capped ends, add the full round to the extrude surface, and solidify using the remove material option.

I wasn't sure what geometry you wanted to create.  I thought you wanted an additional round in another axis, like the slot was ball-end milled.

Create the slot and round first, then revolve or extrude a cut to reduce the OD down to the size shown in red.