What is the best practice for representing lock wire?  In an aerospace application with a large assembly there are several locations where we use lock wire to hold fasteners tight.

I personally don't like using draw entities because any multitude of potential changes often require re-drawing the sketch.

What is the best practice for representing lock wire?

Datum curves in the assembly?

Surfaces in the assembly?

We don't do a lot of lock wire so I may not be the best to answer, but I would not recommend the cabling module. I am not sure just making surfaces is going to help either ... its still a feature to regenerate. Also having parts with no geometry can cause issues because PTC inconveniently decided to leave parts with no geometry off the mass properties report.

If you are worried about large assembly, I would suggest modeling it as a part and then collapse the geometry when you are done. This will give you something to populate your BOM and mass properties but won't regen. Note that if the geometry needs to change though you will have to recreate or manipulate it with the flexible modeling tools.

Thanks for the reply Chris3,

I am not super concerned about the mass properties as it is a tiny fraction of the mass of the whole assembly.  An idea I had was to use a bulk part titled Lock Wire so that I get the smart BOM correct.

Then I wondered if I could make a generic looking lock wire sketch using a custom symbol with a variable length (can't remember if you can do that). Then I'd use the symbol in the drawing to represent the lock wire for all the different components that might require different lengths of lockwire.  The downside is there is no visual clue on the assembly what the lock wire connects to and what orientation it should be installed in.

When you say collapse the geometry when I am done I assume you mean create a shrink wrap ?

Another thought I had on how to do it would be to use just an extruded cylinder between the two parts being lock wired.  Then you could project a skin onto the surface such as a graphic of lock wire.

I'm not familiar with all the appearance options in Creo because we don't have much need for anything other than solid colors and transparent surfaces.  In a home project it was something I managed to do in Sketchup when designing my house and it was easy and low use of resource.

No, I personally dislike shrinkwraps. There are much better options available.

I was suggesting something along the line of what others have suggested. Make a datum curve, sweep a solid feature through it. At that point if you don't want the feature to regenerate you can use the collapse functionality to make it into a dummy solid. This is sort of equivalent to making it a step file except that the surface IDs are retained.

As I mentioned before this makes it into a step like dummy solid that can't be edited except with the flexible modeling tools.

For some things that I don't have modeled, but want in the BOM, I made a dummy.prt with is basically a file with the parameters that I need with a family table. All the parameters are filled out (e.g. "Part" - Instruction sheet, qty, Unit of Measure, ....).

I then add the instance from the family table to my assembly at 0,0,0; pattern it if multiple parts; then the item and its quantity will show up in the BOM. I used this with labels, polybags, bubble mailers, and other misc packaging items.

I would suggest you carefully lay out a path and create curves to sweep.  If it is dimensioned well you can use flexibility modify a single model to fit many configurations (different spacing, different head sizes, etc.)

Something like this.  You could also leave out the sweep and only show the final curve.

There is always more to learn in Creo.
LOCKWIRE.prt.zip
1 Kudo
Reply
Notify Moderator

Here is an improved version in 4.0 with predefined flexibility. 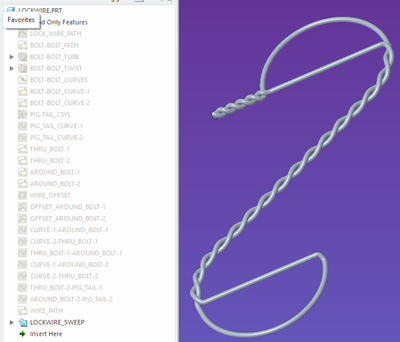 There is always more to learn in Creo.
lockwire.prt.zip
0 Kudos
Reply
Notify Moderator

We use locking wire to prevent fasteners from backing out on a number of assemblies, where two fasteners are somewhat adjacent to each other. We don't model the locking wire for every assembly at present. What was being done was designers were using images of a wire lock, pasting them into their drawings. I found this to be pretty ugly, because they were using photos from catalogs, so the "white" background of the images didn't match and you got a gray rectangle, etc.

To get rid of this I modeled an "example" model of the wire loop; an assembly that shows two representative screws with the twisted wire between them. The difficult thing, as you know, was modeling the wire. I did that by building a set of curves:

(1) Two simple flat curves that lie along the center of the "end loops", the bits that go through the fastener holes.

The "trick" for doing this was defining the twisted curves. For the wire to look right, the curve has to start off and end off tangent to the end loops. The only way I could come up with to do this was to sketch a graph that starts and ends with horizontal lines, and use the evalgraph() function to drive the twist. It's too complicated to describe simply here, but it works like a charm.

I'd imagine if I put a bit more effort into it, I could make that model more generic and useful for different situations (variable length, angle of holes in bolt heads, number of twists, etc.) Perhaps, when I have some time...

What I ended up doing was just creating a single part made from 2 features.  A trajectory curve and a sweep.  It's just straight.  I used the trajpar function to create the twist.

Because they are straight and it is very difficult to assembly I'm planning just to embed them into the nuts (not necessarily through the holes).  They will remain packaged parts in the assembly and will be positioned approximately with the drag handles on the amble component command.

When assembled it is made flexible so that the length can be varied as needed.  I made a relation to relate the number of twists to the length so no matter what flex length someone chooses it will still look the same.

I might evolve it to something more sophisticated  that has elevation changes and curves and an easy way to assemble without being packaged.  It get's exponentially more complicated the more features you add. 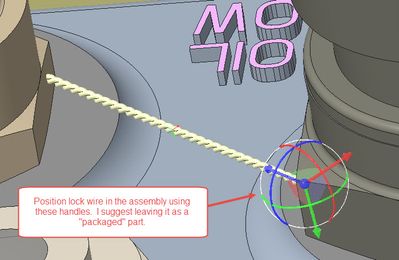 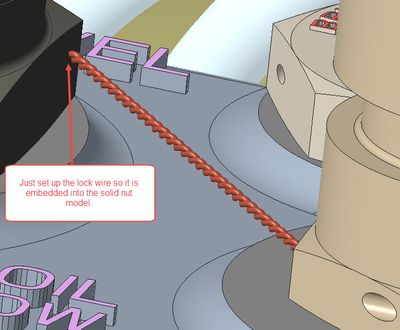 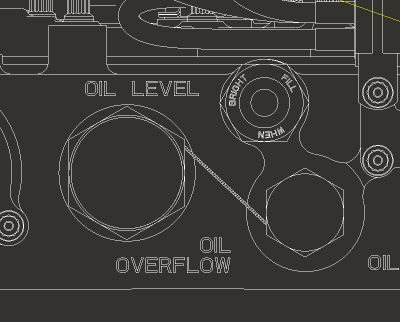 Hello - We suggest using bulk parts which will allow good BOM management without necessarily pulling down the performance of the whole assembly. We have some tools that can help with this, happy to talk further.

email phil.clukies@cadactive.com for more info or DM me here.

We use bulk parts a lot for things like threadlockers, paint, adhesives, etc. It's a fine solution for things you don't see but that are required for the assembly. If there are a number of bulk items used for all the time for different projects, like a "toolkit" of sorts, I've even made a family table of bulk items that serve as the kit and can be copied over to any new project.

The difficulty with things like lock wire and such is you often want to depict what the configuration of the wire is supposed to be (winding direction, where the wire must lie in its installed state, etc.) This can be helpful to the installer as a reference.

Using bulk parts also entails being careful about keeping the quantities correct. If your design changes and now you need double the number of items, the bulk item will not "automatically" update its quantity to reflect the design change like an actual assembled component would. You've got to do some "old school" type bookkeeping.