How to save Solidworks datums turned off in sldprt file so they don't show up in Creo Assembly?

How to save Solidworks datums turned off in sldprt file so they don't show up in Creo Assembly?

How to save Solidworks datum's turned off in .sldprt file so they don't show up in Creo Assembly when you assemble a native Solidworks file that was saved to Windchill using Solidworks and the Windchill Workgroup Manager for Solidworks?

The datum's are saved in Solidworks file with the display off but they show up when opened in Creo.

Anyone that works in a dual CAD environment have any ideas how to save the sldprt files in Solidworks so that the datum's are automatically turned off in the assembly with out using "datum display filters" in Creo or without saving the models using Creo?
Want the Solidworks sldprt datum's that are on layers in Creo to be turned off by default. 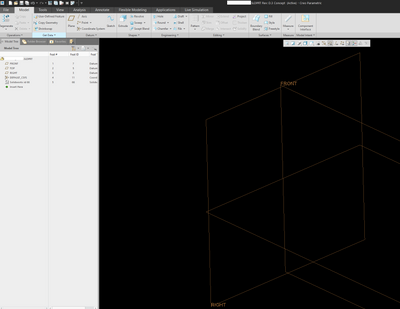 Thanks for any help you can provide!

Would you by chance know if there's a SUP or config setting that would allow for a separate start part template for just import files?

Thanks for the quick reply, I will into that more.  That might be the solutions I'm looking for!

The most recent versions of Creo Parametric use import profiles and there is a config option to point to where these are stored.

Perhaps this config.pro setting will allow you to hide the layers in your solidworks component without having to save the component, because the status will be saved in the top-level assembly:

Though I think that the layers with items have to be present in the component in order to control their display state in this way.