I'm designing a simple stent but it seems that the sketch i put as a hole identifeis a shape. is there a way in creo to set which is a shape and which is a hole? 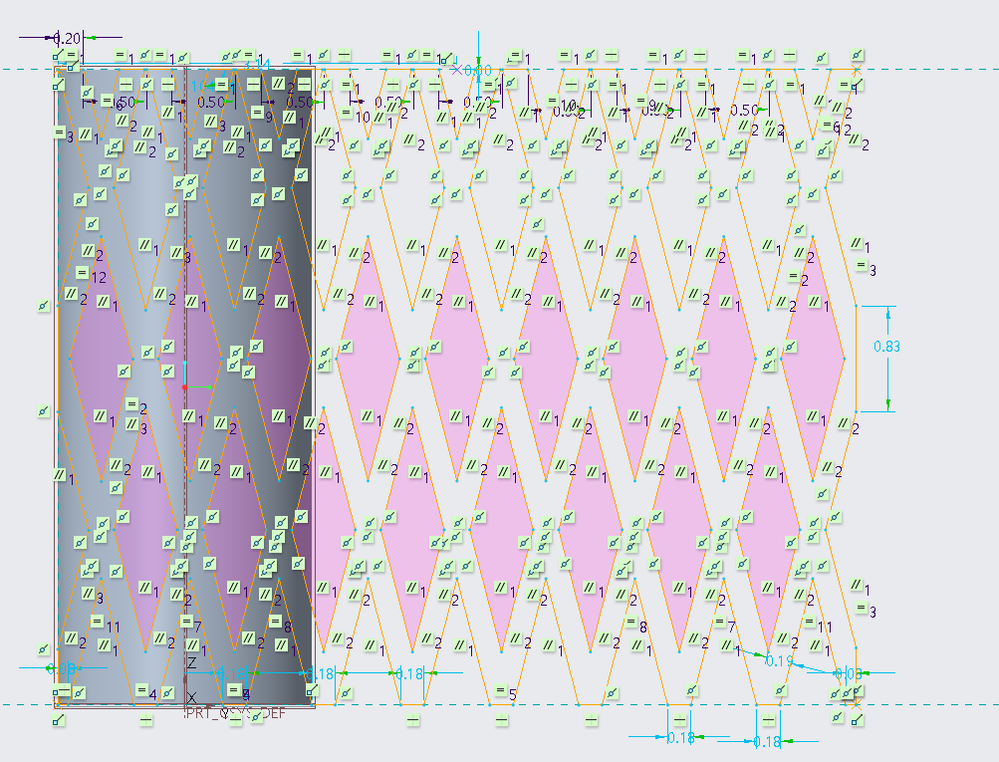 maybe your sketch is not correct -OR- is too complex.

In my test part Extrude 2 feature is set to remove material. Pink color is assigned to removed area (this meas hole).

maybe your sketch is not correct -OR- is too complex.

In my test part Extrude 2 feature is set to remove material. Pink color is assigned to removed area (this meas hole).

I think the problem is in this area of your sketch: 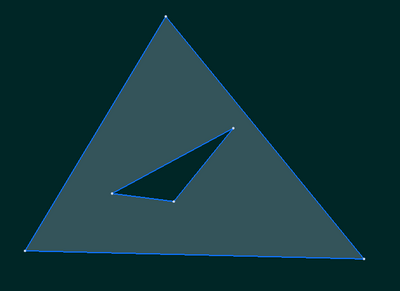 and this does not: 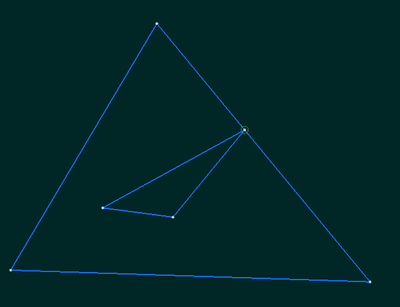 Well then, if they're not connected, then the area marked with "X" not "enclosed", is it? 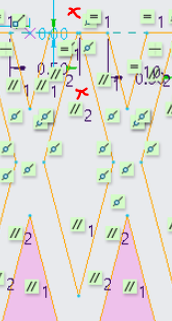 That explains why it isn't shaded...

there is a somewhere in your sketch where the loop isn't closed. 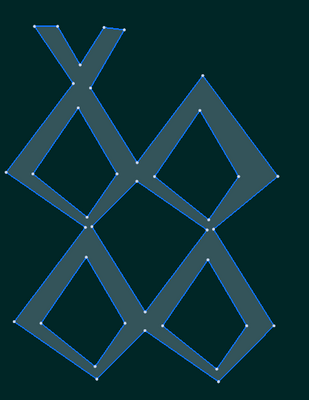 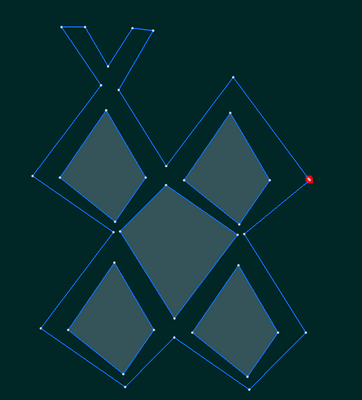 Since I don't see any highlighted-in-red open endpoints, it makes me think that your sketch has a duplicate line which

overlaps another one in the boundary loop, e.g.: 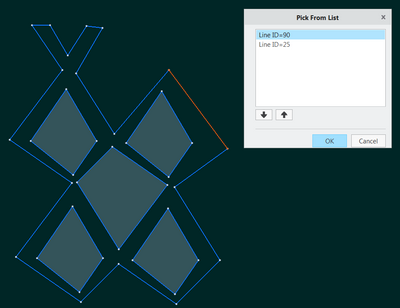 Use the inspect tools to find the problem geometry: 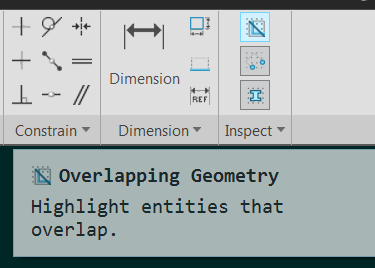 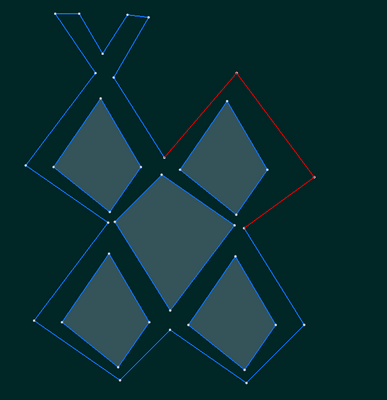 i found that i had a few overlapping lines in blue I erased and placed them again and they still turn out overlapping is there a fix to this?

If you are still using the original sketch, the issue may be what @pausob mentioned earlier.  A point touching an enclosed sketch does not work.  Creo can not determine what should be enclosed.  This sketch does not have any overlapping geometry, but all line are highlighted because of this issue. 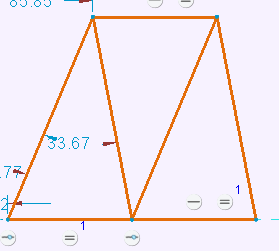 In your sketch it appears that you have erased the wrong line sections across the top and bottom.  The partial diamonds need to be capped for them to be shaded. 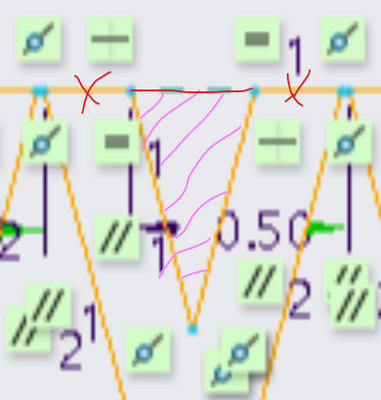 There is always more to learn in Creo.
0 Kudos
Reply
Notify Moderator

Can you save your section and post the .sec file?

Maybe it exposes a Creo software bug, or an issue where the sketch shading algorithm fails if loop vertices get too close?.

That sketch is not a good idea in Creo Parametric. Complex sketches (too many entities) will surely cause issues with your models as you work with them. Multiple simple sketches are almost always better than one complex sketch.

The geometry shown appears that it could be patterned readily.

Interesting challenge.  Here is my quick attempt at creating it with patterns.


There is always more to learn in Creo.
stent.zip
0 Kudos
Reply
Notify Moderator

I created a cylinder surface and made a feature measurement of the circumference.  Then I made a relation to that measurement. 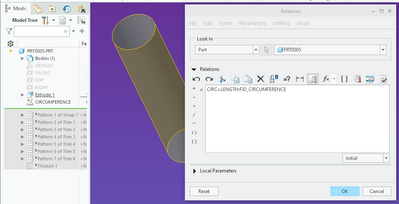 I then made a wrap feature using relations to control the width of the pattern.  I sketched one pattern of diamonds with the distance between centers being the circumference divided by 2 times the number of patterns desired. 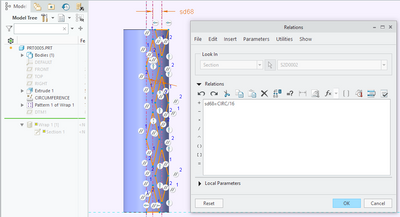 Next I trimmed the cylinder surface by each of the diamonds. 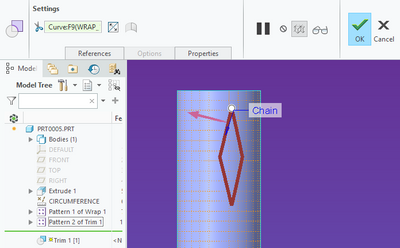 Lastly I thickened the surface. 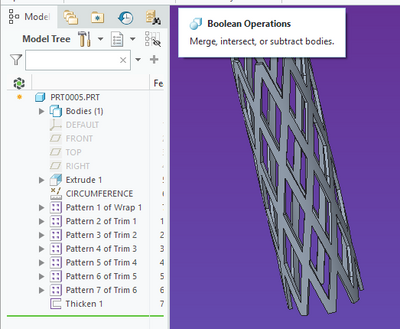 There is always more to learn in Creo.
1 Kudo
Reply
Notify Moderator

I tend to do complicated sketches myself, especially when I'm doing a curve in a skeleton part as a layout for all the parts in an assembly.  For something like this, if this is actually what you want in a single sketch, the best thing to do is mirror the geometry.  It might take several mirrors, but it does simplify things because then the only constraints you have besides the constraints for the original diamonds, are symmetric constraints.  You don't have a ton of parallel, equal, perpendicular constraints etc.  It helps the system out quite a bit.

If you try that, post up your experience.  I'm on Creo 4, so, if you're on a higher version, I'd like to know if the sketcher behavior is the same.

Ok, this was kinda interesting, the first one in a long time besides the colander (that I haven't had time to get to, so, I just spent an hour or so on it.  You can modify the "OD" dimension from 1" to 3" (as shown) and it will actually make the stent shorter, which is what I believe it actually does at installation when you inflate it.  The model is simple and seems pretty robust.  The sketch LOOKS complicated, but as I said, using the mirrors it's actually pretty simple.  It's not going to be perfect, since in Creo you can't "distort" or "stretch" material in the way it does in real life, but it should be very close.  I used a midplane/neutral axis for the spinal bend so that the thicken would cut the distortion in half from that midplane on out to the outer and inner surfaces, it of course could be changed to the outer or inner dia by changing the sketcher relations etc.  I also made the part flexible so that you could change the "OD" dimension at assembly and it would stretch and shorten compared to the static geometry (1" dia and 3" length).  This is a Creo 4 file so pretty much everyone should be able to play with it except for "student edition" users. 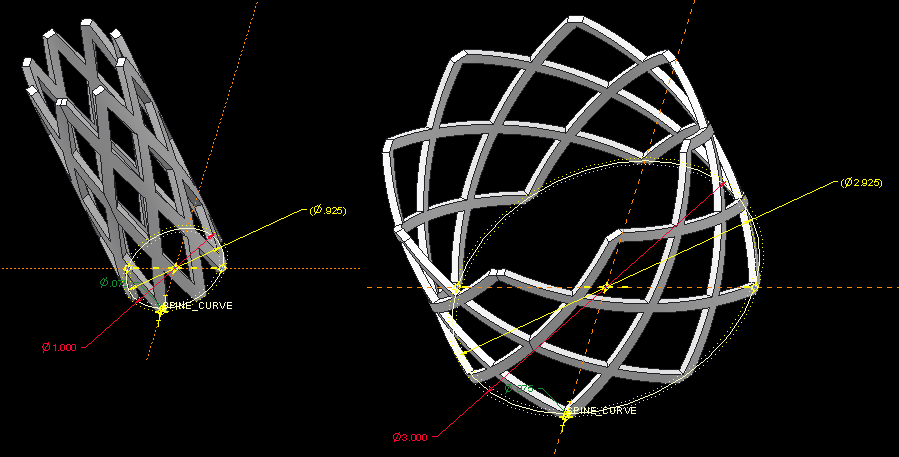 Ok, since I can't edit the comment above to replace the .zip file, I'll re-do it.  It turns out Creo is kinda stupid, and that vertical line in front prevents you from adding a round there, it kinds treats it as a single part, but with 2 co-planar ends.  Retarded.  I looked at doing a Toroidal Bend, but it failed every time.  Honestly, I've NEVER had luck with that feature, dunno how it's actually used (IF it's used).  So, what worked was having to add 2 extra features, splitting the quilt into 2 halves, then re-merging them, right BEFORE the thicken feature.  Stoopid, but now, Creo treats it as a single continuous solid, instead of split.  PTC should fix that so that if you use a spinal bend and the ends are coincident, it at least gives you the option to make it a "loop".  Wheird.  Hate having to add a couple of features that I would consider not needed if Creo joined the ends (like the toroidal bend that didn't work), but whatever.  So, here's the new Creo file.

The split/re-merge technique to "weld" the spinally-bent surface is also a fine work-around that results in neat and tidy geometry  that is easy to manipulate; for example, rounded: 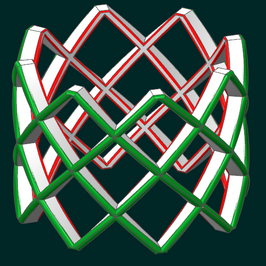 Thanks for posting it.  I'm adding this one to my reference library.

Why, thank you, and glad you enjoyed it!  Hopefully it can help you and/or others in the future.  I was pretty annoyed that the ends of the solid didn't "merge" but, hey, I've been using the Pro/WORKAROUND module for 25+ years, so...  I tried a couple different things (adding a little solid piece there in the 3 split places) that DIDN'T work, so I had to try something else.  Creo REALLY struggled with that split, like it didn't know what to do.  So, I figured splitting the surface and then merging it MIGHT work, and it did.  I had a few other tricks up my sleeve to try if that didn't work, but I liked this a little better as it's a little cleaner.  With the old PC I'm stuck with for now, I tried to add "intent edge" rounds to the 4 inside edges of the diamonds, and man, it REALLY bogged down.  I figure the OP can add them if he wants.  I just picked a nice round number of diamonds (X = 8, Y = 3).  The same technique in the sketcher could be used for however many the user wants, the method is what matters.  I could have done it in "1 diamond" segments with an axis pattern, and made a list of relations for the number of diamonds and different OD to make a full cylinder, but, this was enough to prove the point that it CAN be done.

Hey, we use toroidal bends all the time. It's really useful if you have something you want to define in a "flat" or conveyor transported configuration that needs to be formed on a cylindrical tool. You build the weird shape you want, then use toroidal bend to get the geometry on the drum. It's pretty cool. Niche application, but I can only imagine the math that would need to be done to do the transformation without it.

I don't think toroidal bends like to be done if they're going to form a 360 degree part. No matter what the accuracy is set to, I'll bet it gets all twitchy about it.

Toroidal bends do support 360 wrap with closure. This function is used to design tires as an example.

I tried, and the toriodal bend just didn't work for me.  In fact, I don't know that I've EVER gotten it to actually work over the years.  It's one of those features that I avoid because the interface is such a PITA.  I know that it's SUPPOSED to close the solid, or quilt, but somewhere in the extra thousand menu picks and clicks, something went wrong, and I gave up.  Spinal bends are SO much easier, and so that's what I used.  I had to add 2 extra features (split and merge) but oh well.

Oh, wow, that used to be the only interface to the toroidal bend back in the Pro/E days. At least it's the one I remember. You had to define planes and all sorts of stuff, then adjust (hopefully with relations) to get your target radius/diameter, etc. And, like Frank says, the interface was extremely click-and-fail. We don't ever need a full 360 so I thought that might be why it was not working when people tried.

I wonder if it will work with the current interface - I'll have to try.

Sure seems like a popular thread.  Wonder how many people downloaded my model, considering the minimal amount of feedback...?

Liked the adjustability of the model.  Made me think about how I could incorporate that adjustability into my model.  Haven't taken the time to make the changes to my model yet.

BTW, Ferris is sick and my best friend's sister... 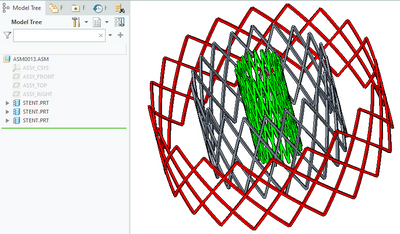 There is always more to learn in Creo.
stent.prt.zip
0 Kudos
Reply
Notify Moderator