Mapkey for all possible "Edit" commands

Mapkey for all possible "Edit" commands

some time ago I created a mapkey to select the command "Edit" for editing for example a feature in a part. It's comfortable, but it would be even more if with it I could also execute the edit for components positioning in assemblies and for internal features of components in assemblies model trees.

Here below (and also attached) a video of what I can/cannot currently do with that mapkey:

(I run it with the a keystroke).

As you can see it gives back error when attempting to run the mapkey within assemblies. I think it's because it had been recorded within a part.

Vice-versa, if I try to record one in an assembly, it doesn't work everywhere. (I suppose it's the selection with right mouse button to be a critical point).

The current mapkey script is this one:

Anyone has already done this, or has an idea on how to write a script that fits all the "edit" cases?

thanks for your reply. I tried it and unfortunately doesn't work...it doesn't do anything.

Anyway, this one works for me (most of the time) for "editing" of features or component placements:

I have tried also yours but it doesn't work either.

Hmm, that's strange - that's as basic as you can get with mapkeys - as it uses the internal ProCmd... function.

I am wondering if anything changes if you copy and paste the contents of the attached file into your config.pro.

Oh, forgot to mention that you should either rename my mapkey or delete your "e" mapkey - as it is, they are in conflict as the "e" mapkey will always execute and "es" will never execute...

thanks for your reply. I tried yours (with the correct name), but works just for edit dimensions of features in parts, as mine currently does, without editing positioning of assemblies or sub-feature in assemblies. Just for curiosity, does it work for these too in your machine? Cause if yes maybe the problem is my version of Creo.

Yes, this mapkey works to edit the position of components in an assembly.  By that I mean editing positions of components assembled with a "distance" or "angle-offset" type of constraint, or the mechanism type of joint connections with the "regeneration value" enabled.  Selecting such components and typing "es" will display the relevant dimensions (sometimes these dimensions are way off-screen and I have to "zoom-out" to see them, but that's a different quirk

I have to correct my reply to your mapkey, yours does the same as Paul's, so it works for editing features in parts but not for components positioning or sub-features in assemblies.

As Paul described above, the mapkey I created also allows me to edit both component locations and feature dimensions.  This is using Creo 3.0 M120.

I don't like mapkeys created with RMB, they don't work most of the times. I prefer to click on a button and see what is the specific command for that. In this case, there wasn't any button, so I used the "search command" tool and searched for "Edit Dimensions". Repeat this in part end assembly environment and join the two commands. If you need this in other modules (drawing, manufacturing, mechanism, etc..) the command may be another.

Thanks for your reply. I also don't like to use RMB, that mapkey had been recorded like that because indeed there is no icon command for Edit, at that time the only way was to RC at that time.

And yes it's certainly better to copy-paste just the minimum and general commands in strings.

Anyway, I tried it and also yours works just for features in parts, not in components positioning and sub-features in assys. If you say it works on the 3, I will have it working when we update to it then.

Strange, I haven't Creo 2 installed so I can't test it, but it should work also on Creo 2. If Creo changes so much between releases we would need to recreate all one by one from the scratch.

Do as I said, record a mapkey calling the command from the search bar: 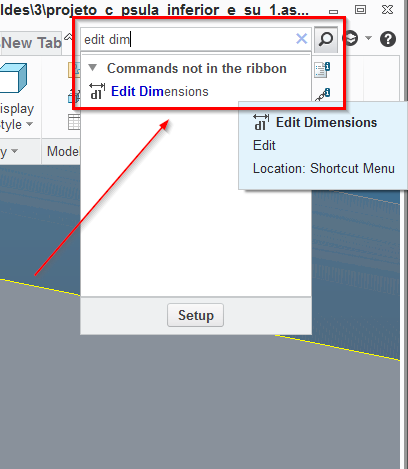 do the same in assembly and join the two mapkeys.

I tried to to what you said, but I don't have any command for edit components positioning, the only available edit is clickable from RMB click on the component (in the graphic area or in the model tree). So I tried to record this command and the string I see in the mapkey script is:

So I fear that by joining this script with the "ProCmdL05Edit" the mapkey is unstable, as for features it will go to the model tree and select some random feature dimension. Maybe is because of the version 2.0 of Parametric...

Yes, maybe in Creo 2.0 is different, I have no way to check it out.

As you can see on the image, If I type something in the command search like "edit dim" the command appears...

Maybe type just "edit" and scroll down through the suggested commands to see if you can locate it.

It's hard to tell without having it installed.

yes, unfortunately on the 2.0 there is no way to find the command on the search bar, it's just a RMB option...