Ref. Dim linked to a surface no longer existing. How to erase non existing ref

Ref. Dim linked to a surface no longer existing. How to erase non existing ref

Having huge problems with a ref dim created in assembly mode, Plane/plane.
9 hour and still counting.

The problem is that the ref dim does not really exist any more, but it still causes problems. It can not be seen in the model tree. No relations or parameter are connected to the dim  And the plane it is supposed to be attached to does no longer exist because the component are not in the model any more.
But the dim sure is there somewhere hidden in the code.

Have tried to erase it in the "reference viewer" but the option is not there.

How do I erase a missing model or a missing dimension. Or is there at way to clean an assembly file from any broken references. Something like "cleanup drawing dependencies" but for assemblys ? 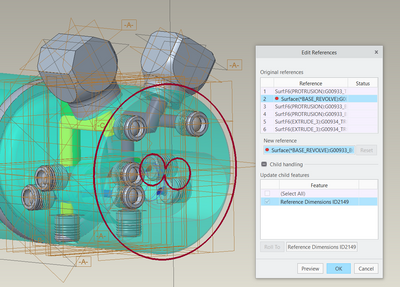 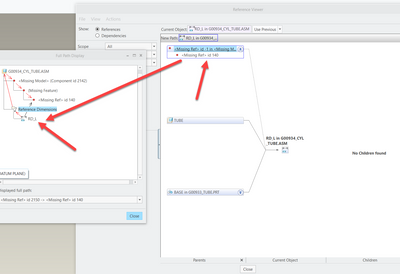 Can you see it in the Detail Tree when you select the Annotate tab?


There is always more to learn in Creo.

Have you tried to save a backup of the model and open it? Sounds stupid but it already helped me with a broken assembly.

Yes I could probably share the file if I can clean some customer specifics first. And erasing all familytables.

So is the Question still open? Just asking because you marked kdirths answer as solution.

This may work for a reference dimension. It definitely works for lost feature references when an external ref goes missing.

These instruction are based on your GRV snapshots which show a single missing surface, it may be more  complicated but this general approach will work but you will need to provide refs in the new model for step 2 as required to fix the lost refs in the top level assmbly.

1) Use the global reference viewer to get the full path of the missing part in the assembly where the ref dimension resides. Make a note of the file name of the missing component.

2) Create a part and name it using the name obtained in step 1. Use a start part with default planes for this.

3) Assemble (by default) the part from step 2 to the assembly top level assembly.

4) Move the part as high in the assembly model tree as is allowed.

5) Attempt to reroute the refs of the failed ref dim, if that fails try to redefine it and use a datum plane ref in the newly added component of the same name. If it will not reroute to a plane you can add a surface to the new component model and retry.

6) If this results in the ref dim regenerating then you should be able to delete it. 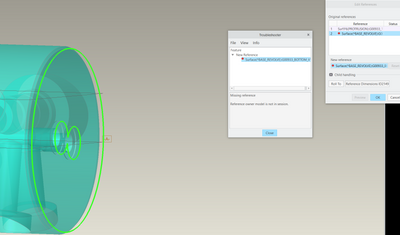 I have reinserted the part that had the surface it is looking for. Trying to reattach the dim to the same surface as you describe.
But no success. No surfaces can be selected, have moved the part high up in the tree but still nothing can be selected or erased?
Is still says that the model is missing.

The option of erasing this and making it again from scratch is not an option. Its unfortunately already included in
several assemblys.

Can you see it in the Detail Tree when you select the Annotate tab?


There is always more to learn in Creo.
1 Kudo
Reply
Notify Moderator

No the annotation tab is empty.