The "Edit Position" in Explode mode is disabled, how to unlock it?

The "Edit Position" in Explode mode is disabled, how to unlock it?

I am making some Exploded Views (using two computers side by side. I have 6 CREO licenses at any time in this year). At one computer I can make the exploded views, at the other computer I can't move any part in Explode mode.

How to make the parts free to move? Where is the "lock" switch? Why need to have this "disable/lock" function in Explode mode? (I guess I can answer my 3rd question as: for security reason to prevent unauthorized edition.

Have a wonderful day.

It should be a glitch. There is no solution.

Not enough information provided to root cause this issue. Are the same config options identical in each session; one of many questions that could be relevant.

It was not working at one CREO session, so I saved the assembly (of only twenty components) and opened it at another computer, then It worked.

The issue is like this: in Edit Position, when I picked and dragged any of the three arrows (see below illustration), the component didn't move at all, worse than in another scenario several days ago, in which I could move the component, however, the relocated component would spring back immediately to its original position once I released the "pick". 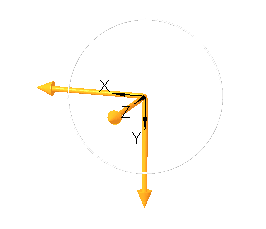 (So much fun with CREO. CREO can really help in finding out who the best players are, similar to those touchstones: SAT, GRE, GMAT, etc.)

Agreeing with @tbraxton we need more information about the failing workstation.

how is the model stored? on a shared map drive? windchill?

Do you have two separate copies of the same model on each workstation?

Do you try moving the component with the model opened simultaneously on both workstations?

All in all, the good news is that you have workstation that works and another that doesn't. Compare everything you and by elimination you will find the gap.

It should be a glitch associated with this particular computer (128G RAM). I saved a backup of the model from the best computer and opened it at another computer with no issue. Right now there is no issue.

BTW, this particular computer has been always associated with some glitches that have failed vibration simulations for many times. (i.e. computer was jammed and Simulate had no response. The msengine.exe took more than 99.9% CPU and jammed there).

It should be a glitch. There is no solution.