I need to create text on a surface. Simple enough, but the text needs to be like this:

I could create each letter individually, then align them and space them to make it look okay, but is there a more elegant solution? In short, is there a way to create a text string that is vertical but has the letters oriented in the "normal" way?

Also, oddly enough, if you use the ISOFONT, the capital "I" is not centered on the letter. The text geometry is offset a bit to the right side. Weird.

That's never been possible at least up through Creo2. Not sure it 3 has that.

Think this is "the best solution".

What I ended up doing to get the desired effect and ability to adjust things is the following:

(1) Sketch a centerline along which the letters will be aligned.

(2) Place a bunch of equal diameter construction circles along the centerline, one for each letter.

(3) Make each of the circles tangent to its adjacent neighbor.

(4) Create each letter of the expression as a separate text entity, with center and middle alignment. Make sure the size of each letter is defined as equal to the first letter, so you can change the size of all of them with one dimension change.

(5) Make each letter of text coincident with the center of a construction circle.

This way, I can play around with the diameter of the construction circles to adjust spacing of the letters, and it looks really nice. It's not very efficient, but gets the job done.

For the annoying "I" (capital "i") problem, I just put a vertical line in place of a letter as needed, and it looks great.

Attached is a picture of the a bit of the sketch for the feature. 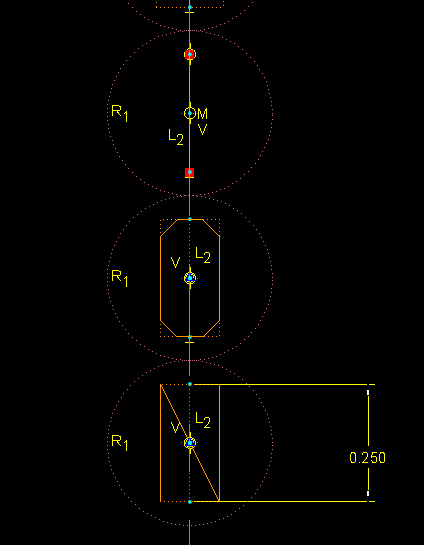 More work than necessary, but effective.

How is it "more work than necessary"?

I can't believe that they're missing this basic text creation functionality in such an advanced software.

tongue in cheek reply--- That is your mistake, assuming this is 'advanced software'!

Ben, after all this time you're still a UG/NX guy at heart aren't you.

Kelley, I still have more years on UG/NX than PTC products and been using PTC since 2001 with a little break plus some doubled years when I supported both.

Just to put things in perspective, what's being described is not a "vertical text". A vertical text is normal text rotated 90 degrees. 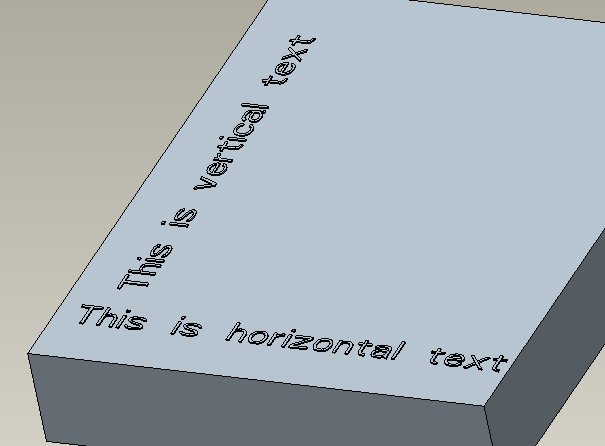 This is Vertical Text! 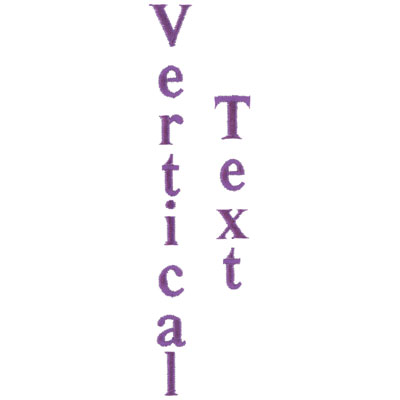 Yeah, if you search on "vertical text" you get a lot of illustrations, many of which display just the very thing Ben shows. Besides, this is just semantics. I was perfectly clear in my initial inquiry as to what I was looking for.

This is a little hoaky because there are extra steps. But, you can create curves from a dxf or iges file. The step in creating the iges is to create a note in a drawing, probably A sized. Then, use the drag handles on the note to make the text vertical and save as an iges file. When creating the curve, use get data. Using the iges, it will come in as scalable, placeable text in the font used for the drawing text.

I'm a little late to the party, but you could also control this with a parameter, some relations, and a pattern. Example attached.

Basically, you create a parameter for your text string. Then add a point to your sketch that you can use to increment a counter and use a relation inside of the sketch to define which character of the text string parameter to use. Pattern the sketch (you need to pattern the point "counter" dimension and the location dimension of the text). Finally, use a relation at the part level to tie the number of instances in the pattern to the length of your string (or manually keep them in sync). Probably easier to look at the example...

I like this because it puts all the work into the creation of the thing, up front, and makes it easy to modify the text string if the need arises. Presumably it would also work with a cosmetic groove, which I use to do engraving. I'd just have to pick a whole bunch of the features to do the engrave, but that's not unusual.

Thanks for your idea

I am not able to open your vertical text part, Its showing mw that it cannot be retrieved.

What version of Creo did you complete this in?

I am using Creo 3.0 and cannot replicate your actions. I can only get the sketch value to remain the same.

So, I'm gonna suggest something REALLY radical (but potentially extremely simple with the work dine up front):

Why not create a font where the characters are rotated either 90deg CW or 90deg CCW?  I don't know how to do fonts, BUT it should be possible, if not easy.  Then you can simply orient the text how you want, and manually type it in or use a parameter.  No muss, no fuss, no bother.