replace color of a part is not possible?

replace color of a part is not possible?

I would like to make copies of an imported part and only change one color.

However if I modify the color of the copied part, the same color in the original part also changes..

I do not want to simply want to repaint the whole part with a new color by selecting all surfaces because its a complex part with different colors on a lot of surfaces. 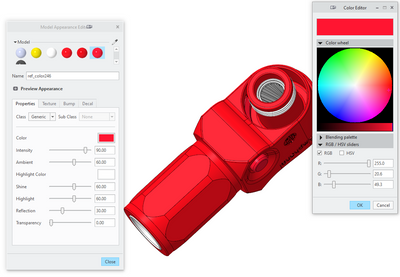 Anyway, besides your RMB + select objects method, the "new" option is also available to try to decouple the new part's appearance from that of its source:

Are you saving a copy of the referenced part using a unique part name (using save as) or are you copying the component within assembly mode and placing it with multiple instances in one assembly?

If the copied part has a unique name and does not have a dependency to the "reference" model then you should be able to alter the colors on any/all surfaces in the copied part without altering the reference part.

If you are not making multiple uniquely named parts then you could create a quilt consisting of all solid surfaces and apply colors to this quilt/surfaces to get a different color scheme.

In Creo 7+ part level simplified reps are supported and surfaces are one option supported for these. This would enable multiple quilts with color maps to be defined in a single part then displayed using simplified rep functionality.

Instead of modifying the color, RMB on existing color, click on Select Objects, and apply new color.

Anyway, besides your RMB + select objects method, the "new" option is also available to try to decouple the new part's appearance from that of its source:

My understanding of the colors is that the library is used to get an appearance to apply to a model. Once you have applied it to the model and saved that part, that's the appearance it will have. There's no link to the library of appearances.

For example, let's say I change the appearance of a part to be hilite-red, then saved it. It now appears as a metallic part with red highlights. I close Creo, then edit the appearance definition for hilite-red to make it purple, by adding a blue component to its color. When I restart Creo and load in the part, it still looks red.

When we set a part's appearance with a library entry, the colors from the library are applied to the part. There is *not* a link set to make the part reload the library appearance whenever it is opened. Makes sense, if you're getting parts from a collaborator with a bunch of customized colors that they defined, it would be annoying to have everything default back to the grey modeling clay appearance because you don't have those appearances defined in *your* library.

Changes to library appearances are only used for new applications of those appearances, it doesn't affect parts they were used on before. There is no connection that I can see between the library color and the part.

Yes, I think I see that's how it should work.  Also when you copy a part and edit the color of this new copy, you wouldn't expect the source to also alter its appearance.

The strange thing is what the OP describes: you save-as-copy a part, then you open the copy, and then edit the appearance of the material in the copy.  Let's say you had the material called "green" and you edited it to appear red.

You then open the original part from session, and then you see that it still has the "green" material but it looks red??

So there is somehow a link (it goes both ways) between the two the colors/parts.

Note that this link seems to disappear if after save-as operation you then close the files and erase the memory and then re-open the two parts.