I'm trying to get to grips with MathCad Prime, I'm using my old college notes and trying to recreate the solutions to example problems in Mathcad as a way of learning the tool.

I'm struggling with the below 'kind' of problem. I used to love working in this kind of notation, i.e. dot-derivatives, unit vectors, etc. makes it quick and easy on paper.

I'm wondering what are the best techniques in Mathcad to use to recreate this solution approach in mathcad and work through the problem?

i, j, k are unit vectors in x, y an z directions, gamma(dot) is a rotational velocity or derivative of gamma which is the rotation angle. 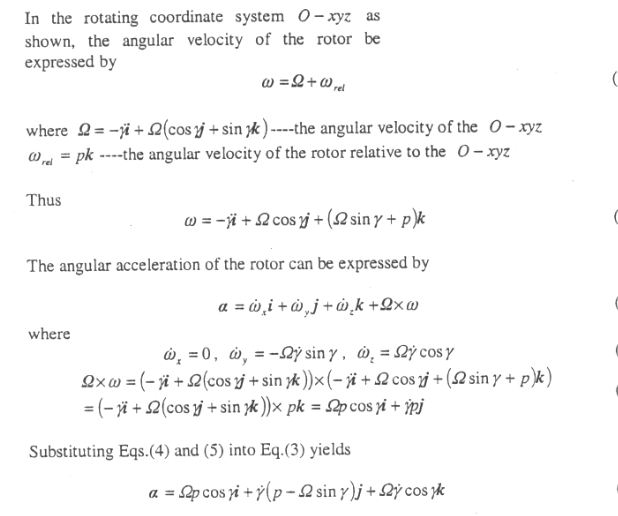 More or less, you can do something like this:

(I apologize for the errors and omissions that I hope,  will be referred to me.)

Since with j and i, I indicate the imaginary unit, to define the unit vectors in Cartesian coordinates, I opted for ix, iy iz.

Is there any significance in the difference in formatting between your different variables? i.e. the ix is bold red, U is bold blue. When I write it out in Mathcad prime, they are just normal black.

In Mathcad 15 (and at least back to Mathcad 2000), you could assign a Math Style to a variable.   You could specifiy the font, colour and the common attibutes (bold, italic) to for the style.  The default style for variables is, for some reason that escapes me, called "Variables".   Mathcad regards a variable with a style as being different variable, which is quite useful when, for example, you wish to distinguish between a vector/matrix and a scalar..

There are 7 "User" Math Styles, which you can define (and rename) via the Menu Format/Equation.  Here's an example of modifying the User 3 Math Style. 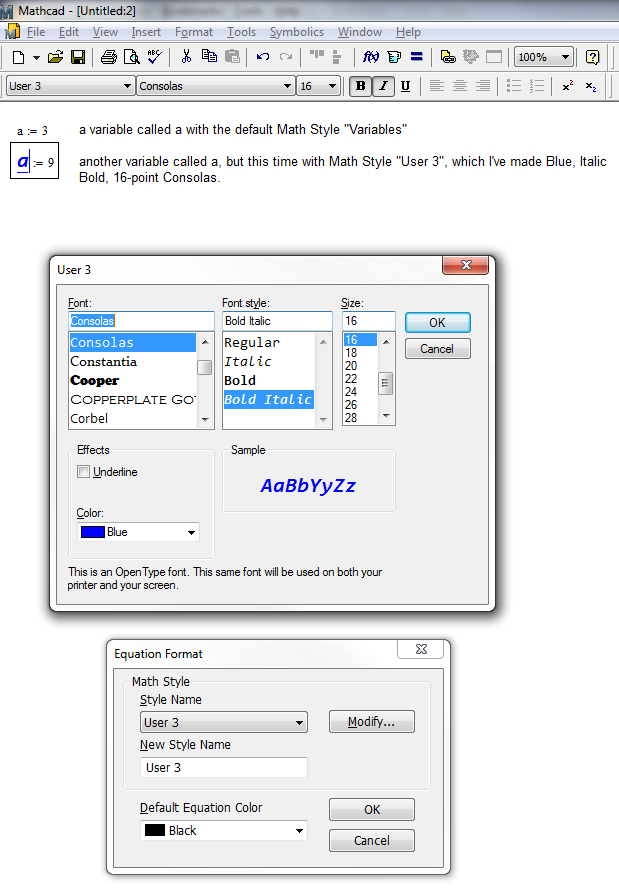 If you name your Math Styles suitably, it can be quite quick to apply them using the key sequence Alt-o, enter, <style letter>, enter.   For example, on my standard Normal template, I've given them names that start with a letter of the alphabet, so I just type Alt-o,enter,d,enter to pick my "D Style (User 4 style)".

Unfortunately, Mathcad Prime's equivalent, whilst smarter in some respects (eg, it's unit aware) isn't quite as flexible.

If two objects or two physical-mathematical entities, have the same name but formatted differently, in the same worksheet or one in a worksheet and the other in another worksheet, they are not considered equal. Obviously all the worksheets must use the same references.

Among the entities or objects used in various worksheets there must be a biunique correspondence, otherwise nothing works.

Constants and variables defined in a worksheet or in a reference, can not be redefined in another worksheet employing the same references. If you do not respect this rule, you have a high slow down, or the calculation block.

It is impossible to realize with mathcad Prime.

I apologize, lack of parentheses in an expression, so I do not have a correct result.

I add a new photo with the correction.

You can make a comparison with the list of vector identities that you find in the appendix of any serious text.