You pretty much nailed.

Communities are PTC-administered and are product and service focused.

You pretty much nailed.

Communities are PTC-administered and are product and service focused.

Where do I find those groups vs communities?

Is it meant that "Mathcad" is a community and "Electrical Engeneering" is a group which a user had generated? Anybody can create that kind of subgroup? Not that I intend to do so.

I find that forum really confusing and hard to navigate. Would like to have a tree view of the threads and the possibility to collapse threads resp. subthreads in a thread.

BTW, how can I customize my startscreen in this forum. I have it set to PTC Community->Mathcad and the tab overview. I would like to get rid of that "Featured Worksheet" and the "Hero of the month" which clutter the page, bug me and I am forced to scroll down every time I open that page to see "whats going on". Rearranging areas to bring "whats going on" to the top would do the job, too. I remember at the beginning, when PTC turned off the old collab (which I still mourn) there was a way to get rid of those widgets but I cannot find the way to do so now.

No, Electrical Engineering is a community, not a group. To see the groups, click on Browse > Groups.

To change your view, click on the "personalize" portion of the "Your View" tab. There you can select content and set your layout. I have two areas that follow content for tags and a main area that follows new content for multiple communities. Also my groups and communities have ready links on the site.

Thank for the reply.

I don't have that "personalize" tab when I am in PTC_Community->Mathcad. I only see it when I am on "top" of all communities, that is, when I browse to http://communities.ptc.com

I'm not interested in creo stuff and I dont want to bookmark that page just to jump over everytime from there to where I really want. At the time being I have bookmarked the Mathcad section and the only thing I was able to customize there was the standard tab. I would like to keep that bookmark but get rid of all that unnecessary (from my point of view) stuff.

When you click on "personalize" in the Your View" tab, you can build a home sheet that will open when you log in to the community. Here is a snip of my page. 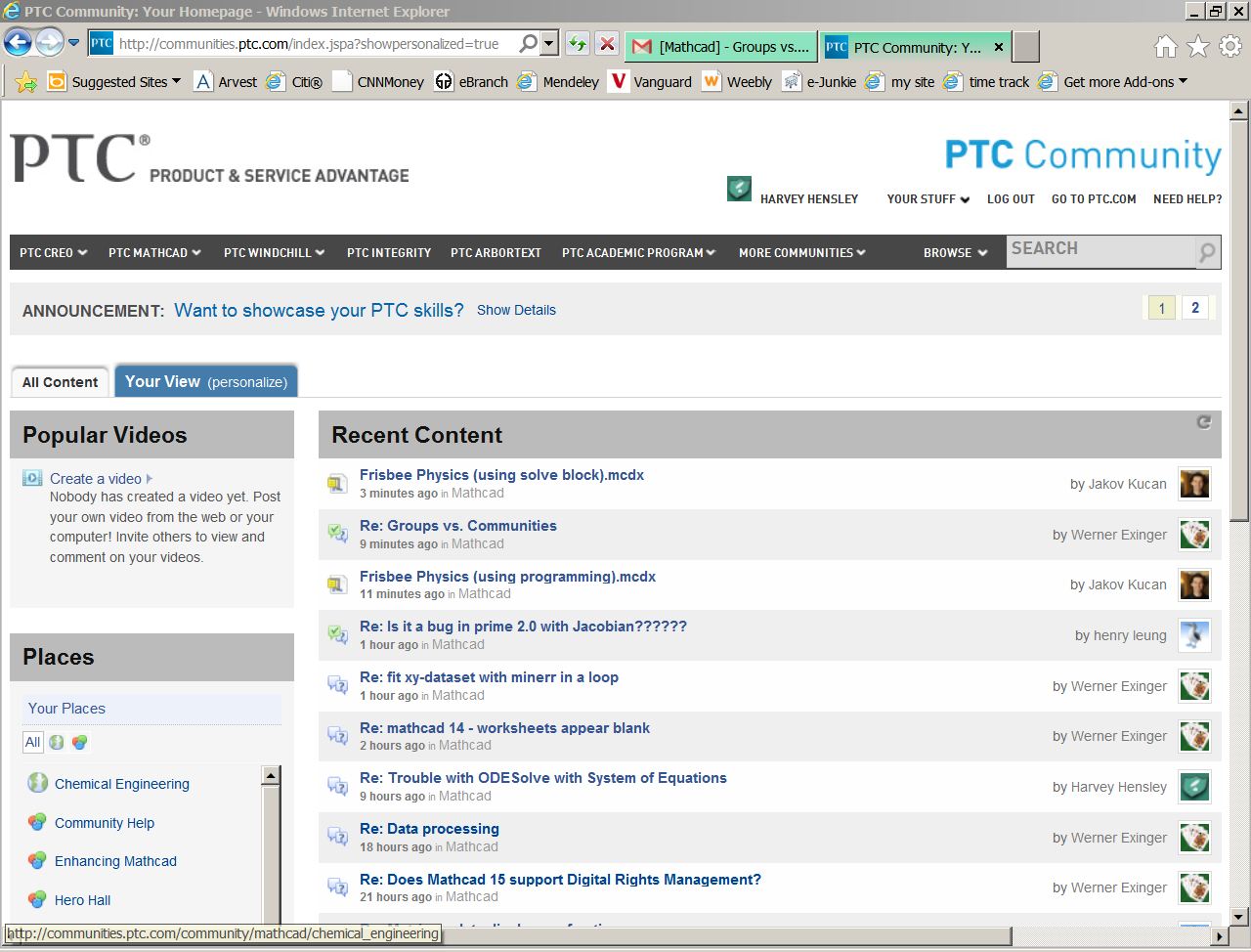 As you can see by the scroll bars, there is more info below.

Once I have created this page, then I can return to it at any time by clicking on the large PTC icon at the upper left corner of any page.

If you can see the personalize link, don't worry about where it is. You are going to create a page of what you want to see, not just what is present in the current tab.

Looks good for me, but how do you restrict that "recent content to the area Mathcad. I just gave it a quick try and got all messages, including those of other forums like creo etc.

Once you have selected "Recent Content" as an area, then click on the little down arrow on the right of the Recent Content header and then click on "Edit this widget". In the new window, select Yes for "Limit to your places". The places you are following are set on your profile page (maybe they can be set here also). So if you want just Mathcad, set it as a place you follow. In my case, my Recent Content picks up posts for Mathcad, Chemical Engineering, and two groups.

Thanks alot Harvey for your support. I was just about to edit my prior posting as I found it myself that widgets can be edited.

You are certainly welcome, Werner. Don't forget the follow a tag option. It might pick up something on a special topic that is not in one of your followed spaces. I say "might" because not everyone uses tags.

Yes, people like me don't - I'm not used to. Still believing in folders and subfolders, and .....

No, I have no experience with all of that. I never "followed" or "joined" or did anything like that. I just walked around, left and came back if I thought it was worth the effort. I must confess that I dislike very much this heavy social network touch of that forum as on the other side we have a clutterd and hard to navigate structure of groups, communities or whatever one may call it. I really miss basic feature like a tree view, callapsing views and of course the marker of a post as already being read by me or new (to me, not in general) - I miss those tiny red flags of the old collab. Navigation was so quick there with that tree or the filter which only showed messages still not read by you. But enough ranted for now - it doen't help. We won't get our old collab back and it looked that the implemenation of that PTC communities was quite a low budget production using software out of the box. At least PTC was not able to move the collab over to here, at least they failed in great parts (broken links, missing attachments, posts in disorder,...). Would guess that this would not have been that difficult a task for a group of decent programmers.

I never used the old collab even though I've had Mathcad since about version 2.5. Therefore I can't compare it with the new community. However, one suggestion might help you. If you view your recent activity from Your Stuff on your page, the discussions with unread content will be in bold. That is not true if you just go to an area directly, say to Mechanical Engineering.

See below a screenshot how the old collab looked like. While oldfashioned the tree on the left allowed for very quick and efficient navigation. You were allowed to open as many subareas as you like without the other collapsing. Unread posts were flagged by a small red flag (you dont see any here) or you could filter so only new (to you) post are shown. No fancy byplay - just what you needed. On the other hand: no inline pics and a search function which sometimes behavied rather strange. Nevertheless - Iliked it - especially compared to the PTC communities.

Tnx, I didn't know this. Until shortly I followed no group whatsoever - that way I guess I couldn't see that effect. When I was following the Mathcad groups I found it very annoying that I could not just say follow Mathcad and all Subgroups. I had to chose each of the (12 or more) subgroups (or are these called areas, or communities, or ...? Who cares?!) and had to follow each one separately. I will look out for the bold, but I guess there is no filtering which shows me only the posts I haven't read so far.

See below. That tree shows very clear and well-arranged the structure of a Forum or a single thread. I had often wished in the new forum to be able to command to collapse all posting and show the header line with date, poster, etc. only. Sometimes subthreads are developing and its very easy to miss a posting in the middle if the newest posting is an answer to a message below.

No, that's what I realized, too. I joined (followed, whatever) Mathcad and realized after a while I was missing quite some posts - the subgroups. So I had to join every single one of them.

One other thing which is irritating is that when I customize my page with the widget to she me the ltest postings in the groups I am subscribed to, I can chose how many postings I want to see but if I want to go back further - no way, no scrolling, nothing. The number of post you have chosen but nothing else. That's bad. 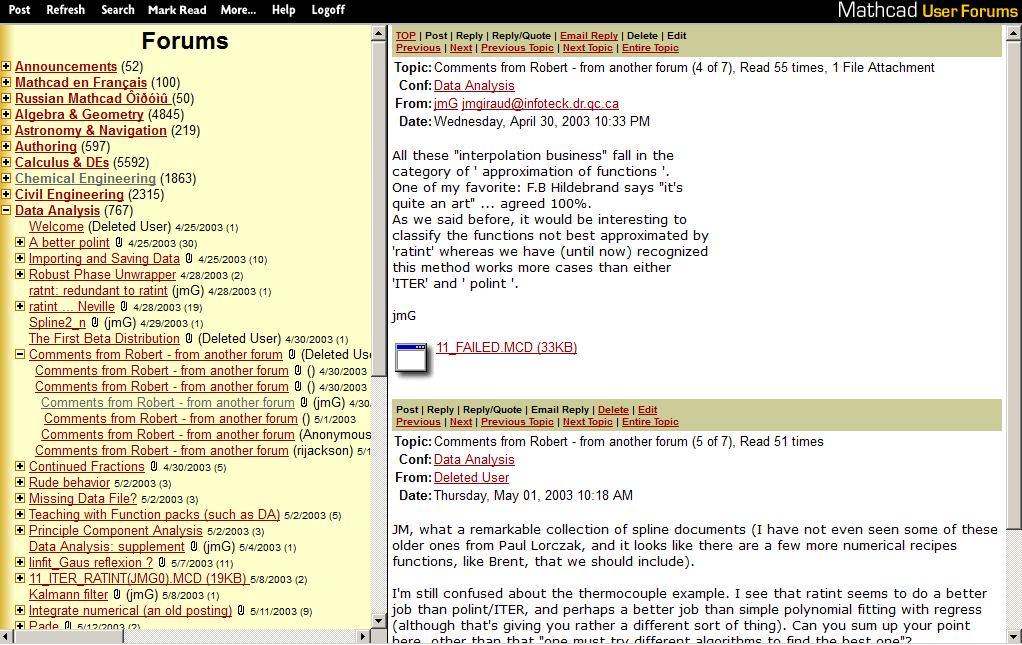 It wiil be better to have Groups IN Communities.