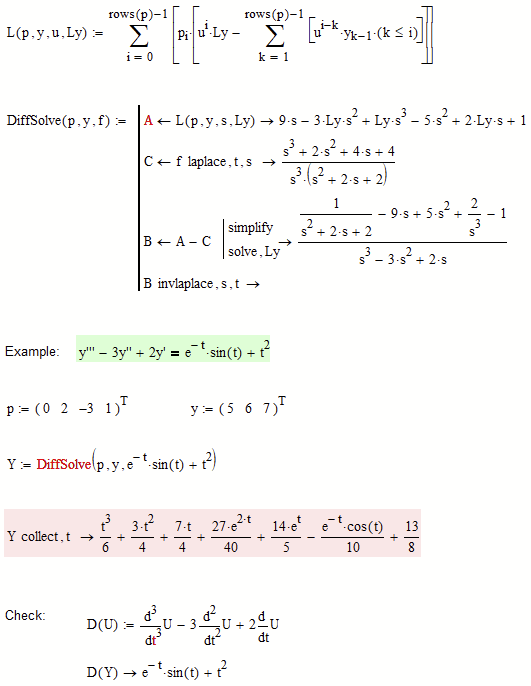 Unfortunately Mathcad does not provide any means to solve and ODE symbolically.
Best advice would have been to use Laplace which could be automated in older Mathcad versions MC11) but not in the current ones (neither in Mathcad 15 nor in Prime).

For symbolic solutions you will have to resort to programs like Maple or Mathematica.

Sure not the only solution, but Laplace seems to be the easiest way in many cases. But of course you could also solve the ODE(s) manually by integration and let Mathcad do the basic integration work.
Anyway, I don't know of a way to fully automatically get the symbolic solution for an ODE or a system of ODEs with Mathcad.

A long time ago I played around with the idea of writing functions to solve ODEs automatically in Mathcad using integration, but I only finished /to some part) linear first order ODEs and never took time to extend the method at least to second order ODEs (which I guess should be possible), let alone systems of ODEs.

As far as I remember, it was particularly tricky to find a way to use arbitrary names for the independent variable so as not to be set to just x or t.

In case you are interested and like to work along I attach the file. The comments mostly are in German but I guess you'll get the idea how to use the functions.

BTW - as the functions require symbolic evaluation inside of a program, they will not work in Prime any more.

I found in a book this way (function) of the implementation of Laplace Transform for a differential equation, but I encountered some errors...and I don't know how to fix them for this moment.

If you have any idea of how can resolve these issues...are welcome.

Mathcad (at least the version we use) does not understand a function "solve" or a function "laplace".

In Mathcad 15 "solve" and "laplace" are keywords for symbolic evaluation but not stand alone functions.

What your book shows may work in Mathcad 11 (Luc could verify). You remember that I wrote in my fist answer here that solving an ODE via laplace could be automated in MC11 (which uses Maple for symbolics), but not in later versions like MC14 or MC15, which use a different symbolic engine (muPad).

The very first error that your file shows is due to you. If you follow the notation of professor Birkeland carefully, you'll see that he writes an equation (using =), not a definition (using :=).

Such an equation can be, and often is, used to describe a mathematical concept in a notation that escapes Mathcad's error checking.

The book was written for Mathcad 2000, a predecessor of Mathcad 15. With the change of symbolic processor going from Maple (unitil Mathcad 13) to Mupad (as of Mathcad 14), many symbolic possibilities were broken, a few were improved.

I'll see if I can make Birkeland's functions work in Mathcad 11.

Given the right version of Mathcad (11), and some tweaking:

But all this is unsupported.

In Mathcad 11 the construct with k<=i fails. As soon as I put that in, the function L forgets about the initial conditions, they're all set to 0.

Since its use is to limit k from going above i, this can also be accomplished by the upper limit of the inner summation. I also observed that the L function is not ORIGIN aware.

It appears that I can compact the DiffSolve function to a oneliner. 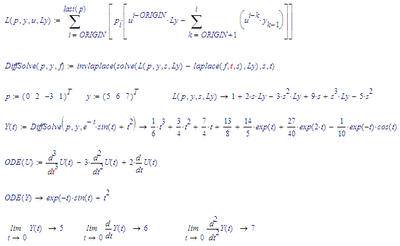 The one liner sure is possible only in MC11 but not in MC15.

The construct with *(k<=i) is necessary in MC15. I am not sure why, but the symbolic in MC15 seems not to like the "i" as an upper limit of the second sum.

The error message when trying to symbolically evaluating L(..) is "assumption impossible (property::Null)" ????

Otherwise your implementation would sure be more elegant and preferable. And yes, I agree that L should be written ORIGIN-aware 😉

BTW, here is the one-liner which works in MC15, but its ugly and confusing looking

and because of the various symbolic evaluations it "grows" and always shows the intermediate results of the last example it was used for:

I would stay with the four-liner I posted before, using an ORIGIN-aware function L, of course

did you check your L function with an ORIGIN other than 0?

I think it should go wrong. The power of u, just before Ly, needs to start at 0, independently of the ORIGIN, so you should subtract ORIGIN from i there...

Then, you say this does not work in Prime.... have you tried? (What limits Prime from doing this?)

No, I didn't give it a try in Prime because I know that PTC has limited the use of symbolic evaluation there.
You probably know that solve block can't evaluated symbolically anymore in Prime.

What would make my sheet fail in Prime is the fact, that Prime does not allow symbolic evaluations inside of a program and my approach heavily relies on doing so (three times, because the first evaluation of L(..) must not necessarily be done).

I understand that the relationship for A:

is deduced from ODE:

But how do you deduced/reached the relationship for C:

Why the result is different?

C is the laplace transformed of the source term function f

I simply splitted Birkelands second program line into two, because Mathcad 15 does not offer a laplace function, only symbolic evaluation using the laplace keyword.

As shown in my last answer its possible to create a one-line function in Mathcad 15, too, but the multi-line version is much more clearer, I guess.

If you change the coefficient of the third derivative, you also have to change it in the "check-function" 😧 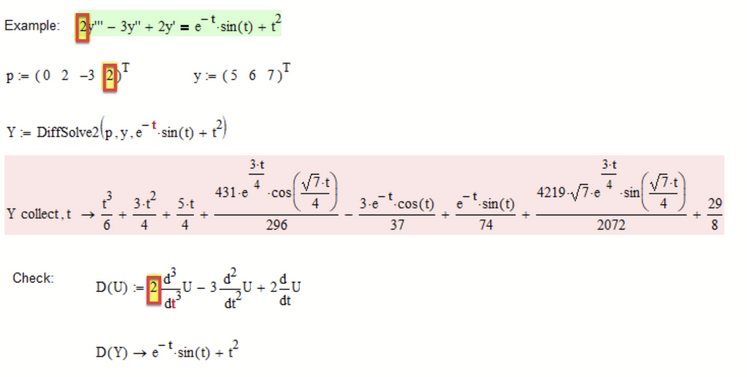 Thank you for pointing me to Prof. Birkelands approach which enabled me to create a version working for Mathcad 15.

What I wanted to achieve is to put an ODE into a function and that function to give me as a result the solution of that ODE...and not to make even the transformation from t domain to s domain manually and then somehow to take inverse Laplace of that result. (if it is possible such a thing:))


What I wanted to achieve is to put an ODE into a function and that function to give me as a result the solution of that ODE...and not to make even the transformation from t domain to s domain manually and then somehow to take inverse Laplace of that result. (if it is possible such a thing:))

Obviously you studied the file not long enough because it offers exactly what you are asking for!

You put the ODE into the function DiffSolve (by providing a coefficient vector, a vector with the initial conditions and the forcing function) and when you evaluate DiffSolve symbolically you get the symbolic solution. No need to manually make any transformations, thanks to Prof. Birkeland.

Yes, it is true...for about one day I looked in Professor Birkeland's book.

If I will have any more questions about ODE I will post them.

With some work and experimenting and putting some time into it, I guess it might be possible - not sure, though.

Now the next challenge is to:
1. Lift the limitation that the independent variable must be 't'.

2. Allow the function to accept a more natural formulation of the differential equation.

#1 is tricky, but I guess it could be done. See the sheet about simple first order ODEs I posted somewhere in this thread

#2 seems kind of a mission impossible to me, but I'd like to be taught better.

That file is hardly readable for me. Seems like a lot of pictures are left out.

Anyway, Number 1 is solved (for Mathcad 11), using a symbolic substitute function originally from Tom Gutman (in his file xx(1186) he named it Rep), which I adapted to be a little more versatile: 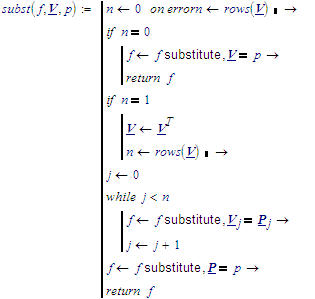 This allows me to: 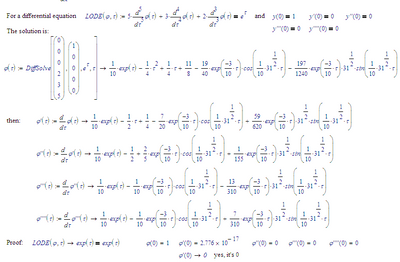 Here is the DGL1O file in format MC11 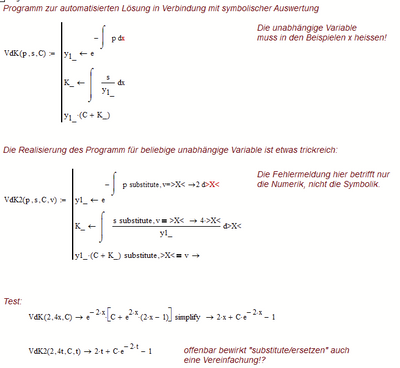 DGL10 doesn't fully run in Mathcad 11. Hope there's no need for it to.

I've tried my best to convert my LODEsolver to meet Mathcad 15's requirements.

If not: what is needed to make it run?

Unfortunately the sheet does not work in MC15. 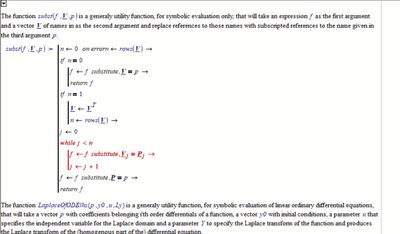 and when clicking that region, the symbolic evals of the transferred function is expanded, messing up the sheet.

The error is "This function refers to itself inconsistently".

A second error I spotted here