Cone shape. 2" on one side 5" on the other, and about 24" apart. Helical cut with a pitch of 24. Surface or sheetmetal doesnt matter to me. The questions is can I flatten it? 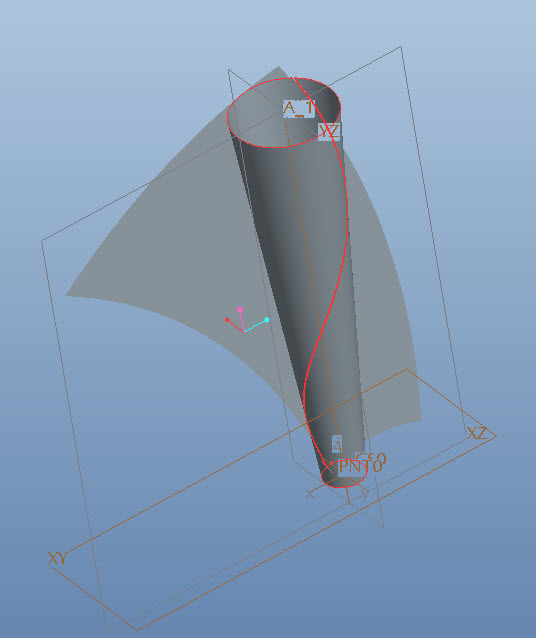 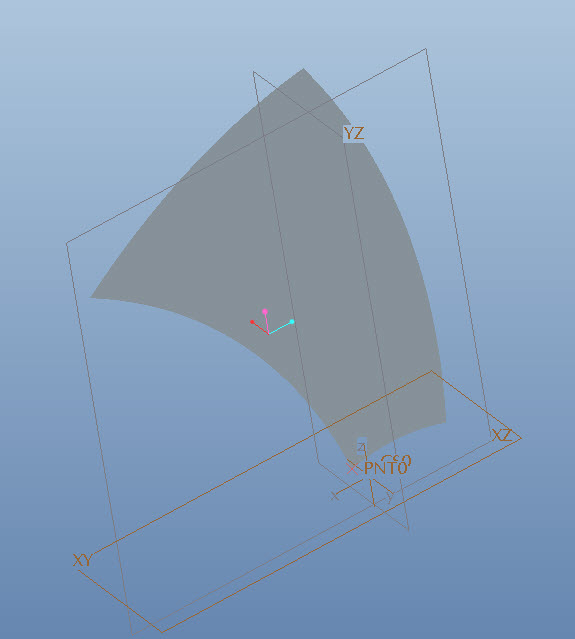 I have your geometry... I'll see what I can come up with tonight. I was almost able to flatten a similar geometry early today. I'll take another run at it.

:Sigh: I always hate to say never when it applies to Pro/E or Creo because there's USUALLY a way to create anything you need. Sometimes the technique to get there is hopelessly complex ... but it usually exists. I can't rule out that there's some strange method of creating the geometry you're describing. However, I've exhausted every reasonable possibility and I can't get it to work.

For reference, here's what I tried.

[1] Cone created as a simple blend and helical cut (1 turn /pitch of 24) as you described:

[5] Cone created as a Rotational Blend using semi-circular sections. Imagine a 359 degree circle with thickness of .06" (slight 1 degree gap). I made one section 5" in diameter and another 2" in diameter. I set them 24" apart and used a Rotational Blend to twist them 360 degrees out of phase. The small gap represented the material removed by the helical cut. This is a pretty slick technique... but it Failed.

In fact, the ONLY thing that seemed to work was a Regular Rip. I could successfully sketch a Regular Rip (as long as it was planar) and unbend the cone. Even when I tried to make a series of smaller planar rips to approximate a helical cut, the object would not flatten.

About the only thing left to do would be to draw the flat form of the cone and then use a Spinal Bend or Warp>Bend feature to roll it up into a cone again. This requires you to know the flat shape of the geometry FIRST before you create the cone. While you could probably come up with some sketches to capture the conical dimensions and then use those sketches to calculate and create your flat geometry, it doesn't seem worth it.

If the point is to take a conical shaped piece of sheet metal and have Pro/E flatten it... then you're pretty much stuck. I can't do it... and I am out of reasonable ideas to investigate. I'd bet the Mathcad guys could calculate the flat pattern... but I don't see an easy way to do this in Pro/ENGINEER.

Also... FYI, I investigated and SolidWorks can't do it either. SolidWorks, for all it's faults, has a sheet metal package that rivals that of Pro/ENGINEER. I don't like admitting that, but it's true. Still, even SolidWorks couldn't tackle this problem. I suspect we're asking the software to do something that is currently beyond it's capabilities.

I'm sorry I don't have a better answer. 😕 Maybe someone else can take a crack at it??

Well I probably tried ½ of the same techniques you used and came up with the same results. I also tried it in a couple of other software, and with no surprise had the same results. It would be nice if someone could just tell us it can’t be done so I can stop wasting time on it!!!

And see... this is why I try to NEVER say something "can't be done in Pro/E" because if you perservere and keep trying different techniques, sometimes you hit paydirt!

I believe the issue here isn't so much HOW the surface is made (because I tried multiple surfaces with the flatten quilt feature). I believe it's the way the trim is created- PLUS you can't have any thickness to your quilt. For instance, I tried a surface with thickness and "capped ends"... this failed. Starting with a thin surface, flattening, and then using thicken to give the surface depth is probably the way to go. You can then Bend Solid (i'm assuming) and get the cone you're after.

Very nice Jorgen!! Thanks for the response!!

So I got around to testing the flatten. I did the revolve surface, then a helical thin surface trim. I still cant get that surface to flatten. I have the method set to Automatic… I have datum points in all 4 corners that I have tested… What am I missing????