I want to linked it with gear teeth  (involute profile)

i drawing involute on shaft and hub with the same parameter

when i assembly shaft and hub  i find low profile decal. 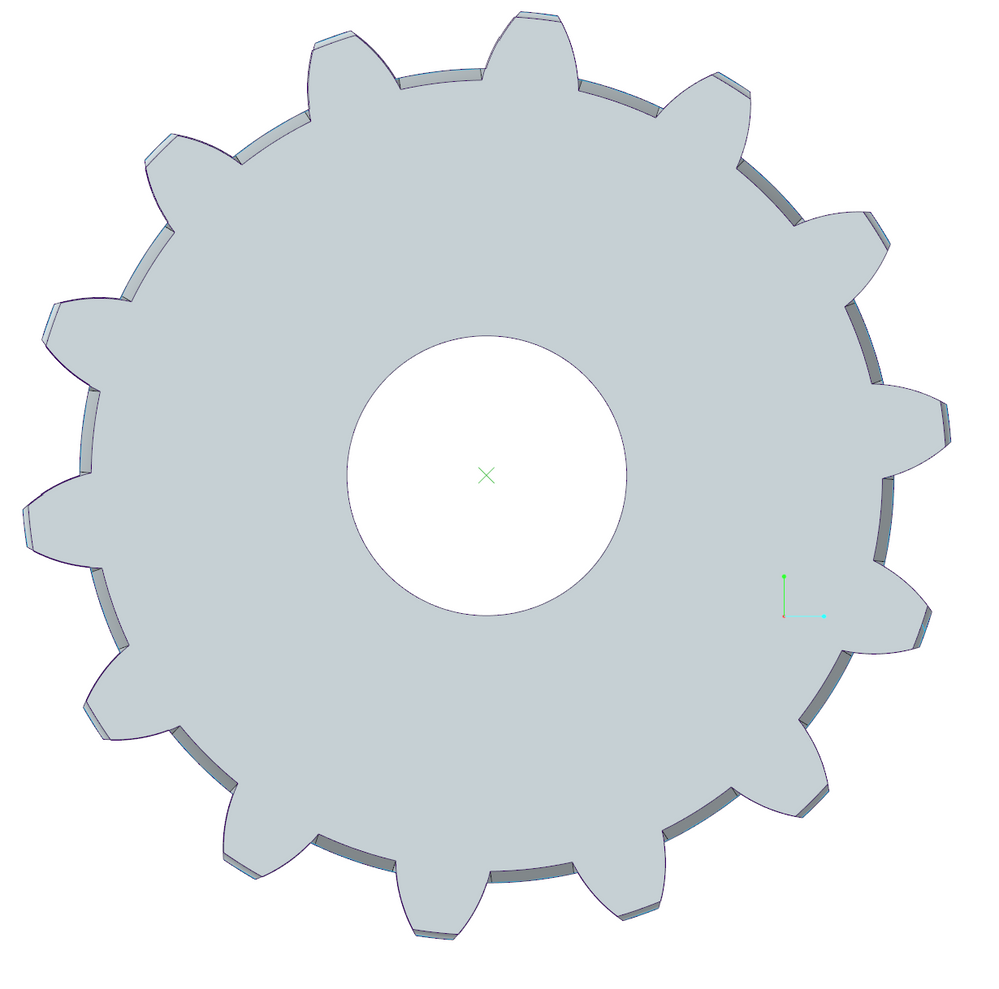 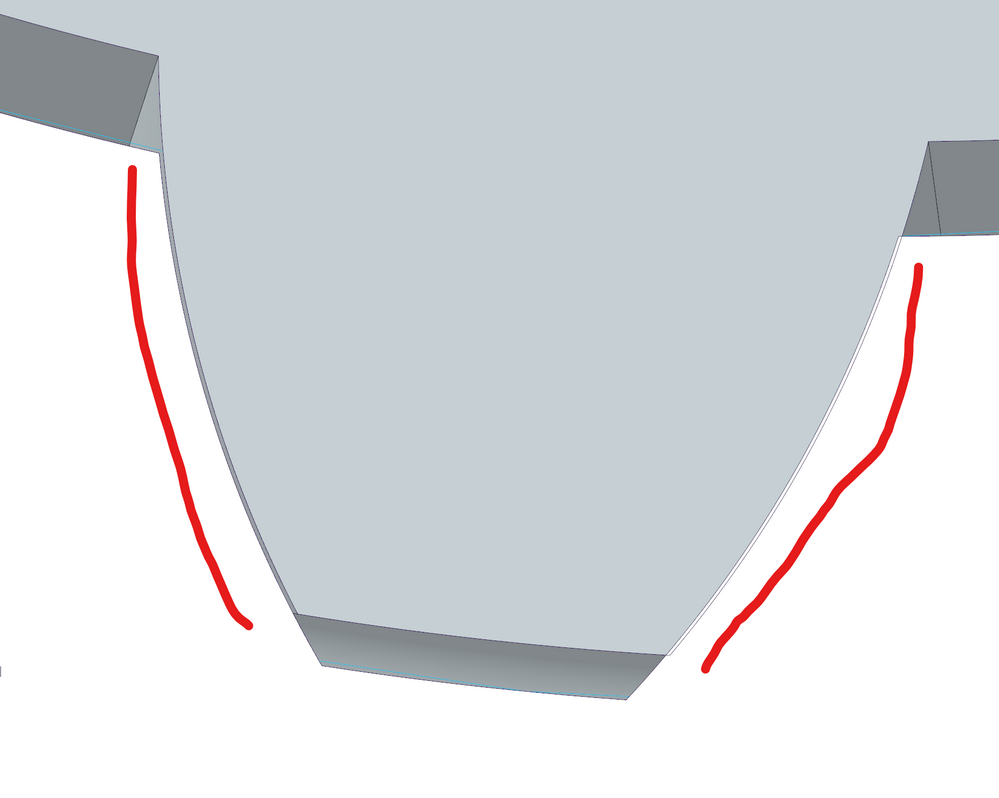 in the hub, i use a simple function for cut teeth profile

in the shaft, i use un sweep function 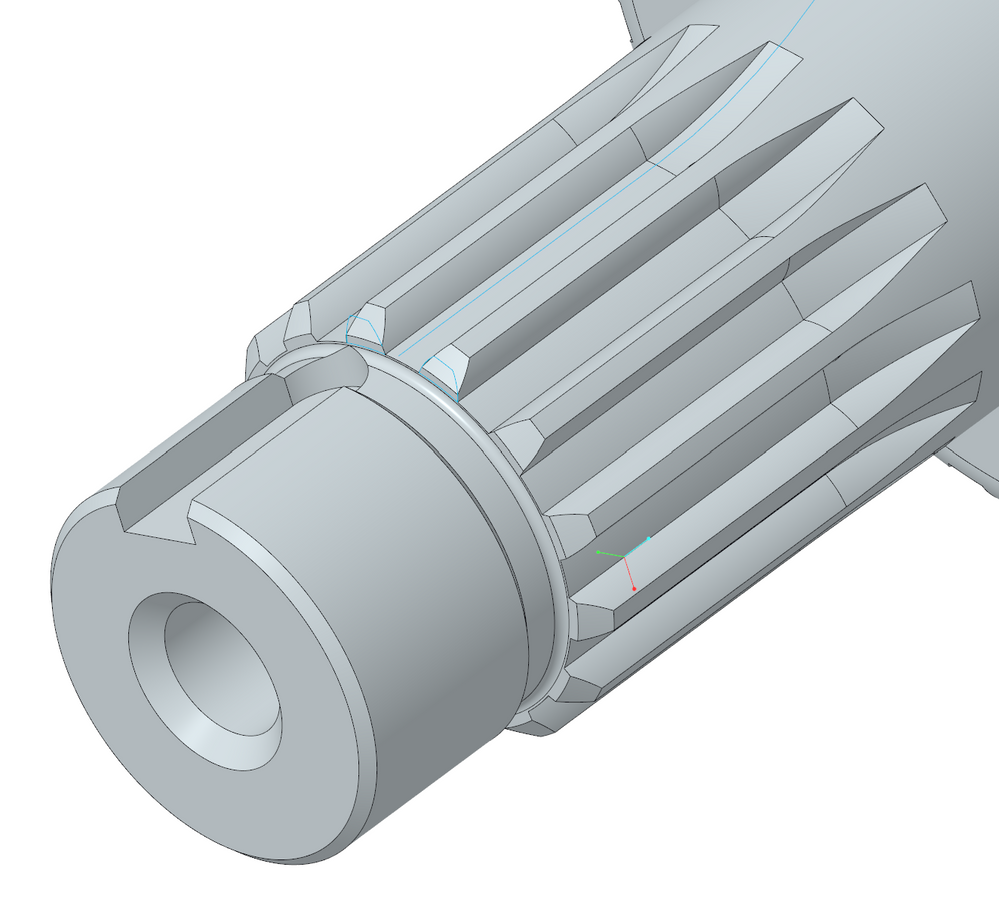 perhaps this decal come from sweep ?

i am sure of my involute

anyone have an idea ?

Another way to drawing gear without mirror feature

First , we calculate the intermediate angle (angle of incidence)

TETA=acos(cos(alpha)*(R/Rs))  (it possible to check it, after in the sketch)

Note : here i use a involute equation 😉

And now, we calculate the tooth thickness

now we can drawing a sketch:

the origin is the contact point of gear pair (green circle) 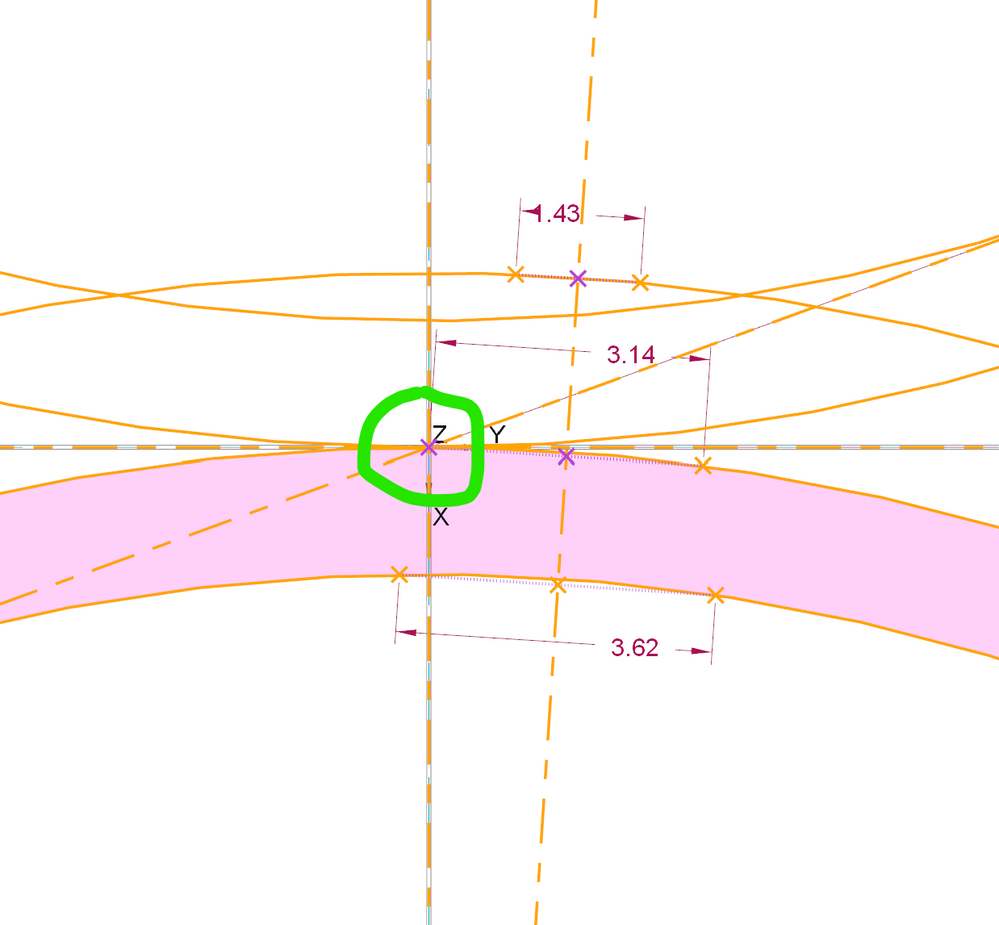 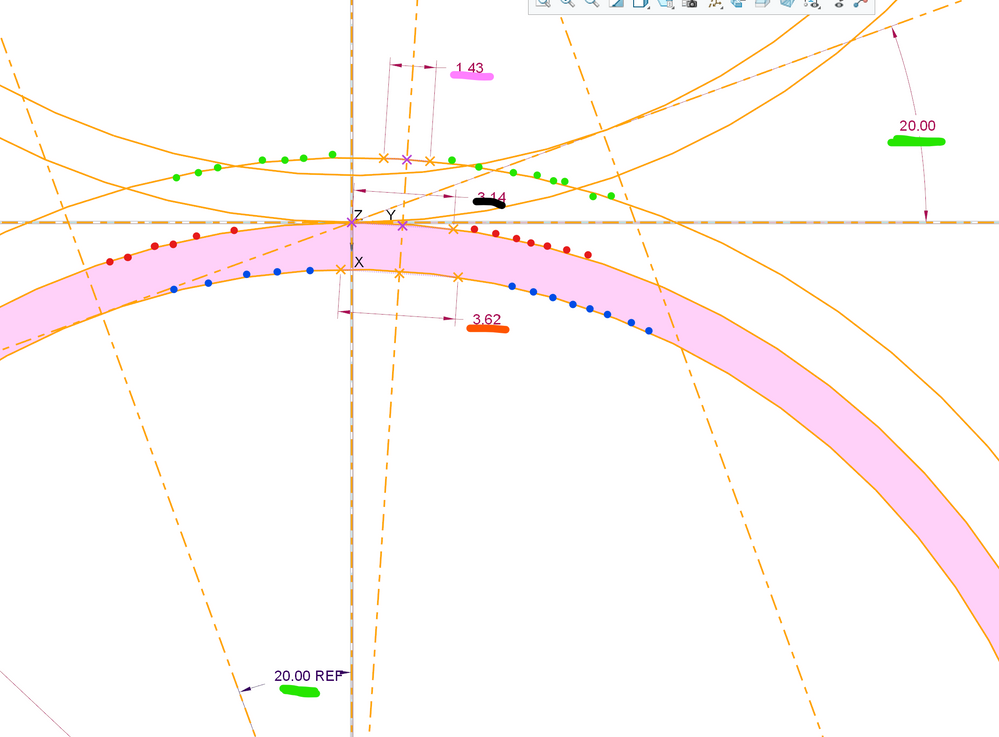 and finally, you drawing a arc circle with 3 points 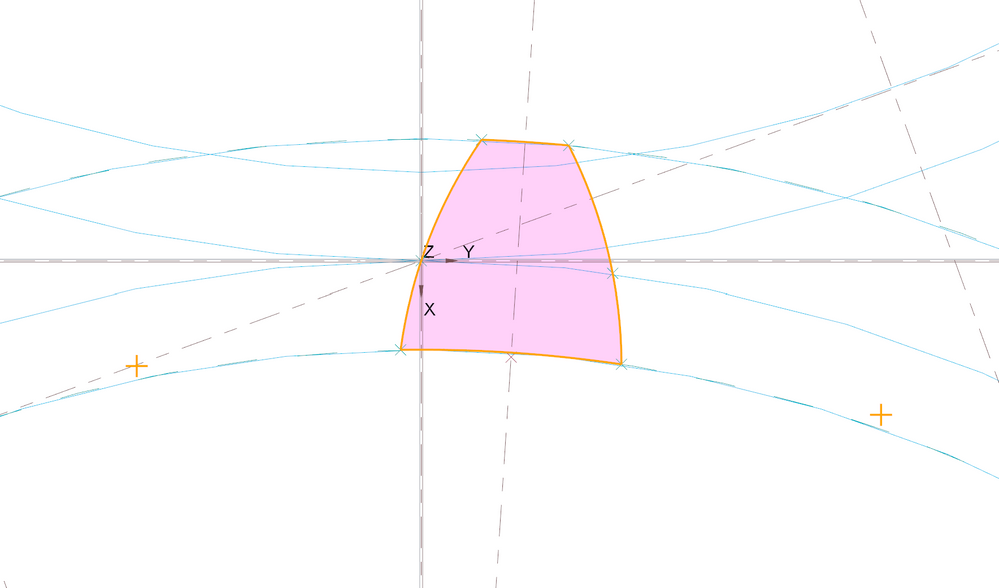 obsiouvly, if you use diametral pitch DP  instead modulus

I don't understand what help you are asking for?

first, i drawing hub and shaft with extrude feature

the involute profile is good, i make it with involute equation

this result is perfect! 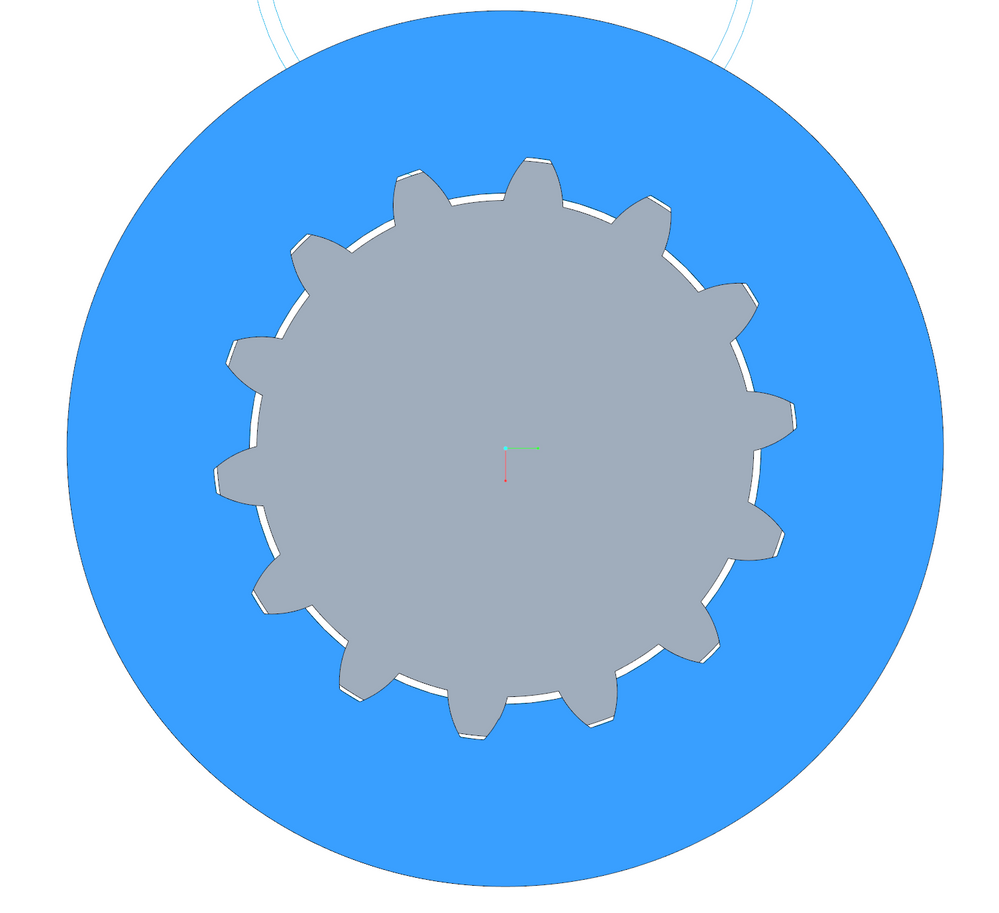 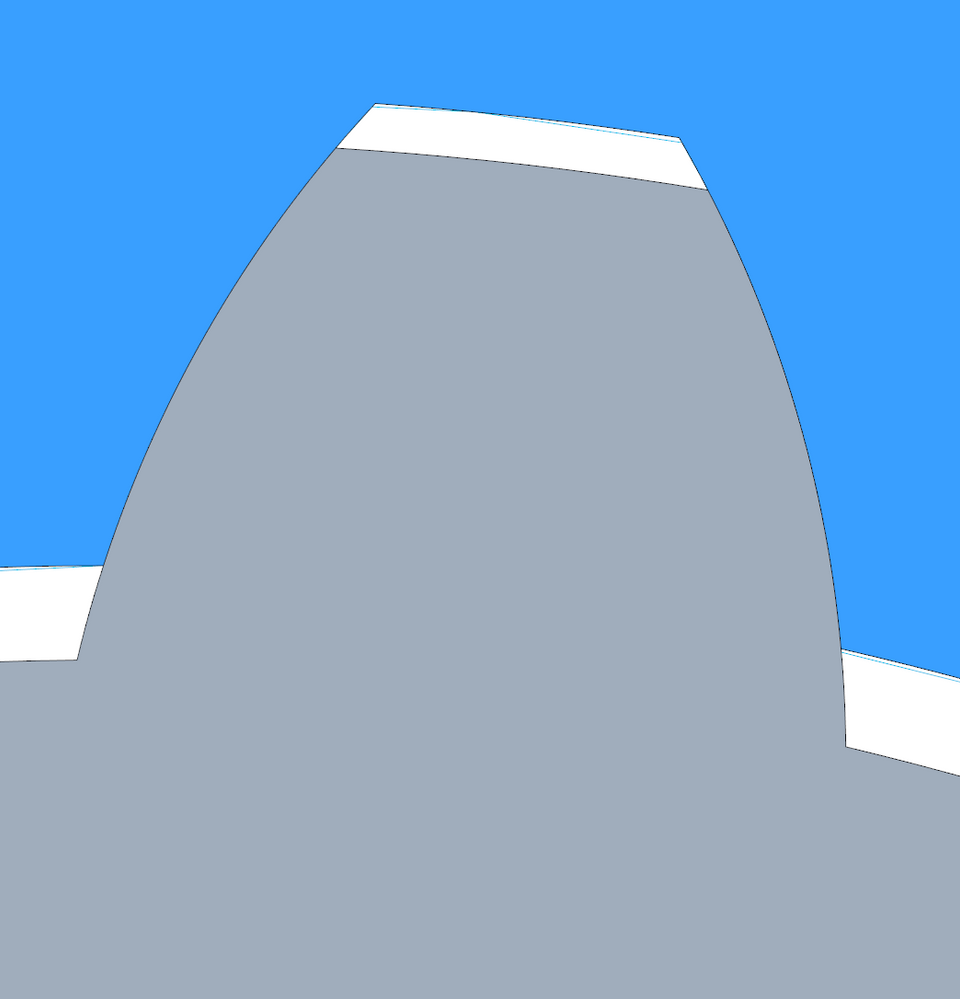 the sketch is make with the same involute equation

but i use a sweep feature ( not extrusion feature)

because in real life, when i machining the shaft i have the cutting tool geometry 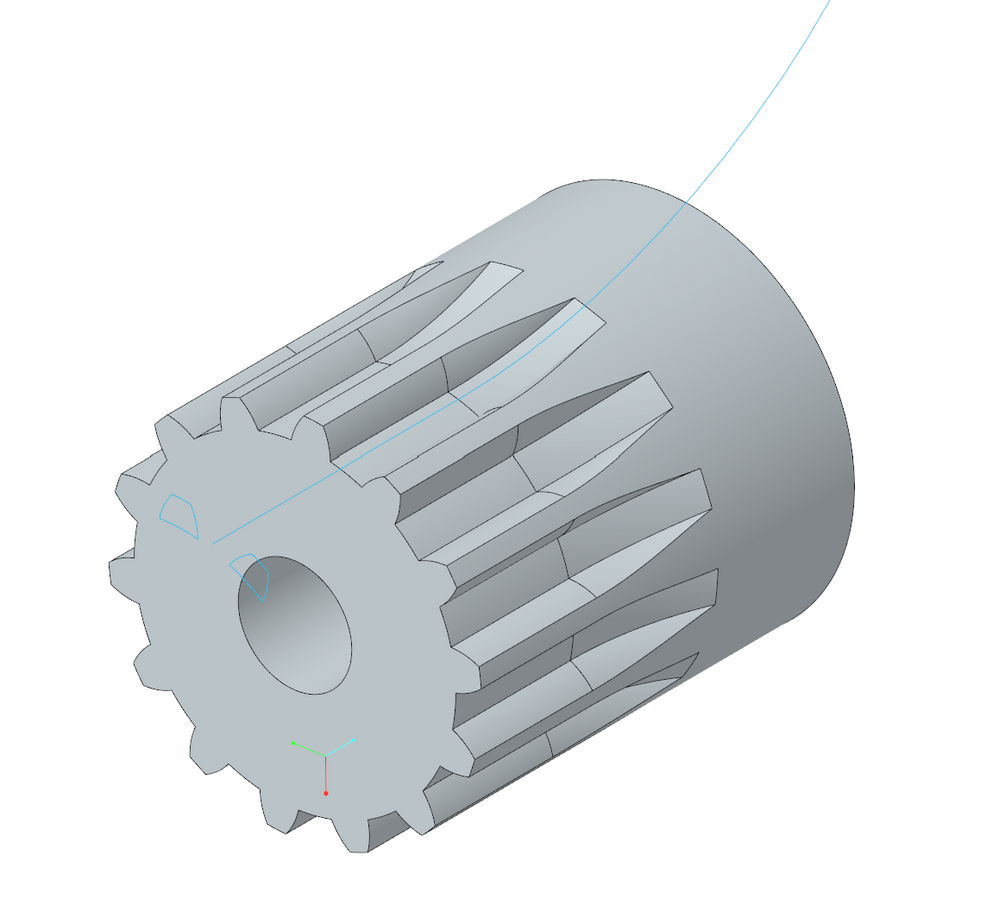 After this, i assembly this part, and now: 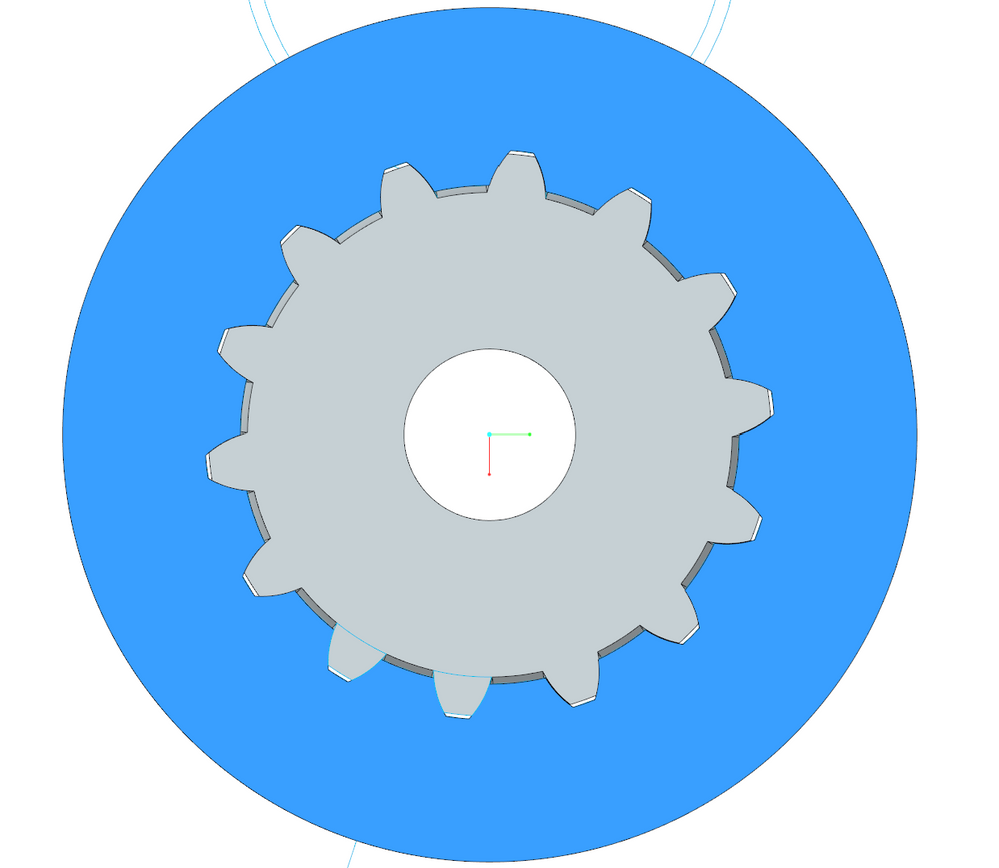 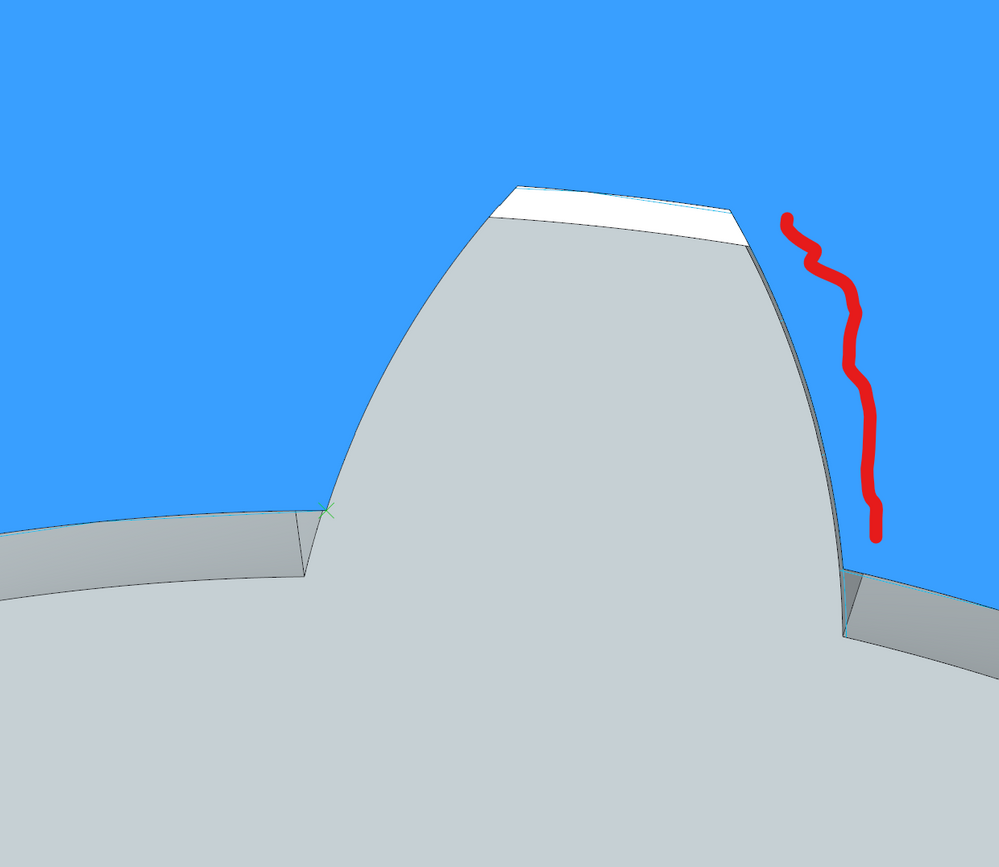 i have offset between hub and shaft😱

it is possible th sweep feature make it ?

i use Normal To Trajectory

i don't uderstand this options,

If you look at this part of the shaft, does your sketch exactly match the sweep  cut made? 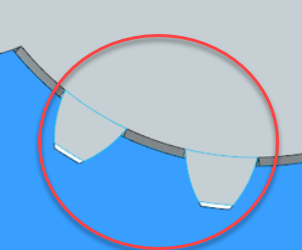 yes, the sketch for sweep feature  is correctly

if this picture, you can see the tooth profile

the sketch is only a copy of tooth edges 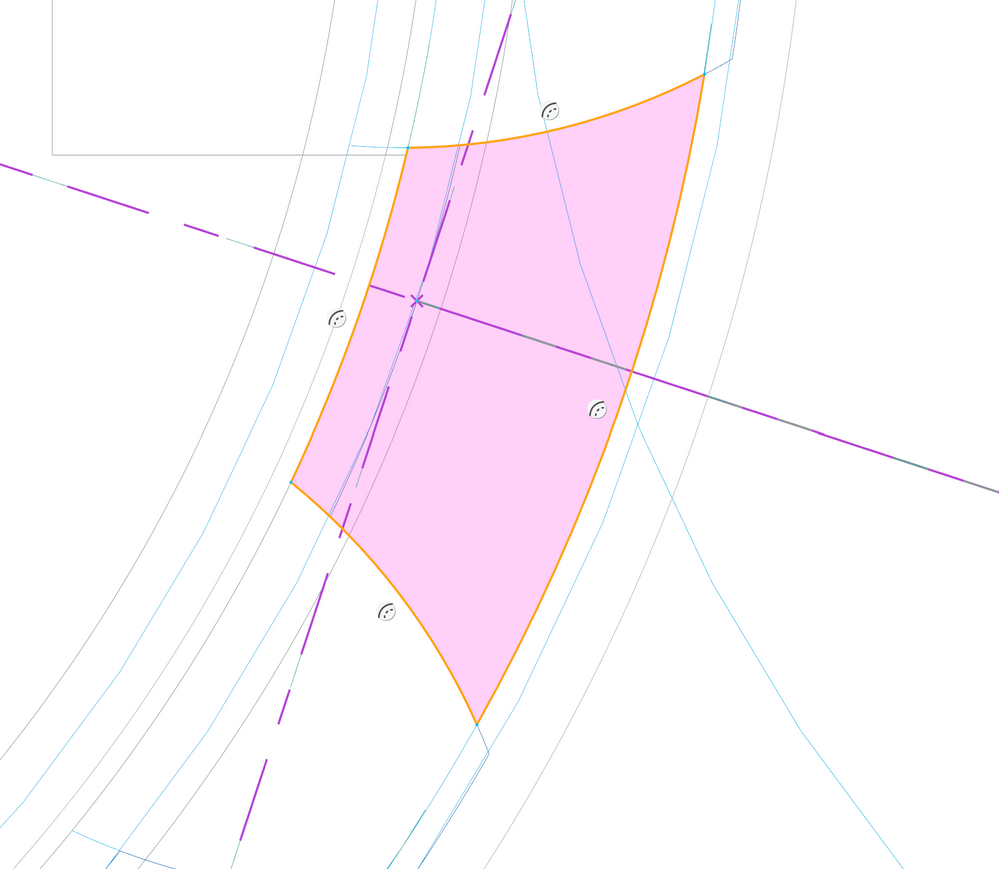 the problem appear when i make pattern

but i use a parameter for a right division , not approxymativly angle.

in a first sweep, the geometry is perfect

after pattern, the offset appear, and

It grows with each tooth (green arrow) 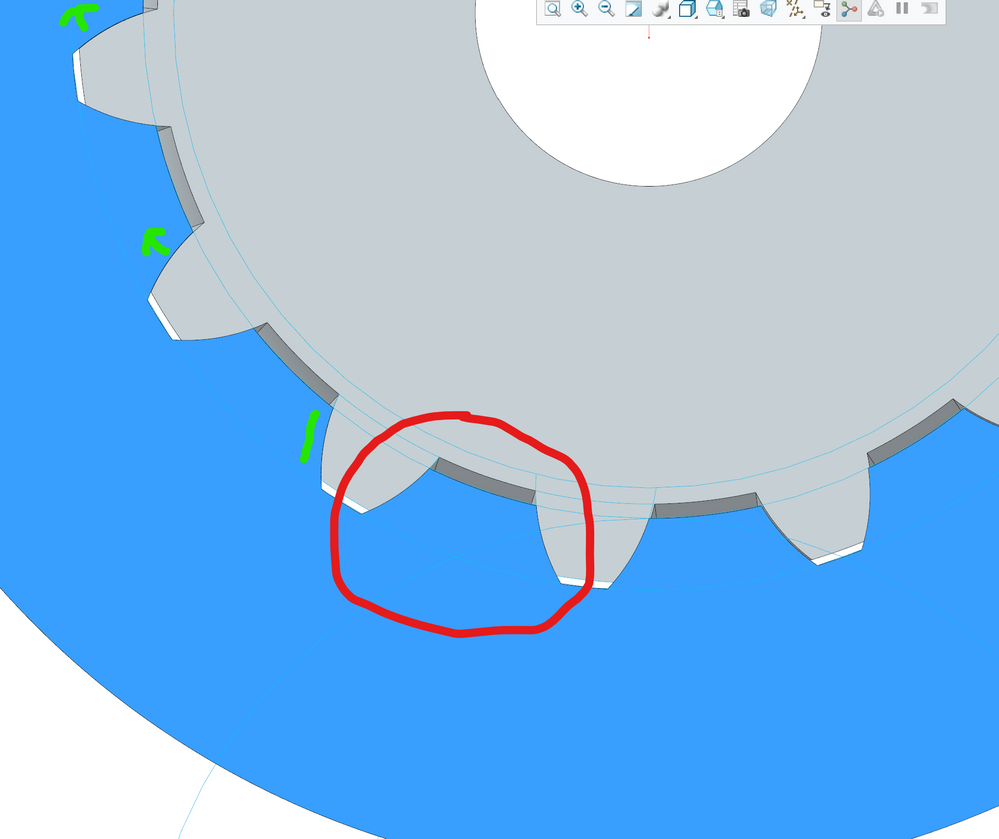 If you can, attach them models. You'll need to zip them first. Also state what version of software you are using and if it is student/educational version or commercial.

this image looks like it is larger on one side the other but that maybe just the angle of viewing. 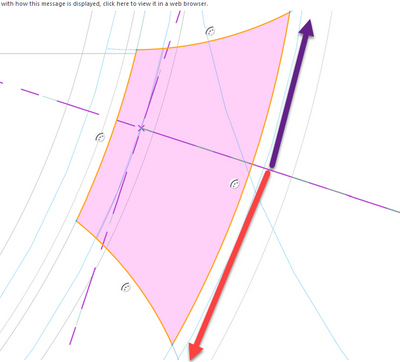 A while back I needed to make  a custom gear with involute geometry similar to what you are doing.

My approach was similar to what you were doing:

(2) Sketch and extrude a single tooth using that curve, and mirroring the geometry about a centerline.

(3) Pattern that tooth to create the full gear.

As you state, I used parameters, calculated the angles and all that.

The trouble is, when I sent the model out to have the wheel built, the wire EDM guy told me the geometry was not symmetric for each tooth.

When I checked into it, I found that by iterating on the gear (changing the number of teeth, etc.) the geometry was no longer the same for both sides of the tooth. The side that was a direct projection of the involute curve I'd defined mathematically still matched, but the mirrored curve in the tooth was not right. It was more approximate, curvature didn't match, etc. What I ended up doing to fix it was to build a half tooth extrusion, mirror that about its center plane, group the half tooth and its mirror, then pattern that to create the full gear. This worked exactly right. Maybe this is of interest to you?

Also, in the past we had troubles with patterns around axes because:

(1) The accuracy (File->Prepare->Accuracy) was Relative, the bad default. I have this set by default in my start parts to Absolute 1.0e-05 inch.

(2) The angular pitch for the pattern has "Round Dimension" checked? This was something that happened when someone was using the dimension on a drawing and set it to round to three decimal places, which really has a big effect when the pattern gets to the 50th tooth. Check to make sure, in your config.pro, that "round_displayed_dim_values" is set to "NO", too.

this is exactly the problem (same machining problem)

in second time, i drawing tooth not directly with involute équation.

1/ I calculate E .  Is tooth thickness on primitive circle (d=m*Z)

2 / i calculate T . Is tooth thickness on external circle

3/ I calculate Eb . Is tooth thickness on base circle

After this i drawing arc of a circle passing through 3 points, same line on the other side of the plane of symmetry

i try to modify config pro

The main thing I found seemed to cause trouble was when I mirrored involute in SKETCH. It seemed like mirror of the spline was not an precise geometry on mirrored side - it acted more like a "one time" mirror, which approximated the true geometry. What did work was I created a half tooth, using the involute curve as solid geometry EXTRUDE. I then mirrored the solid geometry about its center plane and it was the exact same geometry. It seems that the mirroring for solid geometry is precise, but mirroring the spline in SKETCH is not.

All this happened when I was still using Creo 4, I haven't tested for Creo 9. But I suspect it would be the same.

but it's still weird

even if i use curve , at some point i have to make sketch with it ... problem

Using the CURVE is not a problem.

(1) Make the CURVE. It's really the only way to define the involute.

(2) Make an EXTRUDE, using the CURVE for the side of the tooth. This extrude is a half of a tooth, planar on one side, involute profile on other side.

(3) Mirror this about the planar surface.

(4) Group the extrude and mirror.

(5) Pattern the group about an axis to make the complete gear.

Again, the trouble seems to be that the mirror within a sketch is "imprecise". Mirroring solid geometry apparently is not.

Also, I don't follow the trend I see of people making a sketch, then making a feature. The only time I'm going to make sketch features in a model is if I intend to re-use the sketch for more than one feature. Otherwise it's just useless clutter in the model tree, in my eyes.

Another way to drawing gear without mirror feature

First , we calculate the intermediate angle (angle of incidence)

TETA=acos(cos(alpha)*(R/Rs))  (it possible to check it, after in the sketch)

Note : here i use a involute equation 😉

And now, we calculate the tooth thickness

now we can drawing a sketch:

the origin is the contact point of gear pair (green circle)

and finally, you drawing a arc circle with 3 points

obsiouvly, if you use diametral pitch DP  instead modulus