I have limited experience in doing dynamic analysis in Creo mechanism so hopefully I am missing something easy. I have a pretty easy analysis I am working where my only load is gravity and I am looking at the effects of a 2 point lifting fixture that has a load held tight at one end and the other end has the equivalent of 1" of slack. Ideally I could idealize wire rope (that's for another topic) but for now I am using a couple of modeled linkages for my simplified cables. The intent is to determine the acceleration of catching the load with the 1" of slack in it and the overall movement of the lifting fixture and load. This seems to work but I have found when I change the measure I am looking for or change the frame rate I get wildly different results. I can have what looks like what I would expect, take a copy of that analysis and boost the frame rate, to make export to video formats time correctly, and get completely different results. Why would the graphical frame rate or looking at different measures provide different results?

When I say wildly different I mean not physically possible, like gravity has gone haywire!

Thanks for any help!

You are on the right track because it is a good idea to check models for their sensitivity to frame rates.  I also may check them relative to the mechanism relative assembly tolerance (1E-5 vs 1E-6)  This setting also affects simulation times, sometimes dramatically.

Creo mechanism is not generally an impact solver.  It may have trouble if the stiffness involved are too high and the time travel of force/displacements (speed of sound issues related to stiffnesses).  The cable stiffness must be reasonable, not rigid.

However, the first thing I would try is setting your assembly accuracy to something other than the default 0.001 relative tolerance.  1E-6 would be my first try.  Here is a screenshot of where to set that. 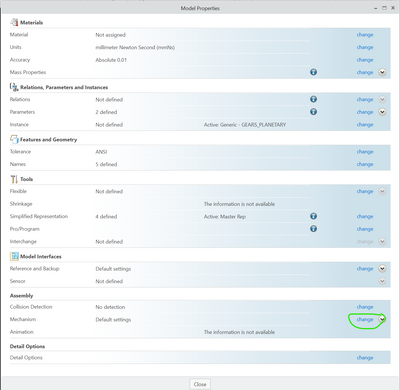 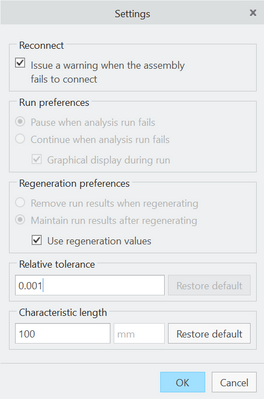 Finally I would try to put some reasonable damping into the model.  Damping is another factor that an be studied to see how much it affects results.  You want enough to stabilize rapidly changing forces but not so much that you suppress the forces you are trying to measure.  If you have ever felt a rope go taught under load you would have felt the high frequency vibrations generated like a guitar string.  That is some of what you are fighting here.

Hi, could you post some pic or video concerning the assembly and particularly how did you model the linkage?

You might find this post I just made interesting.  I was playing around with trace curves and noticed the frame rate wildly affecting the results.  I expected that frame rate could affect the quality of the trace curve, but not the analysis results.

It seems like the "graphical" frame rate isn't just graphical.  It can influence the analysis results, but only at high frame rates and depending on what the mechanism is doing.  At low frame rates, when your slack rope/linkage engages, I think Creo automatically lowers the analysis time step to solve that event accurately and then increases back to your frame rate time increment after that event.  When you reanalyze with a high frame rate, the smaller time increment you get with that may be small enough that Creo doesn't need to automatically lower (adapt) the analysis time step or at least not as frequently as with the lower frame rate.

You might also look into the integration method setting Creo uses (mdo_integration_method).  In my post, I noticed that implicit integration had lower error than the other methods and was relatively insensitive to frame rate.  I'm not sure how much of that is due to the peculiarities of my mechanism.

Just thought I'd follow-up since I've learned more about this issue.  I agree with SweetPeasHub, you should at least decrease your mechanism tolerance by a couple orders of magnitude.  It certainly sounds like you have the default 1E-3. 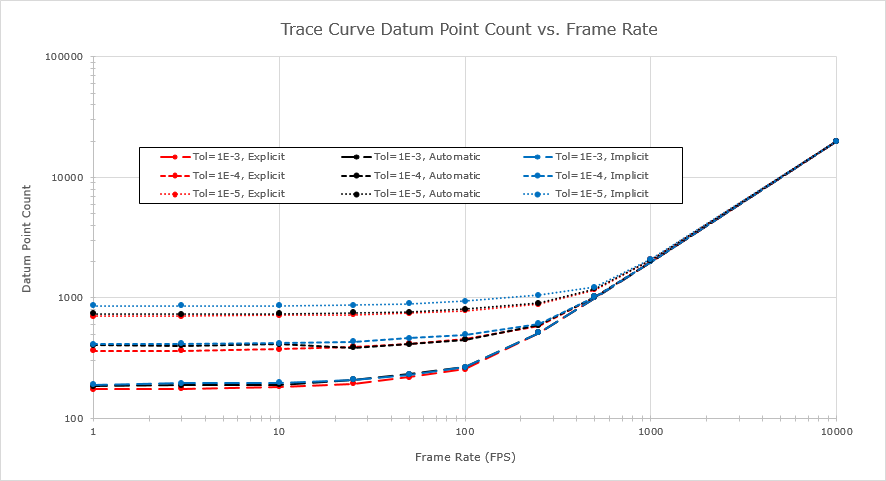 This is a plot of trace curve length errors, but you can view it as distance traveled of a point.  This tells me that if you decreased your mechanism tolerance by a couple orders of magnitude (assuming it was at 1E-3) you could do your analysis run and your animation run and the difference shouldn't be significant.  Or you could do one analysis for both purposes with a reasonable frame rate. 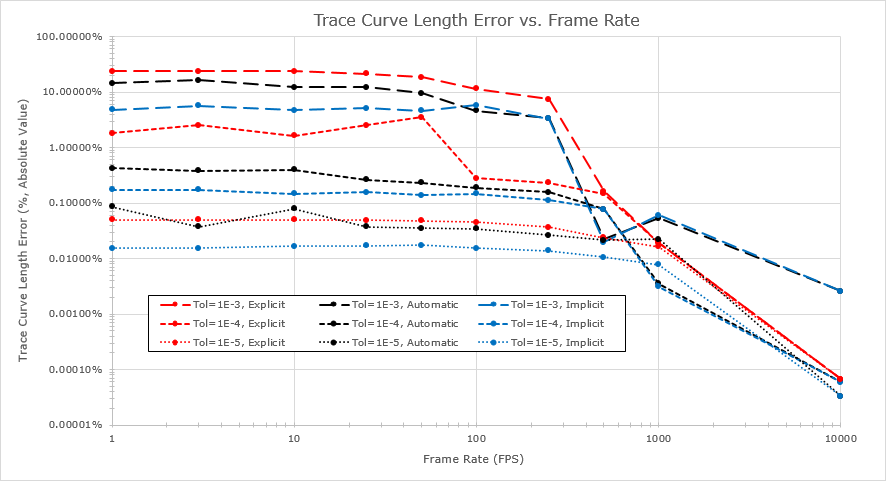 I'm very interested to know the two different frame rates you used which gave you such different results, as well as the mechanism tolerance.