I have MathCAD version 15.0 and the new WRITECSV function does not appear to work. I made a simple matrix (M) and tried to write the file using WRITECSV("data.csv",M) and I get the error "this value must be a string" on the M. I tried changing M to "M" and then I get the error "The seond parameter must be a matrix", which I expect since, yes, M is supposed to be a matrix but WRITECSV doesn't accept a matrix! What's wrong? Has anyone else had this problem? 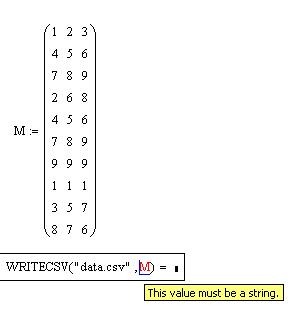 Yes. I see the problem as well.

Seeing as the CSV doesn't appear to work, Mike, there is no way of telling by experimentation!

However, I'm guessing that (for some strange reason), the csv should allow strings in M but the xlsx doesn't permit anything but a number (scalar in Mathcad terms) ... except that 'scalar' in Mathcad should include complex numbers and WRITEEXCEL doesn't seem to allow that, so just reals.

Before spending a little time on this forum I struggled to come to terms with Mathcad terminology.

I have just searched through the help files and there doesn't seem to be anything in there to help. How is a new user meant to know the difference between scalars, values ect?

Ah. Documentation error and it should have been in line with the WRITEEXCEL arg list.

And another doc error ... WRITEEXCEL will write strings.