We are using ThingWorx Manufacturing App and so far we can successfully connect to KEPServerEX and fetch simulated data properly. Alarms also works fine. But in Asset Advisor -> Performance Tab, there is "Status Of Week" section which does not working at all. % and Hours sections both are not getting any data.

Any suggestion will help.

It's allready working. I was using "," as decimal separator as you said. So I switched format of date and also "Language for non-Unicode programs" to English. Then I reinstalled Thingworx and KEPServerEX and it's working now.

Thank you for yesterday's Webex meeting and your help. I hope you fix error with comma soon, 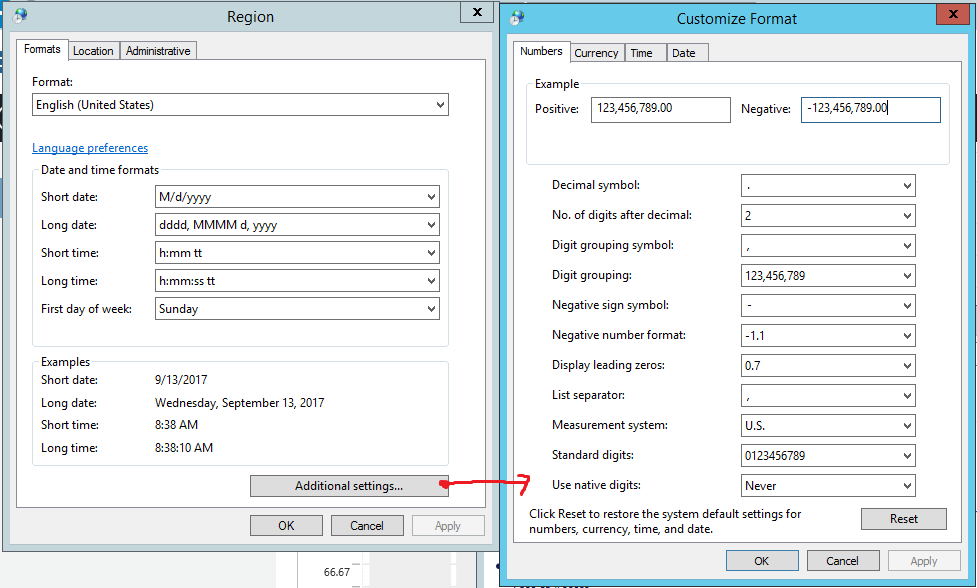 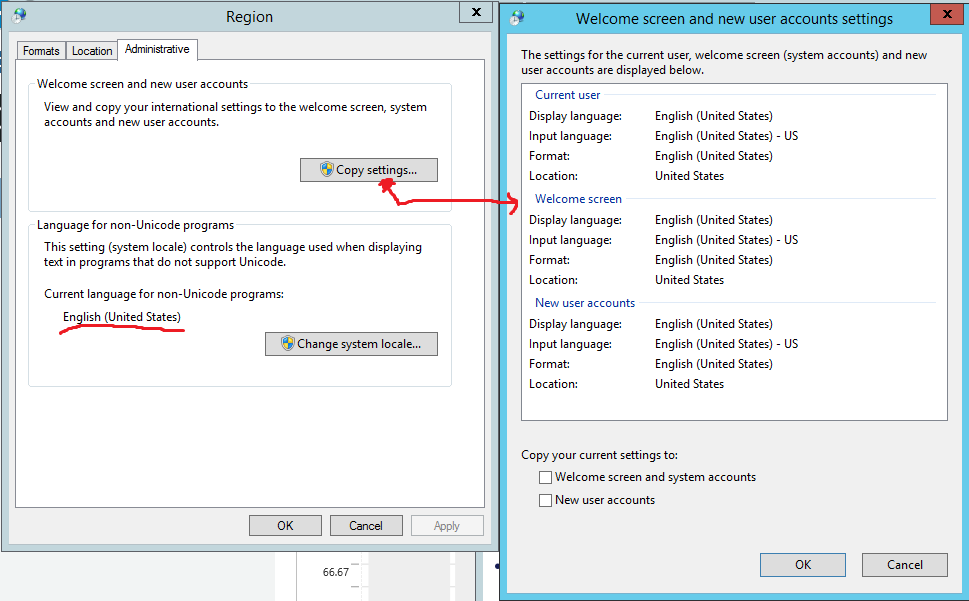 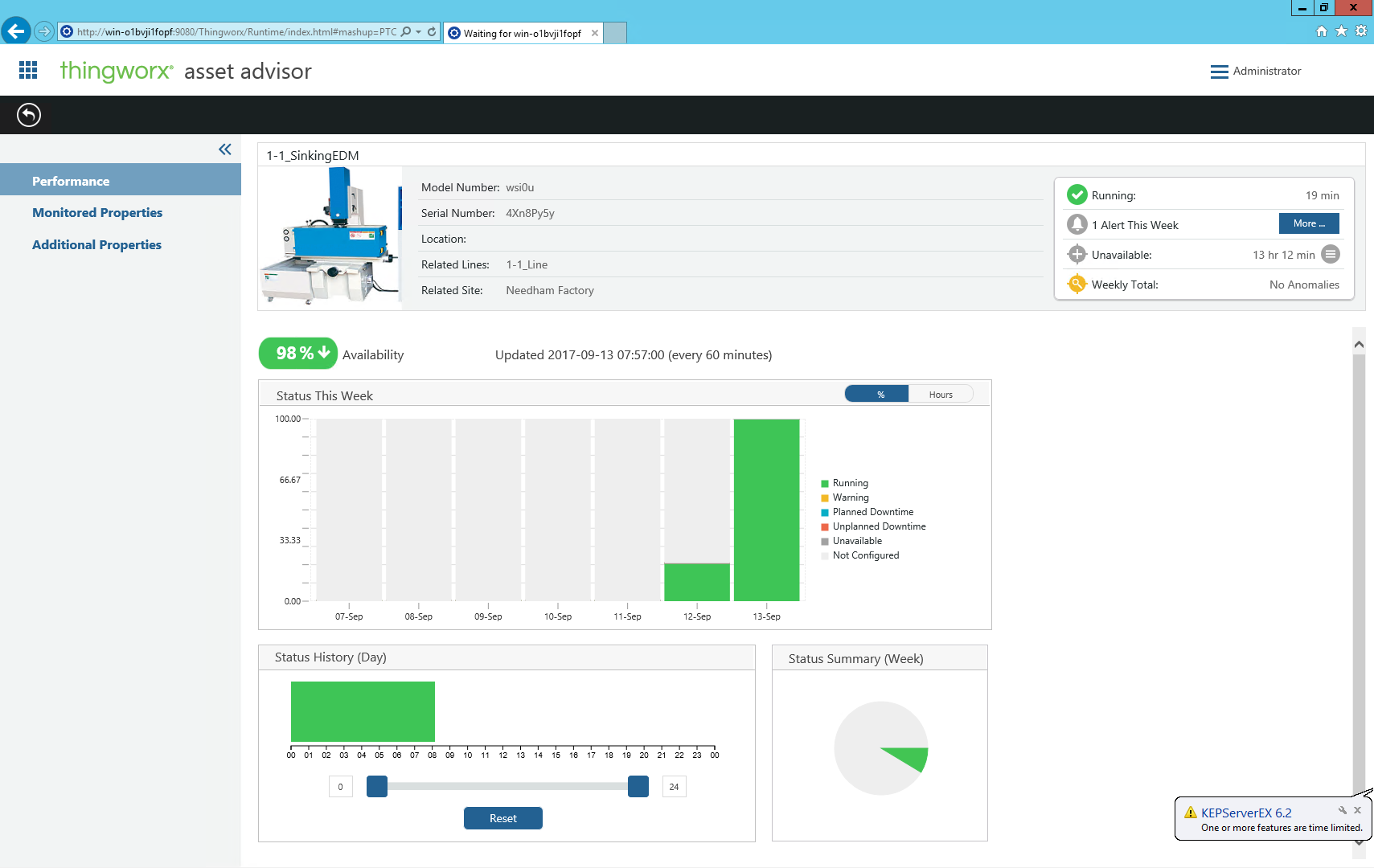 Are you logged in as Administrator or a user you created?  If you try under Administrator, do you still get the same results?

Please check to see if the properties are defined with a Base Type of INTEGER.  If so, change them to Base Type of NUMBER.  If this does not resolve the issue, please provide the application log for analysis.

By looking at your screen shot, the status this week chart widget is not pulling the data. I see an error. I also see Running as 0 minute. Can you try this after few minutes allowing machine to do calculations?

I am pulling data from KEPServerEX Simulated data. In KEPServerEX property there is no integer section so i give a Float value which works fine with other wigdets. Alarms also works fine too. I can make planned or unplanned stop by giving boolean datas manually from kepserverex. But status of week just wont work at all. Its a demo version of TMA. Perhaps not all the functions available for demo app.

Thank you for your comments.

Note : I am adding more Screenshots to show my TMA structure. 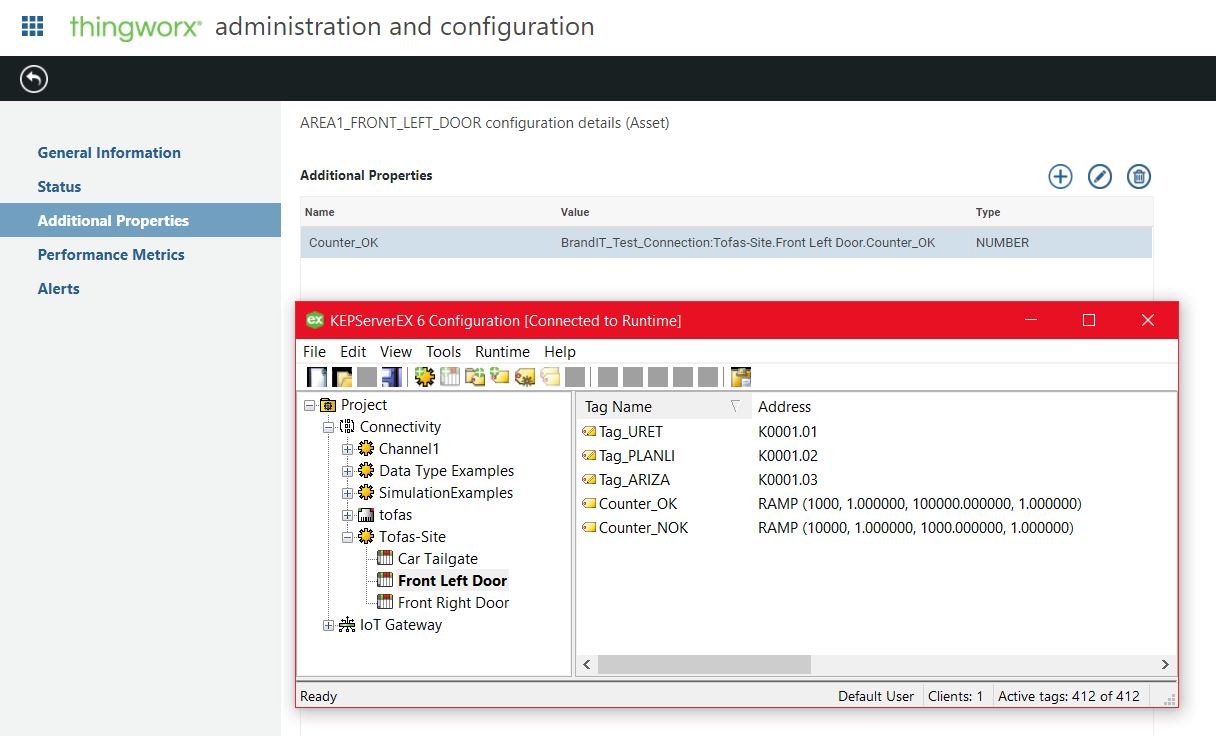 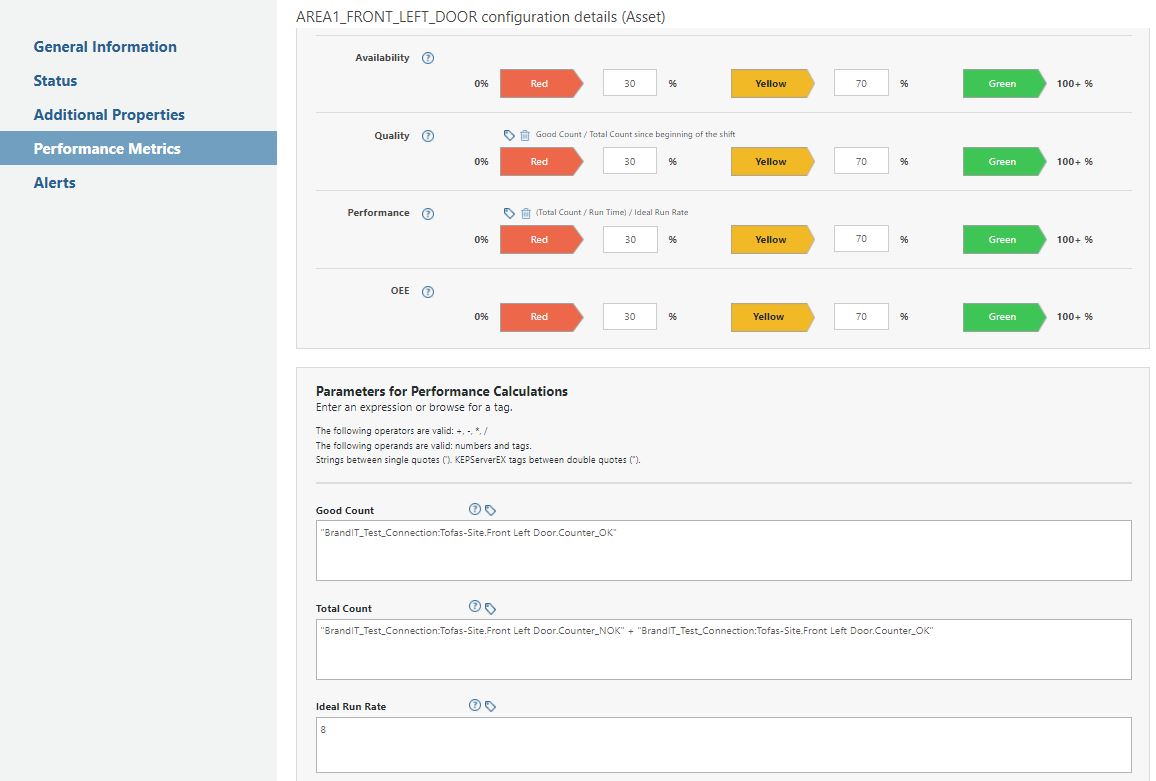 Can you get me the version? We should start with that then. I know some of us are still using pre-release version. That has known issues. Those issues were resolved in released version and I validated your specific use cases in my test instance. It looks good.

That versioning should be fine - did you install the developer-kit version or the freemium version?

This version is good. By looking at the screen shot and other information in it, that data is flowing from Kepware. I still see error icon in Status of the Week. Instead of % tab in Status of the week widget, can you select Hours tab and check? It looks like some error in binding the widget. As Milan was asking, the type of licensing such as Freemium, Dev kit or  Add-on to Thingworx will help us to determine the next step. Probably we may need a session with you debug this.

I ask because if you're using the developer kit, we can poke at the mashup behind the scenes to see why that particular widget and status aren't working, while everything else is.  When you use the developer-kit or the freemium installer, you're actually installing all of ThingWorx 8.0.1, but different features are unlocked with different licenses.

I have the same problem with "Status This Week" indicator.

Everything works properly only "Status This Week" indicator doesn't work.

Have you already solved this problem?

Thank you for reaching out. We are unable to reproduce this problem, and would like to investigate further. I will contact you outside of this Community thread to arrange a time when we can work with you to troubleshoot this.

I'm having the same problem with version 8.0.1. Is this problem resolved? 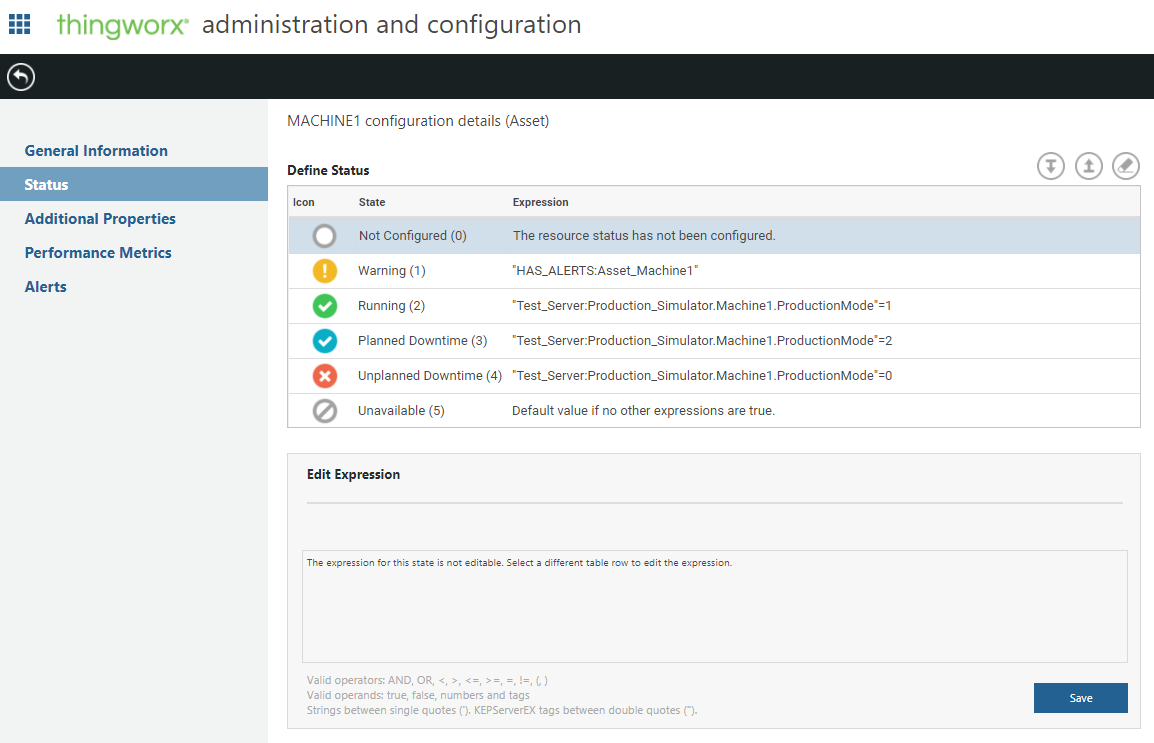 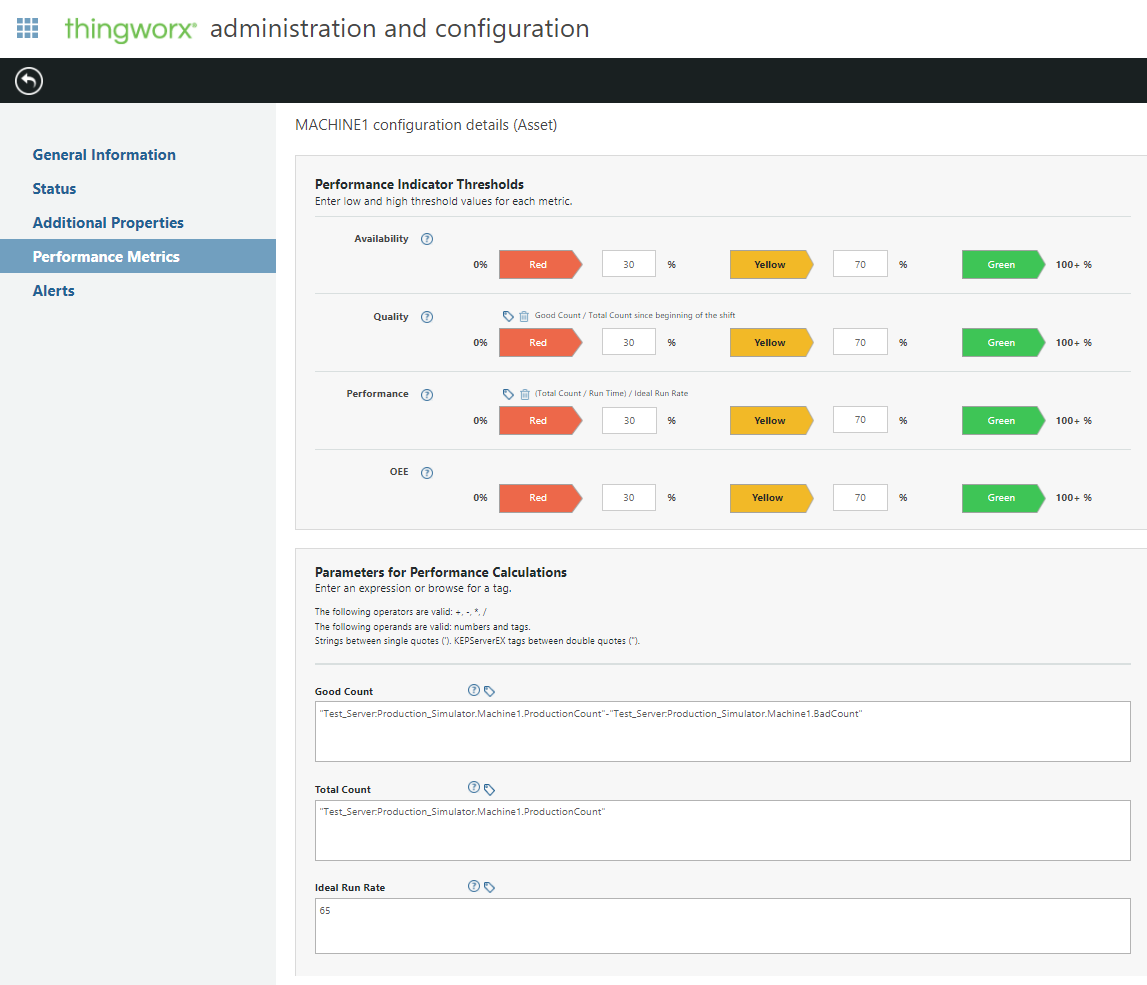 We are currently investigating this problem, and will post an update soon.

What language the OS is configured to?

I use Windows - English. Is it related?

I hope language does not matter. Are you using Comma as decimal separator? Can you open the PTC.SCA.SCO.AssetMonitor.AssetDetail.PerformanceMonitorController Thing and run the service GetStatusHistoryForPastWeek? You can select any Asset you configured as input. The Boolean input doesn't matter in our case. Can you post the output?

I used the express installer so I can't open the composer and can't run any services.

It's allready working. I was using "," as decimal separator as you said. So I switched format of date and also "Language for non-Unicode programs" to English. Then I reinstalled Thingworx and KEPServerEX and it's working now.

Thank you for yesterday's Webex meeting and your help. I hope you fix error with comma soon,

Thank you for following up and sharing these results with us!

Murat Can Berber​ and Ozgur Aslan​, can you try following the steps described by Stanislav to change the Windows' language settings? In particular, set the decimal separator as a period instead of a comma, and set the "Language for non-Unicode programs" to English. You will likely need to reinstall ThingWorx to get these new language settings to be fully adopted by the application.

Varathan discovered what may be an issue with how the floating point values are being parsed into a data table, with a comma specified as a delimiter. For OS language settings where the comma is used as the decimal point, this will cause the floats to be incorrectly separated around the decimal point.

We need to reproduce and investigate this internally. In the meantime, please try to workaround described above and let us know how it goes.

I tried all the steps that Stanislav described, uninstalled everything and installed again, but problem was not resolved.

Anyway, changing the local settings of OS is not the correct solution because me and my customers live in Turkey and need to use local settings. I can't offer a change like this to anyone.

There should be a localization setting in the App. 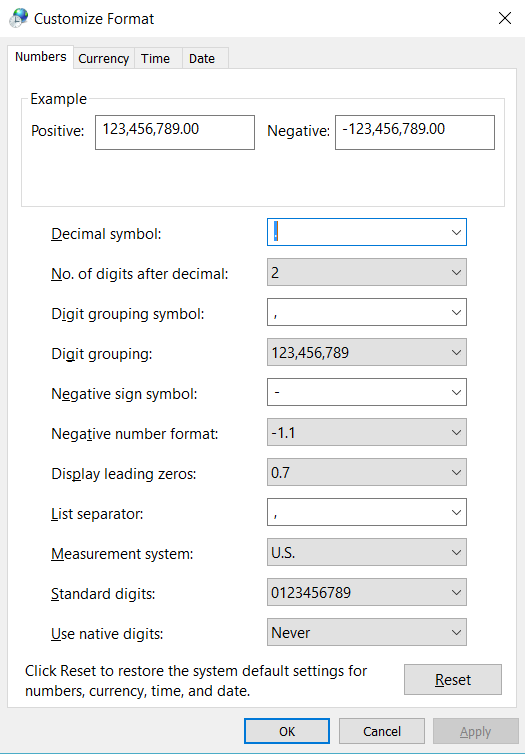 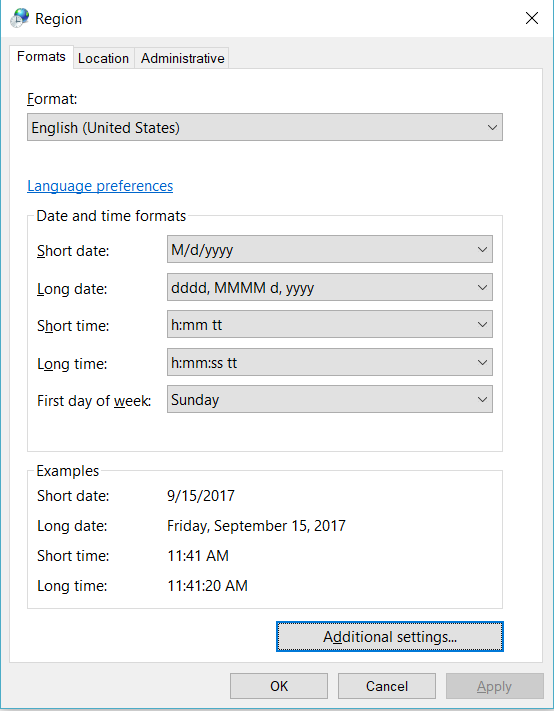 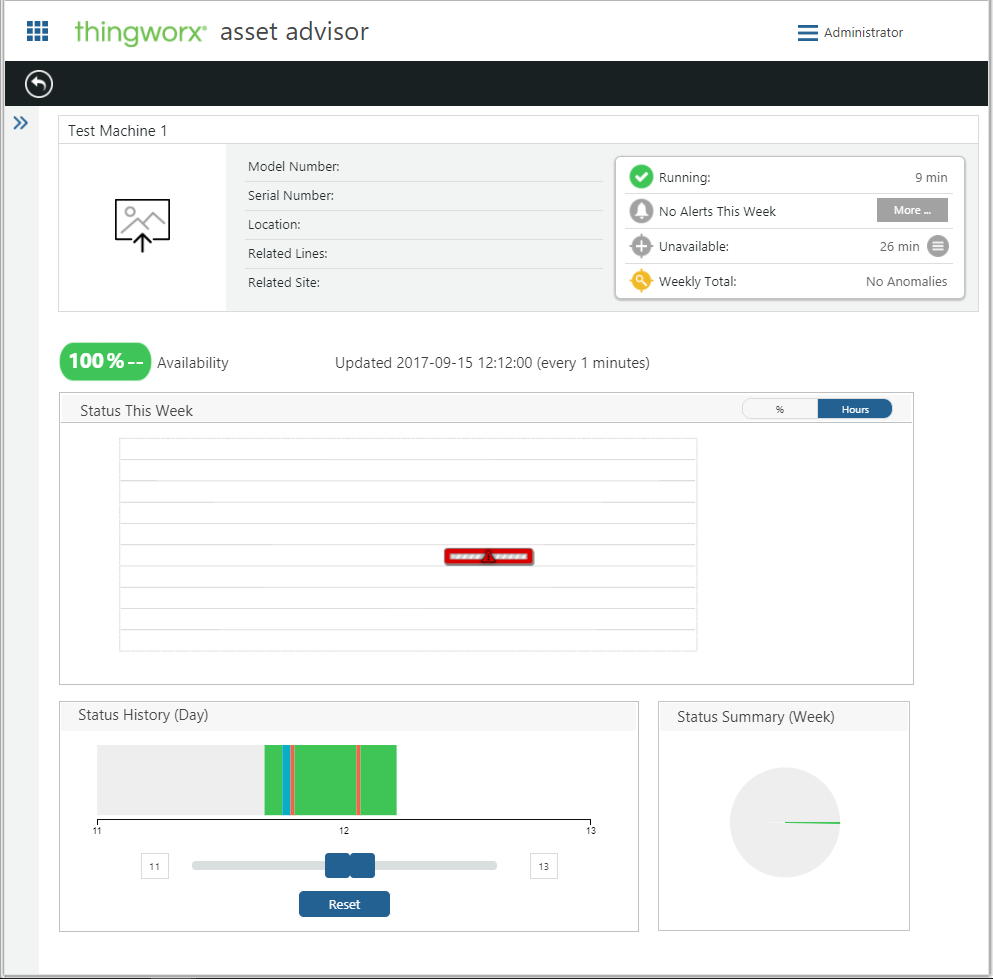 Thank you for your feedback. Yes, agreed-- adjusting the OS language settings should not be a requirement for the mashup to work. The objective now is to find a short-term workaround for you until we have a more permanent solution available.

Please confirm, did you also test setting the "Language for non-Unicode programs" to English, as well?

I switched to another laptop to setup Manufacuring Apps from scratch. After confguring everything as Stanislav described, the chart worked well as you can see below. Thanks everybody!

I'll eventually use the new laptop for customer demos, till a permanent solution is available 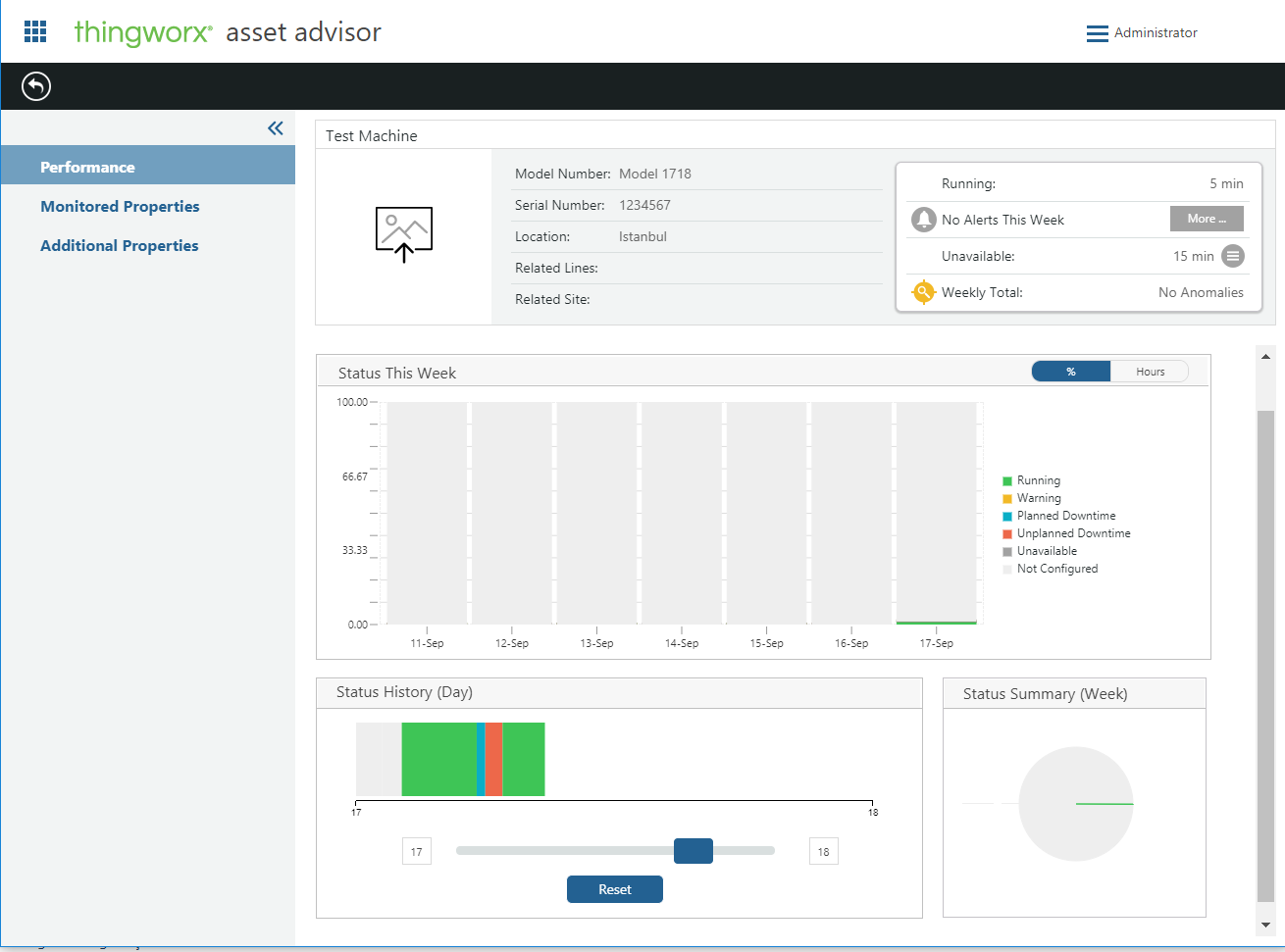 Thank you for the update. Please feel free to start a new thread if any other questions arise.