I recently found a tutorial using fusion 360 to design a cycloid, but it does not really line up to how creo works (https://www.youtube.com/watch?v=jQ6LQBFZXmU).

If there is any easy way do design a cycloid in creo im all ears, i have found a document creating one using parameters and relations but its all in mandarin and the relations dont make any sense or match up with other equations ive seen.

For grins I just ran through this same exercise following what the guy did in the video. It's not too difficult. Let me give you the synopsis. The cycloid disc is the hardest part.

Adding @SRajoelina - Do we have this topic covered in our training courses?

For grins I just ran through this same exercise following what the guy did in the video. It's not too difficult. Let me give you the synopsis. The cycloid disc is the hardest part.

Wow that is super thorough! It looks like the process is very similar up until you need to offset the spline, which is done in the sketch instead of out of it. I thought i tried that but maybe i did it wrong. I will give this a go, looks like i should have good luck with this walk through!

Thanks for jumping in, @MatthewMHuybrec ! Just for my own education - is this topic covered in any PTC University tutorials or classes?

No, there is nothing like this in any of our PTCU content. We are going to start creating courses we refer to as "outcome-based" courses, and this would be a great example of an outcome-based course. The outcome is that you have a completed cycloidal gear assembly. That course would cover Sketcher, Part mode, Assembly mode, Assembly Connections, Relations, Parameters, and Mechanism. I think it would be really cool course, but also very niche.

Any chance you have these models and could share I am struggling with the sane problem and would really appreciate the hand.

There are better options in Creo than in fusion 360

So instead of fitting trough points you can use either sweep trajpar equations or even easier if you just use datum -> curve from equation. The entire hypocycloid equation is simply

Set the range to 0 to 360, you can promote the named variables as parameters if you wish. Then just create a sketch chose offset and that curve type in your roller radius, done. 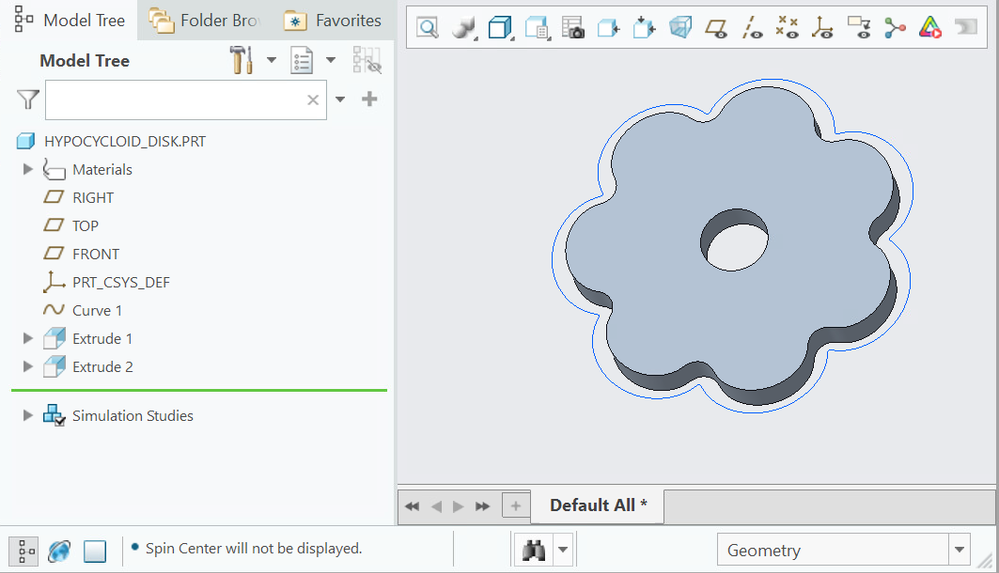 NOTE: This works if you don't have a point where the point skids (which makes your design last longer, if you set parameters that skids then your function will just loop). If you do then you need to do it in segments like in the example, but still its better to use curve fitting instead of point fitting as the curve fitting ets it right even at the start of the curve.