I have a part in which I want to create a Datum named A.

When I attempt to, I get the message "You have entered a name A that has already been taken"

I have turned on every item in the tree under Tree Filters.

I have searched the model, but no features, datums, etc with the name.

Is there something I'm missing?

Your Extrude 1 has two sketched features, one of which is a construction circle. If you change it to geometry you will see datum A. 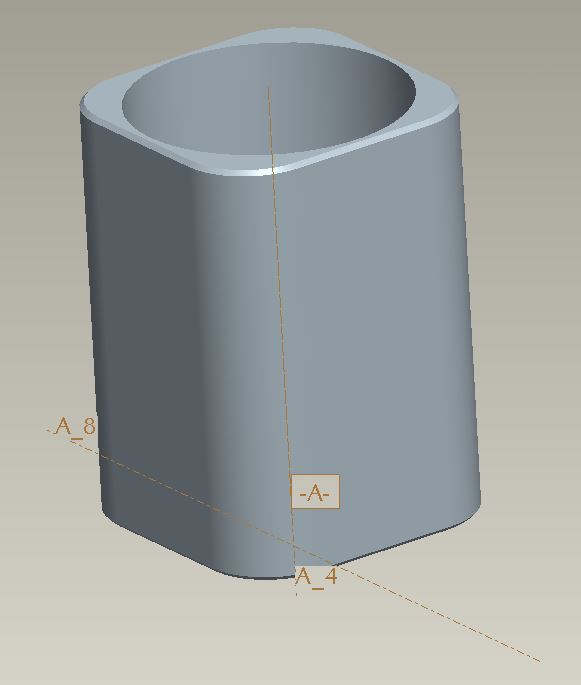 Brian, you might look to see if you suppressed a datum plane called A.

I can take a quick look at your file if you like. Use the advanced editor (upper right of the message window) to attach files.

Have you looked for embeded features? In earlier releases you could create what were called datums on-the-fly which, if I remember correctly, could cause problems. These were different from the ones you see now in that they were used at the time of feature creation and didn't show up in the model tree. When updating to a new version of ProE the feature would give you an indication of the problem but it would show up as a missing reference.

Just so we are on the level...

I have unsuppressed every object.

I have expanded every branch.

I have done all these things.

I even looked throughout the drawing for the part to see if someone had previously generated a drawing entity named "A" that is preventing the part from having the same name.

What I ultimately did was delete features in the tree until I was allowed to create a datum/feature with the name "A."

It ended up being the in the "Extrude 1."

But even though I searched the reference viewer, I find no mention of a feature or reference named "A."

It was a simple enough part, I just deleted the initial extrude and rebuilt the model, but I would like to know what I'm missing to solve future problems.

There is a cross section "A," but even though I may delete it, I still can't create a feature named "A."

I checked all the dimensional names and none of them are "A."

I was really hoping that there is a utility for cleaning part files.

I'm very familiar with CATIA V5 and it has a built in utility called CATDUA V5 that cleans the file of check sum errors, faulty data, bad links, etc. 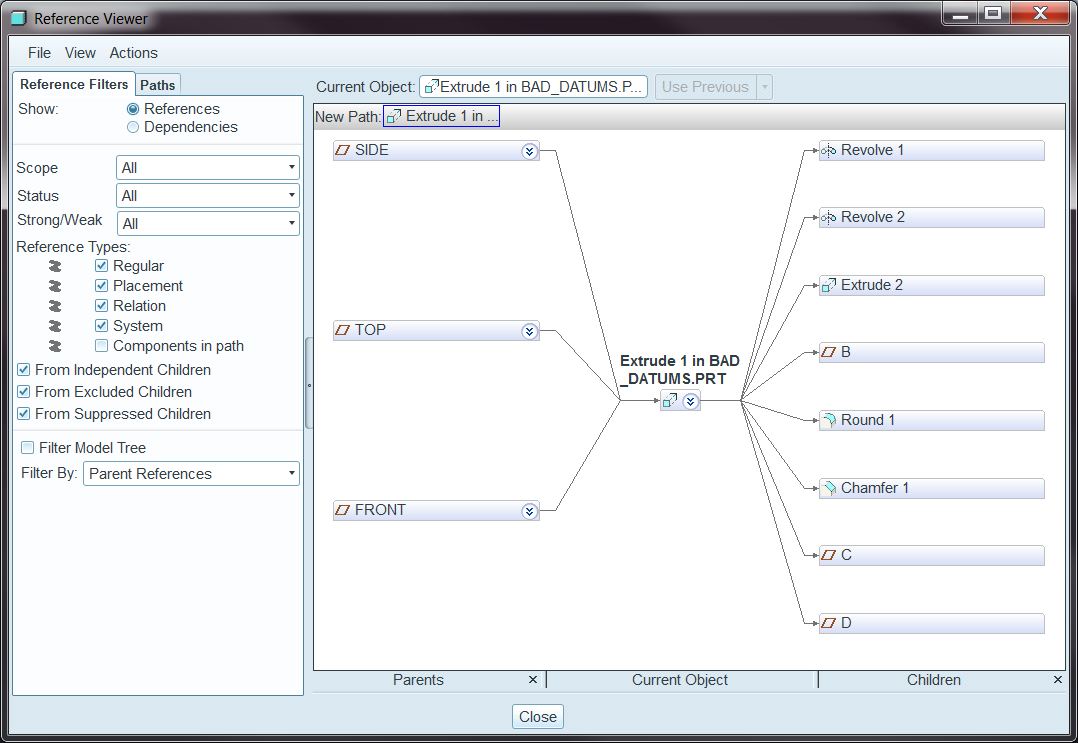 It's possible that an axis is created that is part of the feature and the axis was assigned the name "A".

It does sound like it could have been a datum on-the-fly. I don't think it would show up in the reference viewer but not sure; it wouldn't show up in the model tree. You would be able to edit the definition and see the feature extruded to a reference that's not there. I'll look at the file tomorrow and let you know if I find something. You also might try ModelCHECK to see if it finds a reference to A.

Looking at the file, I'd say you have something stuck.

First of all, these kind of problems can drive you buggy. When I get these, i now submit it immediately to customer service to get it fixed or explained. It saves a lot of frustration, ...and time.

I did find a Datum Target that is "suppressed" or "incomplete". You will only see it when you show datum axis annotations in a drawing... don't ask how I found it, but its there. it may be assigned "A" but there is no way to know.

And then the 2 points have GD&T tolerance control features tied to them and they too are "incomplete" in the fact that I can't seem to find a way to see or show them.

Alas, even with all these features deleted and saved under a new name, the problem still exists. Certainly not the first time I've seen Ghosts. 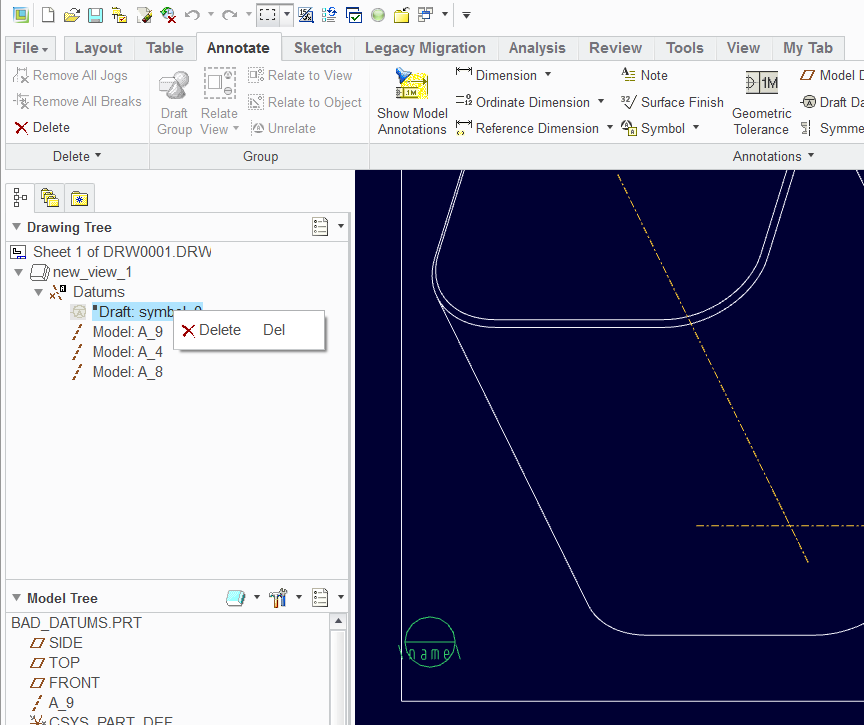 This was tested in Creo 2.0. I found nothing in parameters, relations, or search to suggest anything was coded with a property name of A.

Your Extrude 1 has two sketched features, one of which is a construction circle. If you change it to geometry you will see datum A.

Hi Keven - Nice find. I figured it for a datum axis, but did not expect the twist of converting it back to construction. So good of the software to hang onto a reference that was no longer valid.

On the other hand, consider that there are 20+ other letters that can also be used for datum identification. Why is it that people go nuts from seeing letters besides A, B, and C on a simple part? Would it have been so bad to give up on [-A-] and use [-B-] ?

The other thing to note is before deleting the circle, if that is your intent, complete the feature with both and rename the datum A to something else, A_1, and you should be able to use A for a different datum. If you delete the circle before renaming you'll have to delete extrude 1 to be able to use A.

I would've never guessed that.

My guess is that this part originated as a cylindrical part and then was copied to a new P/N and the extrude was changed from a round to a square profile.

I passed on this info to my colleagues in my engineering group.

I agree that treating datums this way is a bad practice.

Thanks for your help!

Not sure if you can do this on CREO Elements/Pro 5.0, but try using the feature search and look for a datum called A and if it finds one rename. Do you use set datums for gtols. It could be someone has set a surface as datum A.