Here is a full list of the new features and functionality in ThingWorx Studio.

A lot of people now having issues with the new release! We cannot seem to publish Experiences up to the server. I guess more people will have the same issue as us.

Hi Brian, We are looking into this. Thanks for the information!

It would be nice if we could get a list of some of the top bugs that have been fixed with each update. This is because as I work I might experience something strange that could be a bug and then in future I avoid doing that thing in that way but it might be a bug that has been fixed in a newer version of which I wouldn't know about.

For example a problem I have been having recently is that the binding with the external data properties would not update in real time so instead I bound the service getPropertyValues as a work around which is a little more cumbersome to do than rather just binding the properties. 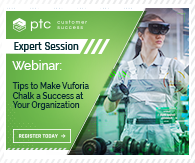