I would like to remind all users that, with respect to the unit of measurement corresponding to 1000.0kg, there are differences, depending on the country where you are, and that Mathcad takes this into account. so you have to be careful:

Thanks for the information. 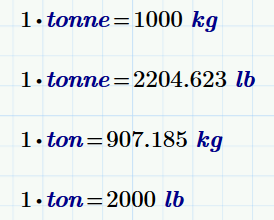 Thank you for completing

In order to avoid this confusion between ton and tonne in Mathcad 15, I have set ton = 1000kg at the beginning of each worksheet.

I tried this same method with Prime 7, but the it does not seem to work with Prime.

Is there some simple way around this?

In order to avoid this confusion between ton and tonne in Mathcad 15, I have set ton = 1000kg at the beginning of each worksheet.

I tried this same method with Prime 7, but the it does not seem to work with Prime.

Is there some simple way around this?

Sure, look up Styles in the Mathad Prime Help ... 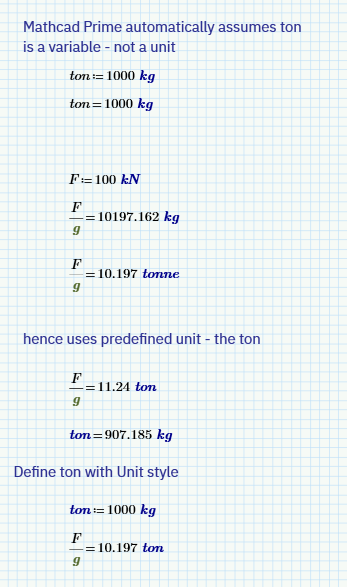 Improper use of Style will cause errors and confusion:

In order to avoid this confusion between ton and tonne in Mathcad 15, I have set ton:=1000kg at the beginning of each worksheet.

I tried this same method with Prime 7, but the it does not seem to work.

Is there some simple way around this? How can I redefine "ton"?

what is missing is

Regarding the force, I would like to add, and to remember that:

Way back, when I was in school and introduced to the "metric system," the one major advantage that I saw over the "English" system was the complete separation of terminology between mass and force.  Mass was grams, or kilograms; force was Dynes or Newtons.  Things were clear, not like the English system where pounds could be force or mass.  Equations were much simpler--devoid of the hated "g".

I was (and still am) very disheartened when I encounter a "kilogram force".  I have been forced (by location) to learn and use the English unit system, and have gotten used to it.  But please, please, please:  Hold firmly to kilograms and Newtons, grams and Dynes.  Practice the true religion; put "kgf" behind you!

You're absolutely right, but those units are used, especially in engineering, as you well know,  when it comes to large masses or forces so write numbers relatively small, otherwise, for exmple, to write 10 tons (tonnef), you should write 98066,500N.

Or, using the popular argument for metrics and prefixes, you could write 98 kN.

What to say ... maybe the engineers, civil and mechanical, they like tons, which is a very common unit. On construction sites, for example, not all the staff know, what is a Newton, but if we talk about tons, everyone understands immediately what it's about.

The point is, everybody doesn't understand.  How many posts can you name where the confusion between mass and force is the crux of the problem?

Does not exist this problem among professionals.

I was referring to the workers (masons and carpenters or builders) in construction sites.

In 1975, when the conversion of the USA to metric was "imminent," there was an article (in the AIAA monthly magazine) regarding the conversion from lbf to kgf, and all the confusion it was going to bring.  (One of the two times I was engaged enough to write a letter to the editor!)

As an aside, my uncle (a "roughing carpenter") refused to even consider metric, not because of the force/mass conundrum, but because he had memorized all of the standard slopes required by code (in inches per foot) and didn't want to try to relearn a new set of numbers.

If someone says to you "make a support for 500 kilograms", you're in troubles. If came from a civil engineer prety sure that him refer to kilograms-force, but from an intrumentist or electrical engineer it's most probably that 500 refer to a mass, not the force. The difference it's just one small magnitude order. 🙂 Nothing about to worry too much.

In Latin America we use some kind of Technical Unit System, and civil engineer use the "kilopondio" (in spanish, it is the kilogram-force) , which it's different from the british "kilopound".

Notice how different are the Wikipedia pages from spanish: Kilopondio - Wikipedia, la enciclopedia libre and from english for the equivalent word (or the linked page): Kilogram-force - Wikipedia . In the english version they talk about history, but not in the spanish, because it is used right now.

Those are some of the reasons that usually civil engineers use kilopondios, but not electrical. Mechanical or electro-mechanical engineers uses both (Technical and SI systems). Usually, electrical and electronic engineers figure as the most 'advanced' guys, using a little more the International system. In medicine, for example, it's very clear that doctors use calories for all those things where there are not electricity envolved, where they use Joules (for example, in reanimation equipment). Was famous the confusion in the 90's about cal and kcal, or big calories (Caloría - Wikipedia, la enciclopedia libre).

But the use of Newtons as force units it's very rare in the technical specifications. To know what a professional want, actually, you must to know him, and if not, ask what actually hi want.