Time to fill a pressure vessel, finite difference approximation is the solution?

Time to fill a pressure vessel, finite difference approximation is the solution?

I'm trying to learn a bit more of Mathcad, instead of solving problems on several lines of Excel for a finite discretization.

The problem I’m studying is a very real and common situation of cascade gas filling.

It consists of a source (infinity size for simplicity) feeding start-empty vessel (1atm) thought a regulator valve that obey a function critical or sub-critical flow rate f(Delta P), until both source and vessel pressure are equalized. Then plotting a Pressure Vs Time for that system. The pressure would ramp up (critical flow), then level horizontal to zero flow as the pressure accumulation at the end.

I want to keep the math simple, in the future to add z-factor for the gas compressibility factor.

p2=pressure vessel (to be filled)

For each infinitesimal time step, the flow rate will drop after entering sub-critical condition, as the pressure of the tank goes up until, it equalizes with 0 flow.

2) p2 is a function of moles accumulated at the tank due to flow rate at a time interval.

I know how to write a simple equation to calculate time for accumulated moles during the critical flow (fixed flow), but the sub-critical regime flow is a function of the vessel pressure that is building up.

I'm stuck after some day reading posts, the math should not be difficult, but...

Can a differential equation be solved using a finite difference approximation? Should I try to learn program, so the pressure can be added like time steps?

Attached my file up to where I could.

Many thanks in advance,

You should not let 'an IF statement' scare you off from writing and solving a differential equation. See example below: 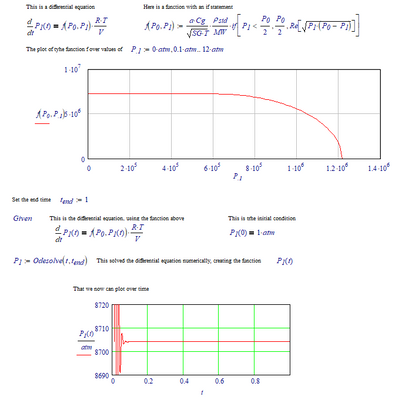 I'm NOT saying that this is the solution to your specific problem. But I AM saying that if you can write your problem in terms of a differential equation, even if it involves a function with an IF statement, that Mathcad (and Prime) may be able to solve it.

I'm not fluent in gas flow, so I just took a (simple) differential equation to make my point.

Welcome to the forum, Frederico.

Incidentally: If you are going to learn Prime, be sure to understand 'labels' of variables. You define R (the Gas constant) , but Prime already knows it, as:

Note that the R is green and bold, it's labelled as a Constant, it's different from the R you defined:

That however is not the cause of the error you see there. The reason for that is that you've used a literal subscript for the i as part of the name p2i, If you want to use i as an index to p2, you have to use index notation which you get by typing p2[i.

With your help, I have now finally understood the another example using the correct index notation.

About the differential equation, I'm stuck, because I wrote it as an "if" programming for two functions, also in the future I could try to compute a real gas (compressibility=variable) and that would require an external solver, maybe I shouldn't try to write the math, instead rely on a "seeded iteration" to make a more user-friendly analogy to the vessel pressure increasing?

Found this, and I'm studying: https://community.ptc.com/t5/PTC-Mathcad/Seeded-Iteration-in-Mathcad/td-p/448391

You should not let 'an IF statement' scare you off from writing and solving a differential equation. See example below:

I'm NOT saying that this is the solution to your specific problem. But I AM saying that if you can write your problem in terms of a differential equation, even if it involves a function with an IF statement, that Mathcad (and Prime) may be able to solve it.

I'm not fluent in gas flow, so I just took a (simple) differential equation to make my point.

Again many thanks Luc,

Indeed, I was scared without reason. Trying to solve symbolic gave an error that made me stop before digging deeper.

Your solution looks very neat and elegant, I will get inspiration on that.

I think I got it right after rewriting the flow equation for mol "substance", instead of the pressure building. Used a constant name C1 to gather V/(RTz), so the pressure is linear related to the mol flow. That gave me mol/s, and the differential equation was easy integrating. 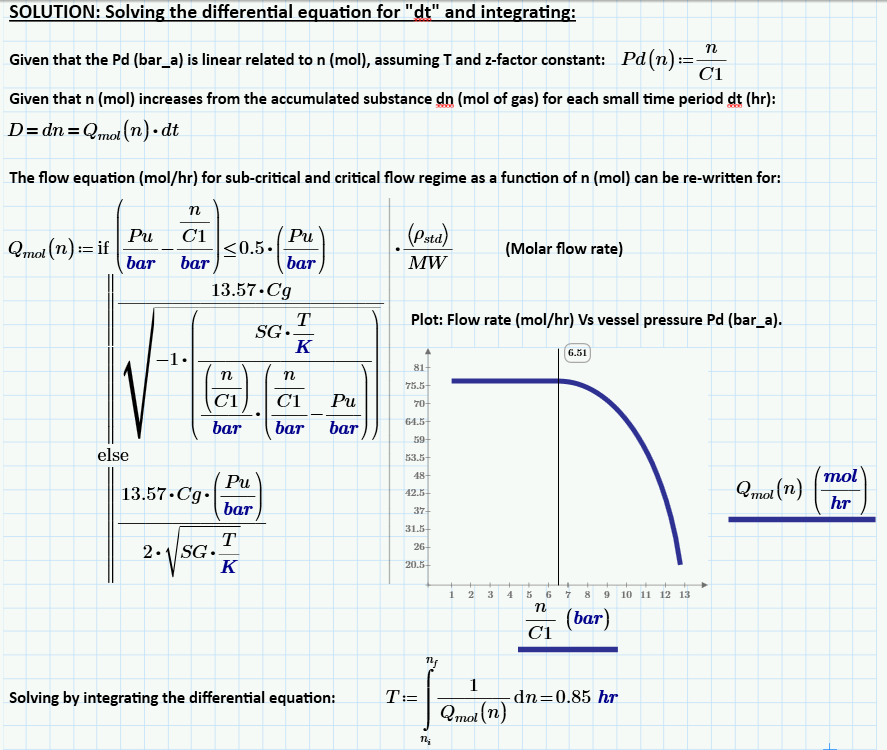 I gave it another try: 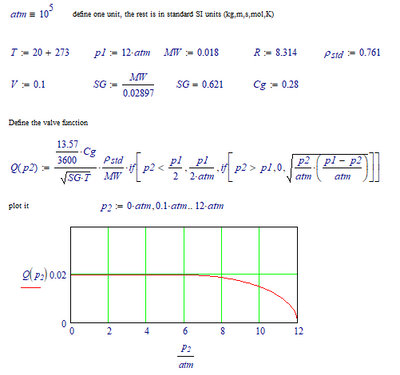 Now we can solve p2 pressure over time: 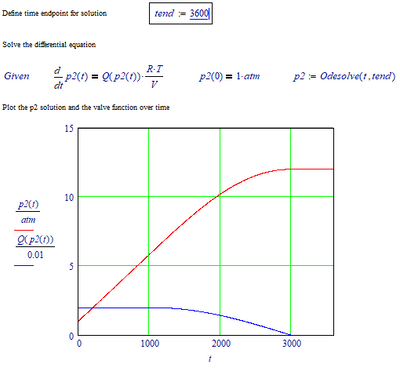 Applying some of the things I was taught resulted in a slightly longer time.

Wonderfully made, Fred. It gives a new perspective using the sonic equation and Cp/Cv.

The gas on the example was natural gas, and the regulator does have a very small orifice, I used this small size to create a very slow compression and keep the process isothermal for a typical 100L tank. At my stage of learning MathCAD, I would not even consider dealing with change at Temperature (and also z) during pressure build to compare to a real-life application.

Again, many thanks. It was great to learn with your help.

With your help, I learned the index instead of subscript from the other example I was studying.

The reason I can't find the differential equation in my sheet is because it is an "if" programming for two conditions (or my math skill?).

In Excel, I would divide time in rows of small steps (dt), calculate the new pressure accumulated from the "if" flow equation (p1, start pressure of p2), multiply by (dt), hold this small pressure increase (dp2) and feed it to the next line. Row by row, the pressure will buildup until there is no more flow, as the pressures p1 and p2 equalizes. Then sum all the (dt).

Should I look for a seeded interaction? I guided example?

There are various ways to solve differential equations; the one (perhaps) best suited to your approach is the one that Prime Express can still do.

Attached is a simple example, a damped harmonic oscillator.  The equation is solved by taking small time steps, the "trick" is the yellow highlighted vector set of equations.

Excellent hint. Many thanks Fred.

I'm taking inspiration to get to this level soon.