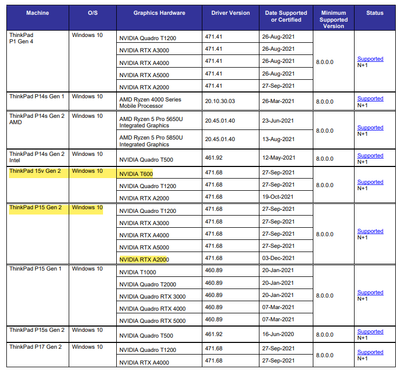 Thanks! User fedback of this card is very important for me.

Order shipped, I hope the set will be good for my requirements.

i7-11850H/32GB RAM/RTX A2000 4GB (P15 2gen.) will be faster when regenerating and rendering Creo models. If only these options are available, and cost is not a consideration get the faster machine.

Hello!
Thanks for your reply!

Just out of curiosity - for what applications ( besides rendering and regenerating ) would quadro technology be better?

The video card is not used to regenerate Creo features, that is handled by the CPU so you want the fastest CPU clock speed you can get. Creo is for the most part does not use multi-threading so single thread performance is of primary interest.

I am not an expert on GPUs but the RTX advantage is marketed as a faster rendering engine. The RTX would in theory run Creo Simulation live faster as well but the min suggested memory for GPU for simulation is 8GB. Both of these supported cards will work fine for Creo modeling.

For large assemblies I would prioritize motherboard RAM and CPU speed over the video card. So I would choose a non RTX GPU with more GPU memory over an RTX card with less memory.

I have a workstation with a Quadro M4000 GPU (8GB) from 2015 that handles any models/assemblies without issue.

Thanks for this post!
You wrote about more memory, but unfortunately I have to choose between these two proposals. Both cards have 4GB of memory each.

We currently spec the RTX A2000 for our ME computers. We work on extremely large assemblies (tens of thousands of parts) and the cards perform well. As others have mentioned, clock speed is king in CAD. If you can get a better CPU, you'll be better off. The card in question will likely work for you but it's always good to benchmark if you can. We do occasionally hit limits but most of the time it's related to users downloading overly complex CAD and being too lazy to simplify.

Thanks! User fedback of this card is very important for me.

Order shipped, I hope the set will be good for my requirements.